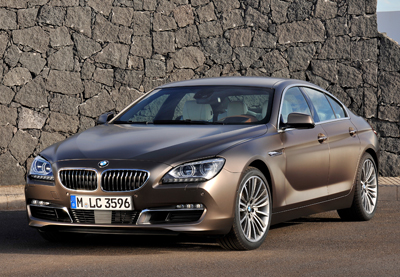 The BMW 6 Series Gran Coupe, a new four-door version of the redesigned BMW 6 Series goes on sale this summer, joining a rapidly expanding list of coupe-like sedans such as the Mercedes-Benz CLS and Porsche Panamera.

The 2013 BMW 6 Series Gran Coupe is a four-door model. Until now, the 6 Series had been a two-door, with a sweeping hardtop or convertible soft top. This latest entry into the 6 Series line-up adds another pair of doors for what BMW aptly calls 4+1 seating.

Despite the added inches, the new Gran Coupe looks familiar, with classic BMW kidney-shaped grilles, upswept headlamps and creased hood. Those lamps are xenon, though BMW is offering a new LED option. The Gran Coupe is distinguished by a crisp line running from front fender to taillamps and the rounded roofline brings to mind the Mercedes CLS as much as the BMW 6 Series Coupe. The good news is that BMW designers have avoided the bubble butt that generated so much controversy with the Porsche Panamera.

To get a bit more headroom, BMW came up with a crafty way to scallop the headliner. But while the maker has placed three seatbelts in the rear, you’ll likely not want to squeeze three adults in the back seat, which the maker tacitly acknowledges with the 4+1 designation. We prefer to think of it as a four-seater.

BMW retuned its TwinPower Turbo 3.0-liter inline-6, which now makes 315 horsepower and 330 pound-feet of torque, with 0 to 60 times rated at 5.4 seconds, and an electronically limited top speed of 155 mph. Using the European test cycle, BMW claims a city/highway 30.1 mpg, though the U.S. government numbers won’t likely be available until this summer.

The third model, the 650i xDrive Gran Coupe will feature the BMW’s all-wheel-drive system.

All models will be equipped with an 8-speed automatic transmission.