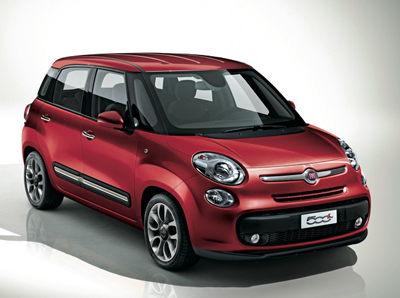 It’s been a tough comeback for Fiat. After a two-decade absence from American shores the Italian maker got off to a slow start, last year, the little Fiat 500 sedan generating barely half the sales volume originally forecast. Perhaps no surprise; American motorists have seldom embraced small cars, with a few notable exceptions such as Britain’s sporty Mini.

This year could paint a brighter picture for the Italian maker.

For one thing, U.S. motorists are racing to downsize as fuel prices soar to near-record levels. And Fiat is rapidly expanding its line-up, adding a stylish Gucci Edition, a racy 500 Abarth, the open-air Cabrio and, late this year, the all-new 2013 Fiat 500L.

L stands for Large, at least when compared to the standard Fiat 500. The stretched 500L model, which made its debut at the March 2012 Geneva Motor Show, puts the emphasis on practicality and substance: That translates into two more doors and an extra two feet, nose-to-tail. Even so, the 500L remains one of the smallest cars on U.S. highways. At 163.0 inches, the Fiat 500L measures just a hair longer than the Mini Countryman. It looks like a micro-wagon.

The added doors make for significantly easier ingress and egress than with the three-door Fiat hatchback. Initial indications suggest the four-door version of what Italians call the Cinquecento should deliver tight but usable rear seats, as well, along with enough cargo space to handle a trip to the supermarket, if not the local Costco. Of course, anything would be an improvement over the three-door’s meager 10 cubic feet.

Ask those who’ve seen the new Fiat 500L to describe its styling and you’re likely to hear frequent reference to the Mini Countryman. Take the base 500 and stretch the rear like taffy, add a wraparound windshield with almost retro-styled front quarter-windows.

For the U.S., we’ll likely see the modified, American version of the 1.4-liter gas engine. That’s acceptable in the three-door 500, though at just 101 horsepower it could prove a bit anemic in the larger car. The bigger 500L just might also get a version of the Abarth’s turbocharged I-4, which makes a more acceptable 160 hp. We’re not sure. (For the European market, the Fiat 500L will feature two gasoline engines: a 900 cc, two-cylinder version of the maker’s MultiAir engine, and a 1.4-liter version, both running on gasoline. There will also be a 1.3-liter MultiJet diesel.)

Initially, the Fiat 500L will be offered only in front-wheel-drive configuration, though insiders hint they’re looking at adding optional all-wheel drive, which would be borrowed from the European Fiat Panda that shares the same underlying platform as the 500L. The Fiat 500L will be produced at the Fiat plant in Kragujevac, Serbia.

Fiat won’t provide many details until closer to the sales launch of the 500L. In fact, it’s not even saying precisely when that introduction will be, though we expect to see the Fiat 500L reach U.S. shores early in the 2013 model year.

One thing Fiat executives did hint at is the likely availability of a wide range of interior and exterior color combinations, body decals and other customizable options, again, borrowing some tricks from the Mini playbook.

Pricing? Something else we’ll have to wait and see, but figure on a starting number somewhere in the mid-$20,000 range, say our well-informed sources.