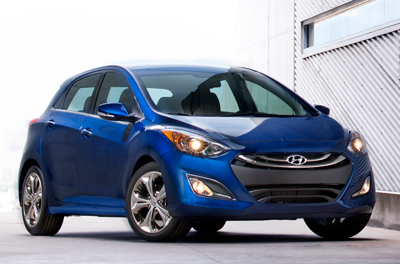 If you’ve somehow missed the big news about Hyundai in recent years, the new Elantra could come as something of a shock. Long known for products that might have been politely described as cheap and cheerful, Hyundai has shifted gears and is now putting an emphasis on cutting-edge design, segment-leading fuel economy, vastly improved quality and a premium level of content.

No wonder the new 2012 Elantra, voted 2012 North American Car of the Year in January, is in short supply. Demand is only likely to grow when the Elantra GT goes on sale this coming summer.

The 2013 Hyundai Elantra GT was revealed at the 2012 Chicago Auto Show in February.

Like the two-door Elantra Coupe, also unveiled at the Chicago Auto Show, the new GT pushes forward with the design theme Hyundai has dubbed Fluidic Sculpture. First introduced on the bigger Hyundai Sonata, it features soft, flowing curves offset by sharper accent lines. On the Elantra GT, that means a subtle crease in the sheet metal running from the front of the doors all the way to the rear spoiler of the 5-door hatchback.

Compared to the conventional Elantra four-door sedan, Hyundai has made some major changes, putting an emphasis on cutting weight and improving stiffness through the use of ultra-high strength steel. Compared to competing compacts, the 2,784-pound Elantra GT is 151 pounds lighter than the Mazda3, 175 pounds more svelte than a Ford Focus and a whopping 222 pounds under the heft of the Volkswagen Golf.

With a total interior volume of 119 cubic feet, the Elantra GT is tops in segment in terms of cabin space.

In keeping with Hyundai’s new focus on outdoing the competition in terms of creature comfort features the Elantra GT delivers such standard-issue niceties as fold-down rear seats, a cooled glovebox, heated seats, foglights and Bluetooth. In line with today’s increasing emphasis on infotainment, Elantra GT comes with a 172-watt AM/FM/satellite radio/CD/MP3 audio system with six speakers and iPod/USB/auxiliary input jacks.

Hyundai also developed a trick rearview camera option that normally remains concealed behind the rear Hyundai badge. The camera pairs with the navigation system, which adds a 7-inch video display to the center stack.

The Elantra GT is outfitted with the same 148-horsepower 1.8-liter inline-4 as the new Coupe and the original Elantra sedan, which can be paired with either a 6-speed stick or 6-speed automatic gearbox.

Fuel economy is just a wee bit under the four-door, the Elantra GT expected to get 28 miles per gallon in the city, 39 mpg on the highway. For practical purposes, most drivers should expect to come close to the GT’s 32 mpg combined rating.

Appealing to enthusiasts, Hyundai has also added a new selectable steering system that can be adjusted according to a motorist’s tastes and driving conditions. Other performance enhancements include Sachs shock absorbers, higher rear spring rates and a stiffer twist-beam axle.

Hyundai has been struggling to keep up with demand for the Elantra sedan, which led to the inevitable question: Why then add two more variants of the award-winning compact? The answer is that the Elantra GT will be assembled at the maker’s main assembly plant, in Ulsan, Korea, rather than at the Hyundai factory in Alabama, providing a little more production capacity.