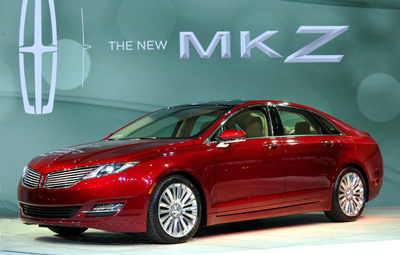 An all-new 2013 Lincoln MKZ enters the midsize luxury segment later this year. Calling it a milestone in the brand’s reinvention, Lincoln revealed the new MKZ at the April 2012 New York International Auto Show.

When it set out to design a replacement for its midsize MKZ, Lincoln knew it needed to break with the past. But the design sitting in stylist Max Woolf’s studio just didn’t seem to come together. Not until he had the almost heretical idea of abandoning Lincoln’s classic waterfall grille.

The new, horizontal look was influenced, says Woolfe, by an eagle’s out-stretched wings, one of the most dramatic design elements on the all-new 2013 Lincoln MKZ. The other eye-catching feature is the all-glass retractable roof. It’s a concept far beyond the oversized panoramic sunroofs that have become popular these days, turning the MKZ sedan into an instant convertible.

Lincoln clearly needs to break new ground to revive its once-vaunted reputation. These days, potential buyers more likely recognize the slab-sided ’65 Continental on the HBO series Entourage than the latest Lincoln sedans. But the MKZ is a stunning achievement that won’t get lost in the crowd.

Significantly, while sharing its underlying architecture with the 2013 Ford Fusion, there are no common body panels, a break from recent Lincoln strategy helping justify its premium price tag. Like Fusion, and other current Lincoln sedans, the 2013 MKZ retains a front-wheel-drive layout.

Under the skin, the new Lincoln MKZ features a 2.0-liter EcoBoost inline-4 replacing the old 3.5-liter V6 and, while delivering more muscle, will boost fuel economy by as much as 6 mpg. The target is an EPA-rated 27 mpg Combined. A hybrid-electric version, akin to the one in the new Fusion, will push the mileage number to 47 mpg, which would mean a midsize Lincoln delivering about 4 mpg more than the latest-generation Toyota Camry Hybrid.

For the moment, there is no talk of also adding a plug-in hybrid, as the Ford side will get with the Fusion Energi, but the driveline could readily fit into the MKZ should Lincoln decide to go there, as well.

While exterior styling and fuel economy are two of the most important factors when it comes to getting a motorist into a new vehicle, interior design plays a key role in maintaining customer satisfaction. The new Lincoln MKZ will feature a design strongly influenced, according to Woolf, by suspension bridge design, most obvious in the form of the floating center console which adds a layer of additional storage underneath.

With its elegant, high-gloss finish, the center stack wraps around a large touch screen display which operates many key vehicle functions, though Ford engineers and designers have this time struck a careful balance to ensure that those buttons and switches a driver frequently accesses are back on the display’s surround so you don’t have to wade through several distracting menus to, say, adjust the interior temperature.

The main gauges, visible through the steering wheel, are actually part of a 10-inch-wide reconfigurable LCD. But the concept and production car both place another layer of acrylic rings over the key instruments, the speedometer and tach, to give the gauges a three-dimensional look.