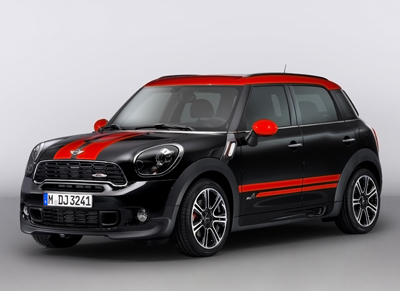 In the decade since its rebirth as part of the BMW empire, Mini has rolled out a rapidly expanding line-up of products, starting with a 3-door hardtop and adding variants such as the Convertible, Coupe and Countryman. The maker has also provided buyers a mix of powertrain options, starting with the basic Cooper and the upgraded Cooper S.

But for those with a taste for serious performance, there are the John Cooper Works editions. The JCW editions honor John Newton Cooper, a motor sports legend and one of the developers of the original Mini.

Had he lived long enough, Cooper might have been stunned by the Countryman JCW. Launched as a 2011 model, the Countryman is the first Mini crossover, the first four-door and the brand’s first offering with all-wheel drive. But until now, the largest-ever Mini didn’t offer a JCW edition. That’s about to change.

Fittingly, the John Cooper Works Countryman becomes the most powerful production model ever badged a Mini, its newly developed, intercooled and turbocharged 1.6-liter inline-4 making 211 horsepower at 6000 rpm. Torque comes on quickly and holds at a peak 207 pound-feet from 2000 all the way up to 5600 rpm. In Overboost mode, that briefly jumps to 221 lb-ft. Both manual and automatic gearboxes are available.

The sport exhaust system, with its slanting tailpipe, a subtle tribute to classic John Cooper design, helps by minimizing back pressure and has the added benefit of a distinctive soundtrack, suggests Mini.

The John Cooper Works Countryman is the first JCW model to drive all four wheels. Four-wheel drive helps keep the extra power connected to the pavement, allowing the stick model to launch from 0 to 100 kmh (0 to 62.5 mph) in just 7.1 seconds. The automatic needs an extra four-tenths of a second to get there.

Pressing the Sport button engages a more aggressive throttle response and firms up the steering.

The Countryman’s body, meanwhile, is fitted with an improved aerodynamic kit, including muscular front and rear aprons and side skirts. The JCW rides on 18-inch Twin Spoke alloy wheels, though 19-inch light-alloy wheels are available.