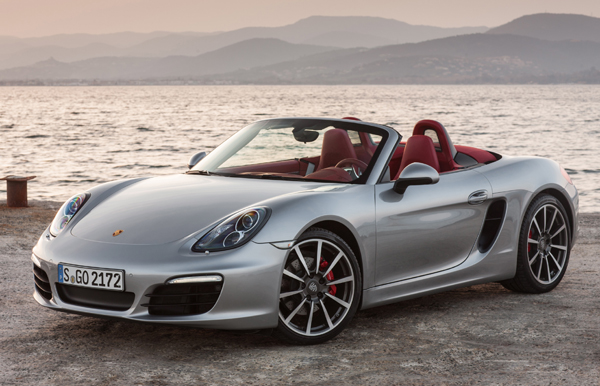 The 2013 Porsche Boxster features a lightweight new body with fresh styling and a completely revamped chassis that rides on a longer wheelbase and a wider track with larger wheels. Two six-cylinder engines are available, a 2.7-liter for the 2013 Boxster and a 3.4-liter liter for the 2013 Boxster S, each more powerful yet more fuel-efficient than the engine it replaces due to direct fuel injection and other technologies.

How far things have come since the original Porsche Boxster made its debut 15 years ago. Back then, it was one of an assortment of new German roadsters, along with the Mercedes-Benz SLK and the BMW Z3, aiming to carve out a niche above that most affordable of 2-seaters, the Mazda Miata. That first-generation Porsche was fun to drive and arguably the most sporty and competent of the Teutonic trio, but there was a massive gap between the Boxster and the classic 911. Each successive generation of the Boxster has gotten better and better, both in terms of looks and performance. And that's clearly the case with the 2013 redesign.

This latest version is more mature than the outgoing model. The new roadster is a significant achievement that takes what has long been the entry to the Porsche franchise and moves it up several notches. While it's by no means perfect, the new Boxster is good enough to give some Porsche aficionados reason to think twice before moving all the way up to the new 911, at nearly twice the price.

Like the seventh-generation Porsche 911, the new Boxster is longer, slightly wider and a half-inch lower than before. It makes extensive use of lightweight materials including magnesium and aluminum, which results in both a lower overall mass and a better center of gravity.

We were somewhat surprised when we first heard Porsche would downsize the base engine, which drops from 2.9 to just 2.7 liters. But that proved no reason to worry, the wizards of Stuttgart still managing to squeeze out 10 more horsepower than before, at 265 hp. Torque did slip, ever so slightly, but not enough to negatively impact performance, we quickly discovered.

Better yet, the 2013 Porsche Boxster winds up eking out a full 3 mpg increase in highway fuel economy: now rating an EPA-estimated 32 mpg Highway with the 7-speed dual clutch gearbox.

For those who want more performance, there's the new Boxster S which swaps for a bigger 3.4-liter package that takes power up to 315 hp, a 5-horsepower bump over the old Boxster S, while torque holds flat at 266 pound-feet. With the lighter mass and other improvements, the 2013 Boxster S cuts about a second off the standard Boxster's estimated 5.5 second 0 to 60 times.

If there are reasons to be disappointed they include the decision to make the optional manual gearbox a 6-speed, rather than offering the breakthrough 7-speed introduced with the all-new 2012 Porsche 911. The other gripe is with the new electro-hydraulic steering system. Okay, not a big gripe. It does pretty much everything you ask of it except deliver the sort of progressive build-up of resistance you might expect the faster and deeper you dive into a corner. That said, the steering feels slightly more precise than that on the 911, which a Porsche engineer explained was the benefit of launching the 2013 Boxster a half-year later.

But the bottom line for us is that the new 2013 Boxster is what we always knew Porsche was capable of. It's handsome, competent and as much fun to drive as the original. Okay, a lot more fun. If we hadn't seen how far the German maker could go with the latest 911 we might have thought this was the marque's flagship.

The 2013 Porsche Boxster has undergone significant revisions, including the development of a new chassis that anchors a vehicle with an added 2.4 inches of wheelbase, total length stretching a slightly more modest 1.3 inches. That translates to less overhang. The new roadster is also a wee bit lower. What's more impressive is the fact that the base car sheds 55 pounds, the Boxster S dropping 77 pounds.

The Porsche Boxster's mid-engine layout is a critical defining factor in design, but the design of the new 911, a rear-engine car, has clearly influenced the new Boxster's overall styling. We think some folks may mistake the new Boxster for a previous-generation 911 cabrio.

The windshield has moved forward by about four inches, while the new Boxster's tall front fenders and sloping headlamps bear a clear hint of 911 to them. The sculpted side panels, which flow into deep air scoops just behind the doors, bear the imprint of the Carrera GT. The 2013 Boxster features flowing LED taillamps that pinch in under the decklid just beneath the new integrated rear spoiler.

The overall look is devoid of excess ornamentation and presents a more mature look for the 2013 Boxster.

The Boxster is a roadster and it takes a brief 9 seconds to raise or lower the top, to our knowledge the fastest of any ragtop on the market.

The 2013 Boxster is roomier than the previous version. For those who have found the cabin a bit cramped in past generations of Boxsters the new model will come as a marked improvement.

The added wheelbase has largely benefited the interior, starting with seats that can travel an extra inch rearward. Those seats, meanwhile, offer substantial lateral support, as we discovered during both some aggressive track driving and a slightly more leisurely route through the Alabama countryside. But they're also pleasantly comfortable after even several hours behind the wheel.

And looking through the steering wheel you'll discover an attractive new three-gauge cluster reminiscent of both the new 911 and the Porsche Panamera. It was the Panamera that introduced the distinctive center console where the majority of the car's switches and controls are located. That new design layout carries over into the Boxster.

The overall look and feel, meanwhile, is decidedly more refined than the Boxsters of past. As with all recent Porsche offerings the maker has been recognizing that it is, after all, as much a luxury car maker as a manufacturer of high-performance automobiles. There's no reason to settle for chintzy switches, handles and knobs and the 2013 Boxster is proof in point.

The heart of any Porsche is its powertrain. The 2013 Boxster migrates from a 2.9-liter flat-six to one displacing only 2.7 liters. It's largely the same engine and, perhaps to a buyer's pleasant surprise, it makes about 10 more horsepower thanks to some cylinder-head and exhaust revisions. Output of the 2.7-liter is at 265 hp at 6700 rpm. Torque slips by 7 from last year to 206 pound-feet at 4400-6500 rpm. But that had no discernable impact on performance: The Boxster delivers solid 5.5-second 0 to 60 times with the manual gearbox, according to Porsche, 5.4 seconds with the PDK transmission, 5.2 seconds with Sport Chrono and PDK. Premium fuel is required. Fuel economy is an EPA-estimated 20/30 mpg City/Highway with manual gearbox, 22/32 mpg with PDK.

We spent most of our time during our Alabama sojourn in a Boxster equipped with the Porsche Doppelkupplung, or PDK, or dual clutch, for those whose tongues twist into pretzels trying to pronounce German techno-speak. The reality is that the Porsche semi-manual package is so good and so quick it will be the option of choice for the majority of buyers, especially those who expect to spend significant time stuck in traffic. No clutch pedal with PDK.

We were disappointed Porsche didn't migrate the new 7-speed manual gearbox first introduced on the 2012 911 into the new Boxster, but the 6-speed manual is a fine compromise for those who can't fathom a car like this with anything but a stick.

Another debate centers around the 2013 Boxster's new electro-hydraulic steering system, a concept we first saw introduced with the seventh-generation 911. We fall somewhere in the middle of the discussion. There's no question it improves fuel economy. And, if anything, we agree with Porsche engineers that they had even more time to tweak and tune the steering system since the 911 rolled out. It is responsive and precise but it doesn't deliver quite the direct road feel of the classic hydraulic steering box.

The biggest weakness is that there is no progressive build-up, you feel the same degree of resistance in a tight, high-speed corner as you do during a moderate-speed, less aggressive turn.

Nonetheless, the overall road manners of the new Boxster are so good that it's easy to forgive that minor flaw. If anything, the new roadster only encourages more and more aggressive driving, as we discovered during our time behind the wheel both at the Barber race track, and during a couple hours of driving through the hill-and-dale Deep South countryside. We turned around after charging one particularly challenging uphill series of tight S-turns to see how much further we could press into the corner before hearing the tires chirp. It took several attempts and even then we were confident we hadn't come close to the car's limits.

Adding to our confidence was the Sport Chronos Package which features some trick magnetorehological transmission mounts. That's the same basic technology you'll find in a number of new high-performance suspension systems, including those from Ferrari, and on the Cadillac V-Series. By varying the power sent to electromagnets surrounding the mounts, which are filled with a ferrous-based fluid, it effectively stiffens or softens, all but instantaneously.

Another option introduced on the Boxster is the new Porsche Torque Vectoring system, or PTV, which uses both the locking rear differential and rear brakes to effectively shift torque from side-to-side to improve cornering.

Even without those options, the 2013 Boxster's wider track keeps the two-seater firmly planted and willing to respond to even the most demanding driver inputs.

We've always enjoyed driving the Boxster but nonetheless felt it was something of a toy, a wannabe 911 that just didn't quite have enough of the right stuff. For 2013, the new Boxster still has reason to look up to its big brother, the 2012 Porsche 911 having taken some giant leaps forward. But there's no longer reason to make excuses. The 2013 Boxster has, arguably, come even further ahead in its latest iteration. It's a far more classy package than ever before, with the refined details that a luxury buyer would hope to get in a far less competent driving machine. And once you fire up the flat-six and slip into gear you're going to find any excuse possible to keep on driving.

Paul Eisenstein filed this NewCarTestDrive.com report from Detroit after his test drive of the Porsche Boxster.