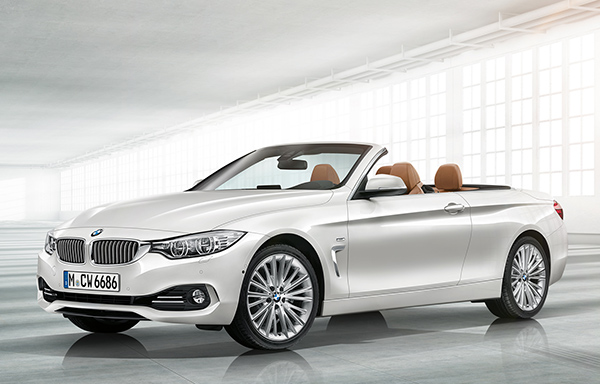 A drop-top joins the BMW 4 Series lineup, the recently launched two-door model that replaces the outgoing 3 Series coupe and convertible.

The 2014 BMW 4 Series convertible shares the same body and design with the 4 Series coupe, sans the roof and the hardtop's B-pillar.

The convertible's three-piece retractable hardtop is lined with a noise-absorbing headliner, which BMW says is quieter than the old 3 Series convertible and provides added insulation. According to BMW, the power-folding top can completely fold up or down in 20 seconds and operate at speeds of up to 11 miles per hour.

Two engine choices are the same found in the 4 Series coupe: The BMW 428i convertible uses a turbocharged 2.0-liter inline-4 that makes 240 horsepower and 255 pound-feet of torque (just a tad less on both counts than the coupe). A 428i xDrive all-wheel-drive model will also be available.

A more powerful BMW 435i convertible uses a turbocharged 3.0-liter inline-6 good for 300 hp and 300 lb.-ft. of torque, and will be available only with rear-wheel-drive.