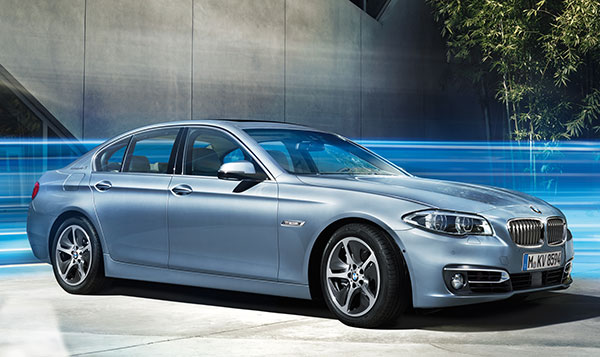 The BMW 5 Series offer a delightful balance of comfort and performance. Once known only as a four-door gasoline-powered sedan in the U.S., the 5 Series lineup has multiplied into more than a dozen variants, including a larger Gran Turismo body style, and a new diesel-powered sedan.

Mildly refreshed for 2014, the 5 Series gets a revised twin kidney grille, redesigned lower air intakes and new tail lamps. Like other BMW models on the market, the 5 Series is available in different lines: Luxury, Modern and M Sport, each with its own unique styling and trims.

Inside, the interior has been updated with standard navigation on all models and slightly more storage space, as well as new options like a rear entertainment system and personal concierge service. The updated iDrive interface also allows users to finger-trace letters and numbers on top of the control knob to enter information (similar to the touchpad found on Audi models).

The biggest news for 2014 is the 535d, available in both rear-wheel-drive and all-wheel-drive (xDrive) models, which uses a turbocharged, 3.0-liter six-cylinder engine that makes 255 horsepower and 413 pound-feet of torque. Not only does it get an EPA-rated 26/38 mpg City/Highway, but diesel's well-known range helped our 535d test car go more than 500 miles on a single tank, and that's with spirited driving. Although it has a $1,500 price premium over the gasoline-powered 535i, those who travel long distances, especially at highway speeds, could be very satisfied with their return on the money.

Gran Turismo models ride on a wheelbase extended by four inches, with 2+2 seating behind a long hood and under a coupe roofline. The Gran Turismo come in two versions: 535i GT with the turbo I6 and 550i GT with the V8. Each is available with xDrive all-wheel drive.

The performance-oriented M5 sedan is equipped with a 560-horsepower V8, available with a 6-speed manual 7-speed dual-clutch transmission with paddle shifters. In addition to minor styling updates, the Competition package is also new for 2014, which bumps up horsepower to 575, and includes a different exhaust system, minor tuning revisions and unique 20-inch wheels.

Competitors to the 2014 BMW 5 Series are formidable, including the Audi A6, all-new Cadillac CTS (now larger than before), Lexus GS and the recently redesigned Mercedes-Benz E-Class. Those considering the 5 Series Gran Turismo might also consider the elegant Audi A7, with its ample cargo space. Rivals to the high-powered M5 include the Jaguar XF-R and the Mercedes-Benz E63 AMG.

The 2014 BMW 5 Series comes in two body styles: a four-door sedan and a stretched Gran Turismo, or GT. Rear-wheel drive is standard, and all-wheel-drive xDrive versions are available. Five different engines are available.

In addition, all of the 5 Series sedans and GT models are available in distinct lines, which offer unique interior and exterior styling: Luxury, Modern and Sport.

BMW 535i and 535d models are equipped similarly, adding leather upholstery and 18-inch alloy wheels to the above features.

BMW 550i upgrades further with 20-way power front seats with four-way power lumbar, sport steering wheel with paddle shifters (along with a sport-tuned version of the automatic transmission), front and rear parking sensors and a rearview camera.

Safety equipment that comes standard on all 2014 5 Series includes front-seat side airbags, side curtain airbags, active front head restraints, stability control, traction control, antilock disc brakes, and the BMW Assist emergency telematics system with a 10-year subscription, which includes automatic crash notification. Optional safety features include the Driver Assistance Plus package, which adds an upgraded camera that shows a full picture of vehicle surroundings, blind-spot warning, a lane-departure warning and forward collision mitigation with pedestrian detection. The optional night-vision system can display possible hazards in the road the driver might not see otherwise.

Though it's been refreshed for 2014, the outward appearance of the 5 Series is unmistakably BMW. With short front overhangs and muscular flanks that seem shaped by this car's dynamic forward thrust, the 5 Series never quite looks at rest.

The 5 Series sedan cabin is set considerably to the rear, giving its profile a slightly wedged, coupe-like forward-thrust shape. Handsomely flared wheel openings filled with large wheels and tires underline the car's muscularity and its rear-wheel drive layout. The signature (Hofmeister) kink in the rear side window's aft edge confirms that this is a bona fide BMW. Adaptive xenon headlights come standard, and LED lamps and tailamps are illuminated in an LED pattern distinctive to BMW.

Gran Turismo models are even longer, and have a larger, boxier rear that sits higher up.

The interior of the BMW 5 Series doesn't disappoint. In typical BMW style, the center stack, gauges and controls are oriented toward the driver. Controls are well placed, with the driver-only functions situated to the left of the steering column or on the wheel itself. Climate controls and ventilation are easy to reach. And unlike some of the less expensive BMWs, trim pieces are well integrated, of quality materials, and don't look stuck-on like in some configurations of 3 Series and 4 Series.

Standard front seats in 5 Series sedans have 10-way power adjustment. Larger adults will feel comfortable in the spacious seats, although those of smaller stature may have a tough time getting comfortable, and could feel like they're sloshing around on twisty roads.

The standard upholstery on 528i models is vinyl, but it looks good and doesn't appear cheap. The Dakota leather found on more expensive models is nice, though we prefer the optional (yet more expensive) Nappa leather. In sedans and GT models, there isn't much bolstering to hold you in during hard cornering, even with the optional Sport seats, but that's nicely taken care of in the M5, which will cradle your every move.

Navigation is now standard for 2014. Paired with BMW's iDrive interface, the nav is easy to use, once you get the hang of it. With the optional head-up display, navigation guidance can be read on the windshield just above the steering wheel.

Gran Turismo models are better for hauling people and cargo, with 39.9 inches of rear headroom and a plentiful 40.6 inches of rear legroom. Trunk space measures 15.5 cubic feet with all seats in place, up to 60 cubes with the rear seats folded down.

All BMW 5 Series sedans are chic, crisp and distinguished for their aggressive styling and driving character. For the most demanding sporting driver, they are big and heavy, but their excellent dynamics and agility make them assertively proactive and manageable when faced with the necessity of an emergency avoidance maneuver, making them excellent family sedans.

We found the BMW 535i and 550i to be controllable at high levels of acceleration, stopping and cornering on the racetrack. But the BMW 528i displayed exemplary quickness and agility, which was also noticeable on the street.

The 535d is powerful, smooth and capable. As expected from a diesel engine, it provides plenty of low-end thrust. We took our 535d on a road trip from Los Angeles to Palm Springs, and tackled the hills between the Inland Empire and the desert with ease, passing scores of other vehicles slogging up the steep inclines. Compared to old diesel vehicles, noise and vibration from the 535i is much reduced, though we did notice its distinctive rumble around town at low speeds, and recognized its unmistakable sound from around the block when it was delivered by the valet.

Another advantage to the 535d is its marvelous range. We got about 500 miles on a single tank, and that was mostly while driving with a heavy foot in Sport mode. EPA fuel economy estimates for the 2014 BMW 535d rear-wheel-drive model are 26/38 mpg City/Highway and 30 mpg Combined. During our excursion, our mileage, according to the trip computer, ranged from 27 mpg to 31 mpg, averaging 30.0 mpg for our 500-mile trek.

All 5 Series models, with the exception of the M5, use an 8-speed automatic transmission. Because the top two gears are overdrives, keeping freeway revs down, the fuel mileage is helped.

Steering on the 5 Series cars is electronic and uses variable ratio tuning, which makes it comfortable and stable on highways and straightaways, yet more precise and responsive around corners and for low-speed maneuvering. Though some bemoan the changeover from the hydraulic system once used on BMWs, we find the current steering setup seamless and precise.

To heighten controllability and give the driver an improved platform, available dynamic damping control constantly adjusts shock rates to match the current road surface. The system is so fast that when a front wheel hits a pothole at highway speed, the rear shock absorber will be prepared for it before the pothole arrives. In addition, active roll stabilization curtails body roll in hard cornering, giving the driver heightened command. BMW's advanced electronics work well. Breaking with BMW practice, the front suspension eschews struts in favor of multi-link arms.

The latest BMW brake system interacts with the other electronic stability control systems, pre-setting the brakes in heavy braking, drying the brakes in wet driving, and compensating for brake fade in vigorous driving. The brakes also have a hybrid-like regenerative-energy feature; they capture electric energy generated during braking and send electricity to the battery. This reduces the net amount of time that the engine must drive the alternator producing charge. This cuts the amount of time the engine must drive the alternator belt, heightening fuel efficiency.

The 5 Series use BMW's automatic Stop/Start system, which stops the engine when the car is not in motion to conserve fuel. We don't care for this system because of its abruptness. It engages quickly, just after a few seconds of idle, and will fire the ignition with just the slightest lift of the brake pedal. We question how much fuel it actually saves; it seems more about earning government credits than actually benefitting the owner.

The M5 is totally different than the other 5 Series models. It starts with the twin-turbo 4.4-liter V8 engine and the same frame, but after that the parts are something else. Electronically controlled dampers, M-specific Servotronic steering, a stability control system with M Dynamic Mode, active limited-slip differential, high-performance compound brakes, suspension structure and sub-frame mods, and more.

At Laguna Seca, a winding road racing circuit near Monterey, California, we found the M5's 560 horsepower and 500 pound-feet of torque available over an amazingly wide power band, from 1500 to 5750 rpm. The BMW M5 accelerates from 0 to 60 in 4.2 seconds, with an electronically limited top speed of 155 mph, We drove test cars with both the 6-speed manual transmission and 7-speed twin clutch with paddle shifters. The automated manual is faster, but those who like rowing through the gears old-school-style will be happy the M5 is still available in a stick.

Suspension, throttle and steering quickness can be individually set in Comfort, Sport and Sport Plus modes. The instrument panel, exclusive to M5, shows what modes you're in. There is flexibility and range in the modes, and that's a good thing.

We think the BMW 5 Series are some of the best midsize luxury cars on the market. The 5 Series includes two body styles and a range of powertrains from efficient to powerful. The diesel-powered BMW 535d offers maximum torque and range. Gran Turismo models are larger and offer more passenger and cargo space while retaining 5 Series driving dynamics. The M5 is very fast, but pales on the track in comparison to newer offerings.