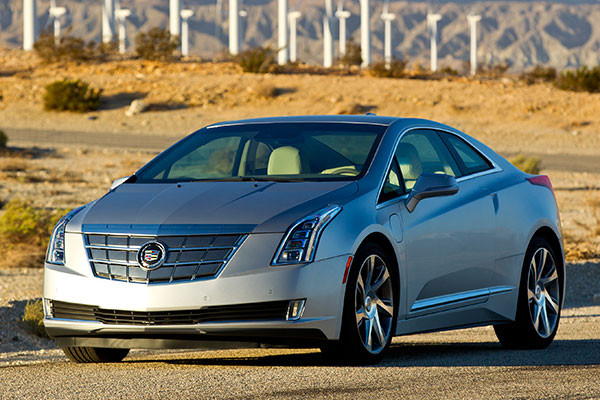 The 2014 Cadillac ELR is an all-new electrically powered luxury sport coupe based on the Chevrolet Volt’s extended-range electric vehicle (EREV) platform and powertrain. Yet it carries a starting sticker price nearly twice as high.

Whether that can be justified depends on your priorities and pocketbook. On the plus side, this very sharp-looking ELR is much sexier than the Volt and offers more athletic handling, somewhat stronger performance, a true luxury interior, a plethora of features and the upscale Cadillac badge and image. On the down side, it’s a tight-back-seat two-door with a near-$80K price tag.

Most automakers now market pure electric (battery only) vehicles or gas-electric parallel hybrids, but only GM offers extended-range electric vehicles, or EREVs: the Chevrolet Volt and this new Cadillac ELR. Operating as series hybrids (the engine powers an electric generator, not the drive wheels) most of the time, both run on battery energy alone for the first 30-40 miles before an 84-hp 1.4-liter gas four-cylinder fires up to drive a 55 kW generator to keep them going. Total system output is 162 hp and 295 pound-feet of torque.

Pure electric vehicles are expensive (mostly due to high battery cost) and have the dual drawbacks of limited range and long battery recharge times, sometimes leading to range anxiety: the fear of running out of volts before you run out of trip. Parallel hybrids, which save fuel by efficiently blending battery electric and engine power, cost less than EVs but more than conventional vehicles, and even pricier plug-in parallel hybrids with larger batteries for more electric-only range typically consume some fuel even on short, slow trips.

The advantage of an EREV is that it drives those first 30-40 miles before consuming the first drop of fuel. Owners with short commutes to work can recharge overnight and avoid using any gasoline, driving to and from work in electric mode. Run the battery down and the engine starts, it becomes a fuel-efficient car that will go as far as its tank of gas will take it, so no range anxiety. You need only refill the gas tank; there’s no need to recharge the battery until the next convenient opportunity. In short, it’s a great setup. The major disadvantage is high price from a large, expensive battery and a lot of added cost in its dual propulsion systems and the hardware and software that make it work.

But why is the ELR twice the price of the Volt? Partly because it’s a Cadillac and not a Chevrolet. Partly because the ELR boasts a leather-lined Cadillac cabin, ride-smoothing and handling-enhancing Continuous Damping Control with selectable modes, Regen on Demand steering-wheel paddles that slow the car when you want (while regenerating energy back to the battery), and a lot more that the Volt doesn’t.

Cadillac has been building its brand image around the mantra of Art and Science (meaning high style and technology) since its sharp-edged 1999 Evoq concept sports car, which evolved into the 2004 Cadillac XLR sports car followed by the first (2003) CTS sports sedan. Both elements of it have come a very long way since, and the ELR carries Cadillac Art and Science to its highest level yet. But is it worth $75-80K?

In two very different driving experiences, a brief spirited romp in California and a week-long relationship in frozen-Tundra Michigan, we found the ELR a delightful ride in most ways. With eight-second 0-60 performance, it’s quick enough to be fun to drive, and its twisty-road handling is surprisingly good despite its two-ton curb weight. Its downsides are a weak-kneed heater (consistent cold feet in single-digit temperatures) and its Cadillac CUE infotainment system, which (like most) has drawbacks and requires a learning curve.

If you would like and can afford a sexy-looking, feature-loaded luxosport coupe that’s both fuel efficient and fun, that can run on cheap grid power without burning any gas most days then keep going on gas when its battery runs low, the ELR is your only choice. For an even more expensive long-range, big-battery pure EV, your only answer is the $100K Tesla Model S sedan. For a more affordable family EREV, it’s the $40K Chevy Volt.

Barely changed from the 2011 Cadillac Converj concept coupe that previewed it, the 2015 Cadillac ELR cuts a dramatic wedge profile with sharp creases, aero-rounded edges, aggressively raked front and rear glass and big 20-inch wheels pushed nearly to the corners of its body. In what has become a Cadillac signature feature, its headlamps and taillamps are finely detailed vertical LED blades. Its door handles are hidden in recesses behind the doors, its battery charge port is on the driver's-side front fender, and lights on its outside mirrors pulse green during charging, then go dark when the process is complete.

Cadillac has been doing world-class interiors lately, and the ELR's plush, quiet, well-crafted cabin is no exception. Chrome and wood accents, a leather/suede microfiber trimmed steering wheel and a suede microfiber headliner nicely complement its leather-trimmed 2+2 seats. There's even choreographed LED accent lighting and (for some reason) a power-assisted console cup holder cover.

As with the Chevrolet Volt, the Cadillac ELR uses a 1.4-liter four-cylinder engine that drives a 5.5-kW generator to power the drive motor once the 16.5-kWh lithium-ion battery pack runs down. That motor spins out 295 lb.-ft. of torque, and the propulsion system lets it dig deeper (than Volt) into its battery voltage for stronger performance when you want it. Unlike Volt’s, its pleasingly athletic suspension is GM hi-per struts front and multi-link rear.

Its power button brings up a multifaceted display with a battery state-of-charge (SOC) curve and EV range on the left and a matching fuel-level curve and fuel range on the right. The four selectable drive modes are Tour (the default, for best efficiency), Sport (stronger torque, crisper steering and suspension settings), Mountain (saves some battery energy for long, steep grades) and Hold (saves charge for later usage).

Cadillac quotes electric-only range as 37 miles before the battery is depleted (depending on weather conditions and how and where you drive), plus another 303 miles after the engine starts to provide electric power to the drive motor for a total range of 340 miles. Then the driver can either stop and refill the gas tank or stop and recharge the battery.

At the start of our first ELR drive in Southern California, our test car’s projected EV range was 33 miles (at roughly 90 percent state of charge), and its fuel range 256 miles (total 289).

We cruised from Santa Monica 18 miles up the Pacific Coast Highway in Tour mode, then switched to Hold with 15 miles of EV range remaining, which imperceptibly fired up the engine to keep us going. A few miles beyond Malibu, we switched to Sport mode for a spirited charge up a twisty two-lane canyon road, then drove harder still along the spine of a mountain on Mulholland Highway and adjoining curvy roads, making good use of those innovative Regen on Demand paddles (instead of friction brakes) to slow for curves.

That left 177 miles worth of gas in the tank and a disappointing (but not surprising) 16.2 mpg indicated fuel economy on the A trip odometer. But our composite gas/electric economy (counting our earlier EV-only driving) was a more respectable 31.9 mpg.

Some weeks later, we borrowed another ELR for a week-long test in bitter-cold Michigan winter weather and drove it (in Tour mode) every day, plugging it in overnight to start each day with a full battery. While the range extender engine makes battery charging unnecessary when there is plenty of gas left in the tank, recharge times (empty to full) are about five hours with a 240V charger or from 12 to as much as 18 hours on 120V house current. We drove it a total of 142 miles at nearly 40 mpg composite fuel economy, and our last stop-and-go trip showed more than 45 mpg on the central display’s energy usage screen, and a lifetime fuel economy for that nearly new ELR of 52.7 mpg.

Our California run established the ELR as the best-looking, best-handling, smoothest-riding, most fun-to-drive electric-powered vehicle in our experience. Our later cold-winter week gave us time to learn to appreciate its informative customizable displays (Classic circular speedometer or Modern digital speed, with or without energy usage data) and even its controversial Cadillac CUE infotainment/navigation system. Our only major gripe was consistent cold feet due to its weak heating system in single-digit temperatures.

The Cadillac ELR is an expensive extended-range electric car with edgy styling, sporty driving dynamics, and an ability to run most of time on battery power without range-anxiety worries. Sales of the ELR are expected to be just 3,000 units, but the ELR is intended to boost the image of the Cadillac brand toward parity with BMW, Mercedes, and Audi.

Gary Witzenburg filed this NewCarTestDrive.com report after his test drives of ELRs in California and Michigan.