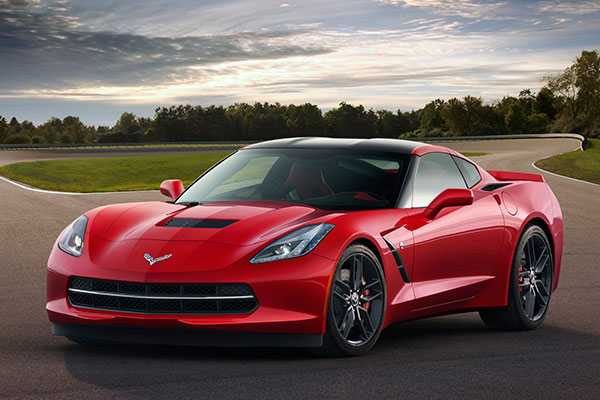 An all-new 2014 Chevrolet Corvette Stingray goes on sale this fall. The 2014 Stingray Coupe will start at $51,000, while the 2014 Stingray Convertible will retail for $56,000, according to Chevrolet. (All prices are Manufacturer's Suggested Retail Prices and do not include $995 destination charge.)

The 2014 Stingray Coupe was revealed at the January 2013 North American International Auto Show in Detroit. The upcoming Corvette shares only two parts with its predecessor. The change is so significant that it earns the designation of Stingray, a name GM execs say is reserved for the most revered Corvette models.

The 2014 Corvette Stingray will be the fastest 'Vette in history, with 455 horsepower and an estimated 0-60 mph time of less than 4 seconds, courtesy of an all-new 6.2-liter LT1 V8. Fuel-saving technology adds a sensible side to the Stingray, including direct injection, continuously variable valve timing and cylinder deactivation. A 7-speed manual with rev matching allows drivers to get the most out of their shifts without having to heel-toe.

Five drive modes from Eco to Track change the balance between economy and performance by tweaking twelve elements, including steering, suspension and throttle mapping. Like all of GM's performance cars, the Stingray was tested extensively on the track during the development. The result is a 50/50 weight balance and improvements in handling, including steering that's five times stiffer than the outgoing model. An optional Z51 Performance Package includes an electronic limited-slip differential, dry-sump oiling system, integral brake, differential and transmission cooling, as well as a unique aero package.

The radical design is clearly aimed at a global market, with taut, sleek lines that have been likened to those found on Ferraris and McLarens. It's longer, lower and wider than the outgoing model, with a fierce, hunkered-down stance. Designers say they used both the stingray (of the aquatic variety) and fighter jets as inspiration.

The Stingray hasn't completely abandoned its American heritage, however, as a few design cues still evoke pure muscle; most notably the squarish, Camaro-esque taillights, and a bold, center quad exhaust, with fluted shapes and shining metal that would put a symphonic horn section to shame. Not everyone gushes over the new design; criticism heard on the show floor following its debut ranged from “too European” to “overdone.” But nobody can say the new Corvette doesn't demand attention.

Entry-level Corvettes in the past have been notoriously skimpy on luxury, but a few upscale touches on the new Stingray help to quash that reputation. All models get a hood and removable roof panel made of pricey carbon fiber, which reduces weight and allows for a lower center of gravity. On the inside, the interior has been significantly improved with better finish and materials including aluminum trim (carbon fiber is optional), and standard dual, high-resolution information screens that are reconfigurable. Seats are built using an underlying structure of lightweight magnesium and come in two variants: A more comfort-oriented GT option and a Competition Sport setup with more supportive side bolstering.

The Stingray is expected to hit dealerships in Fall 2013. All 2014 Chevrolet Corvette Stingray models will be built in GM's plant in Bowling Green, Kentucky.