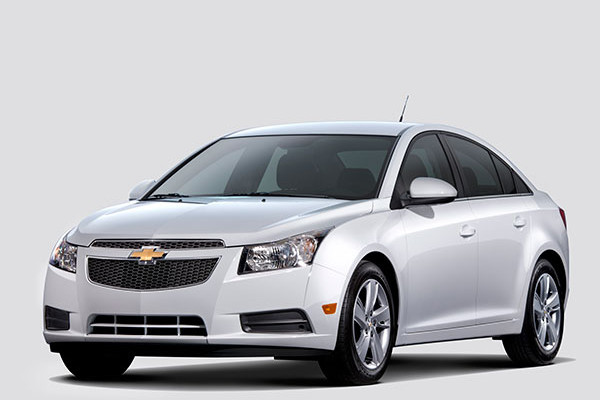 Chevrolet is the first American car company to bet on diesel in the U.S. with the debut of the Chevrolet Cruze Diesel at the Chicago Auto Show.

Classified as a compact car (but fitting size-wise between a compact and a midsize), the Cruze joins a small, exclusive club alongside Audi, Mazda and Volkswagen in offering smaller, diesel-powered cars for the North American market in the sub-$30,000 range.

Under the hood of the 2014 Chevrolet Cruze Diesel is a 2.0-liter turbo-diesel adapted from the version already used in European models. It makes 148 horsepower and 258 pound-feet of torque with an estimated 0-60 mph time of 8.6 seconds. Chevrolet eagerly points out that's more powerful than the Volkswagen Jetta TDI automatic, arguably the Cruze's closest competitor, with 115 hp and 125 lb-ft (although for the 2013 model, the Jetta starts at a few thousand dollars less). The standard transmission on the Cruze diesel will be a 6-speed automatic.

Fuel economy and reduced emissions are the goal of the diesel powered-Cruze. Chevrolet says the diesel version (which accounts for 40 percent of Cruze models sold in Europe) is expected to achieve 42 mpg highway and generates around 90 percent less Nitrogen Oxide (NOx) and particulate emissions compared to previous-generation diesels. The body style will carry over from the current Cruze, which launched as an all-new sedan for the 2011 model year.

Standard features on Cruze Diesel will include those not usually seen on compact base models, including leather upholstery, four-wheel antilock disc brakes and 17-inch alloy wheels. The Cruise Diesel will also use Chevrolet's MyLink infotainment system. Fuel economy will be enhanced by standard ultra-low-rolling resistance all-season tires, a rear spoiler and an Aero Performance Package.

The 2014 Chevrolet Cruze diesel will be built in Lordstown, Ohio, and is expected to hit dealerships in summer 2013. Prices will start at $25,695 including an $810 destination charge. A two-year maintenance plan, will be included, as well as a five-year/100,000 mile powertrain warranty.