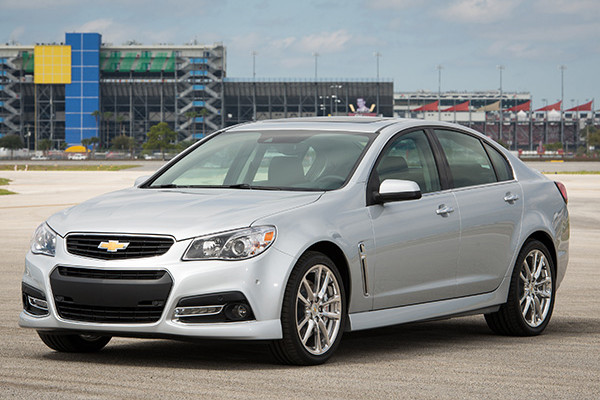 Fans of rear-wheel-drive compact sportscars will no doubt salivate over the all-new Chevrolet SS performance sedan, unveiled at the Daytona International Speedway as the pace car for the NASCAR season opener.

The four-door powerhouse is significant, because, as GM North America President Mark Reuss (and founder of Chevrolet's performance division) points out, it's been 17 years since the brand has built anything like it, despite the fact that sporty rear-wheel-drive vehicles were key in shaping Chevrolet's brand identity in earlier years.

Under the hood is Chevrolet's 6.2-liter V8 engine, the same one used in the outgoing Corvette. In the Chevrolet SS, it's expected to crank out 415 horsepower and 415 pound-feet of torque. Estimates put the 0-60 mph time at about five seconds. Purists will bemoan the lack of a manual transmission. A 6-speed automatic with paddle shifters will be the only option.

An aluminum hood, rear deck lid and engine block help to keep the car light. A MacPherson suspension up front and a multi-link setup in back aim to keep the Chevrolet SS firmly planted. Chevrolet claims a near 50/50 weight distribution, a claim all-too-often reserved for luxury sportscars like BMW. The Chevrolet SS will ride on 19-inch alloy wheels with Bridgestone summer tires and big Brembo brakes.

The Chevrolet SS will be built in Australia on GM's global Zeta platform, and is largely based on the Holden Commodore, which is built in the same assembly plant for the Australian market.

Size-wise, the Chevrolet SS is 195.5 inches long and 74.7 inches wide, slightly larger than the Malibu, and shorter (but wider) than current-generation Impala, the latter of which was the last model to feature a variant with an SS badge.

Front legroom in the new SS sedan is about on par with these models at 42 inches, while the SS slightly bests both the Malibu and the Impala in rear legroom at an ample 39 inches.