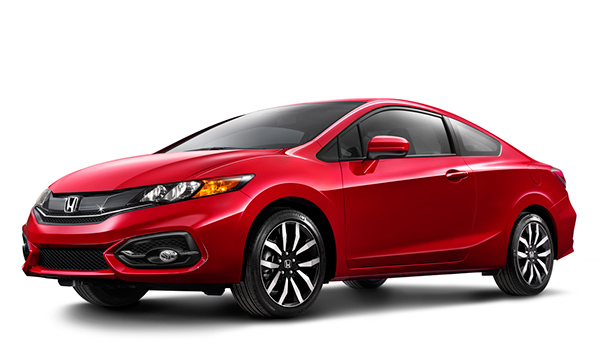 Enthusiasts caught their first glimpse of the 2014 Honda Civic Coupe, the two-door version of the brand's top-selling compact car, in Las Vegas at the 2013 SEMA Show. It comes nearly a year after Honda's quick refresh of the current-generation Civic sedan, which some say was pushed out hurriedly after the 2012 update flopped with much of the automotive press.

The 2014 Honda Civic Coupe gets a refreshed exterior. Many styling cues on the 2014 Civic Coupe are shared with the four-door sedan, while others are found exclusively on the two-door coupe.

Lines on the 2014 Civic Coupe are more angular and aggressive that the outgoing version, with a new front grille that sweeps across the nose into the redesigned wraparound headlights. Front foglight openings are larger and more imposing, and the lower front air intake forgoes the rounded corners for an angular, hourglass-like shape. From the side, character lines, rocker panels and fender arches are more pronounced, and silhouette is sleeker. Designs for the 17-inch wheels are also new. Taillight lenses and the rear bumper have also been redesigned.

The 2014 Civic Si Coupe is differentiated by unique front and rear air diffusers, redesigned 18-inch wheels and a decklid spoiler.

Powertrains are expected to carry over from the sedan, including a 1.8-liter four-cylinder that makes 140 horsepower and 128 pound-feet of torque. Transmission choices include a 5-speed manual or a 5-speed automatic. Civic Si models should get the sedan's 2.4-liter inline-4, with a retuned exhaust system that Honda says will boost power slightly over the sedan to 205 horsepower and 174 pound-feet of torque. As before, the Civic Si will be available only with a 6-speed manual transmission.

Pricing was not announced at SEMA, but we expect only a modest price increase over the 2013 Honda Civic Coupe, which starts at $17,965 MSRP.

Competitors include other sport compact coupes including Kia's redesigned Forte Koup, the Hyundai Elantra coupe and the Scion tC hatch.