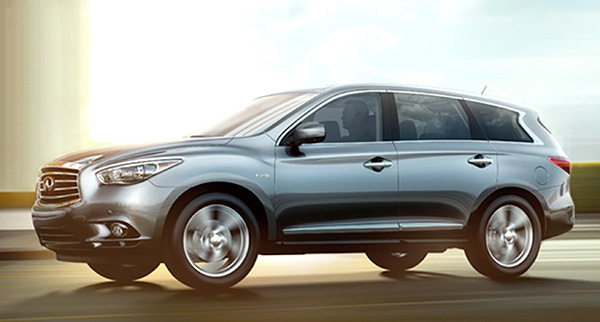 The second vehicle to debut with Infiniti's new Q naming scheme, the midsize crossover previously known as the JX made its first appearance in hybrid form March 2013 at the New York International Auto Show.

Keeping the same body style of the JX that launched for 2013, the rebadged seven-seater keeps Infiniti's swoopy signature styling cues like its double-arch front grille and double-wave hood. Headlights are standard HID xenons, and foglamps come on every model. Standard wheels are 18-inch alloys, with optional 20s.

Like the JX, the QX60 hybrid will be available in either front- or all-wheel-drive configurations.

Power for the 2014 Infiniti QX60 hybrid comes from a supercharged 2.5-liter four-cylinder paired with a 15 kW electric motor, the same used in Infiniti's M35h hybrid flagship sedan. Together, they're good for 250 net horsepower and 243 pound-feet of torque.

Official fuel economy estimates haven't been released, but Infiniti expects a driving range of about 500 miles on one tank of fuel, and an EPA Combined rating of 26 mpg. By comparison, the non-hybrid JX35 rates 24 mpg Combined with front-wheel-drive models, and 23 mpg Combined with all-wheel-drive.

Typically, the giant battery packs used in hybrid and electric vehicles sacrifice interior space compared to their non-electrified counterparts. In this case, Infiniti engineers managed to squeeze the lithium-ion battery pack under the third-row seat without affecting cargo or passenger capacity.

Options include a bevy of electronic systems such as remote start, a 360-degree camera with object detection, backup collision intervention (which will stop the vehicle automatically if someone or something crosses its path), lane departure warning and lane departure prevention, blind spot warning and intervention, full-speed radar-based cruise control (which can stop the vehicle if a collision is imminent), and intelligent brake assist with forward collision warning.

The Infiniti QX60 hybrid is slated to arrive in dealerships in late summer of 2013. For the 2014 model year, all JX models will switch to the new QX60 name. Official pricing hasn't been announced, but Infiniti says the hybrid will be priced at $3,000 above the traditional gasoline model. With the current JX35 starting at $41,250, that puts the QX60 hybrid in the neighborhood of $45,000.