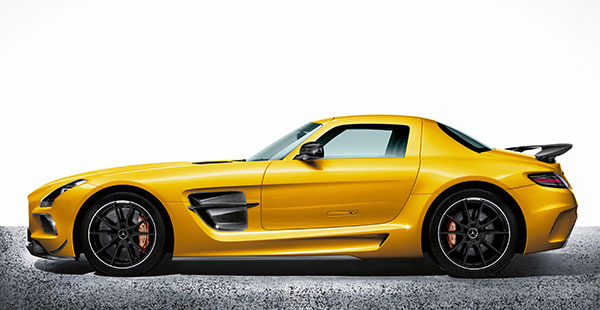 Introduced in the land of wretched excess at the 2012 LA Auto Show, the 2014 Mercedes-Benz SLS AMG Black Series is the fifth in the Black Series and the top of the road-ready five-car SLS lineup.

Borrowing bits and input from the GT3 racing SLS, the Black version gains performance in every parameter except top speed; nigh-on 200 mph was deemed enough. Carbon fiber is liberally applied to splitters, spoilers, wings, hood vents and diffusers all around so airflow keeps it planted on the ground. More carbon fiber where you can't see it, forged aluminum wheels, lithium-ion battery, carbon-ceramic brakes and a titanium exhaust system cut weight by more than 150 pounds.

SLS's rear-mounted 7-speed dual-clutch transmission and electronically controlled differential lock are tuned to match, and if you're very brave and equally skilled the stability control can be switched off.

Massive brakes larger than the wheels on some cars erase speed, aided by 19-inch front and 20-inch forged alloy wheels and sticky, sacrificial Michelin Pilot Sport Cup 2 tires you'll likely replace at every other oil change. Rather than the big wheel arch extensions of other Black models, the SLS is subtly formed to frame a nearly-inch-wider footprint, and the adjustable suspension and steering are calibrated for maximum handling and control.

The interior is decked out in black and red leathers, suedes and stitching, with plenty of carbon trim. A red band atop the steering wheel identifies straight up when you get sideways and behind on steering inputs.

Most of the controls will be familiar to Mercedes owners and even though it's essentially a street-able race car, blind spot warning, eight airbags and roadside (not trackside) assistance are standard.

Black Series upgrades typically add about 40 percent to the tab, so we expect this at or better than $300,000, though that's just a guess. Options will include an aerodynamics package, carbon fiber for the mirrors, engine cover and additional cabin trim, and a one-kilowatt Bang & Olufsen sound system so you can hear and feel audio over the manic engine.