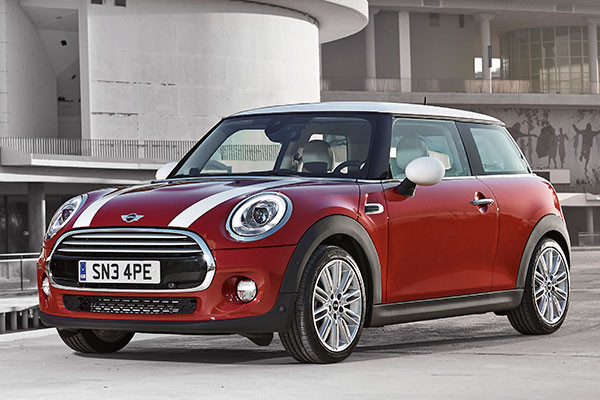 It’s a coming of age for the 2014 Mini Cooper. The original hardtop is all-new for 2014, bigger and more refined, while still retaining its classic looks and lively handling.

Now 4.5 inches longer and 1.7 inches wider, the 2014 Mini Cooper rides on a wheelbase that’s been stretched by more than an inch. Though the concept of a bigger Mini may be a contradiction in terms, the result is more interior room, increased cargo space and a more comfortable ride.

The Mini Cooper’s design is familiar, yet more mature. The wide-mouth, hexagonal grille remains, as does the circular headlights, though the latter are now fitted with optional LEDs.

Inside, circular shapes are echoed everywhere, from the air vents, speakers and door pulls to the gearshift surround. The speedometer, previously located in the center stack, has been moved in front of the driver. The circular area vacated by the former speedo now houses a display screen, controlled by a large iDrive-style knob and surrounding buttons located on the center console.

Powering the 2014 Mini Cooper hardtop is an all-new, 1.5-liter turbocharged, direct injection three-cylinder engine that makes 134 horsepower and 162 pound-feet of torque. The new inline-3 is the first example in the U.S. on a production car of BMW’s new modular engine, which is essentially a 3.0-liter inline-6 cut in half. The base Mini is efficient but not a track star; it goes from 0-60 mph in an estimated 7.4 seconds with the manual, and 7.3 second with the auto, according to Mini. It’s great for daily driving, but we found it lacks oomph off the line and in the low revs.

The more powerful Mini Cooper S uses a 2.0-liter four-cylinder engine good for 189 hp and 207 lb-ft. of torque (or as much as 221 lb.-ft with an overboost function). With the larger inline-4, the 2014 Mini Cooper S can dash from 0-60 mph in 6.5 seconds with the manual and 6.4 seconds with the automatic. We found this peppy setup great for darting through pokey traffic and for tackling winding mountain roads. It also passes on the freeway with ease.

Both models get two new transmissions: a 6-speed manual or a 6-speed automatic. On cars equipped with navigation, the automatic transmission uses GPS to identify the car’s location and map out possible drive routes, then adjusts shift points accordingly for better performance.

Suspension and steering have been revised, which helps to make ride and handling in the 2014 Mini Cooper more refined than in the past. Mini’s signature quick steering is still present, but doesn’t feel as darty. Nor does the suspension feel as teeth-chattering. As before, the chassis is stiff and responsive, with practically no body roll around corners.

Because it’s marketed as a premium car, the 2014 Mini Cooper is more expensive than other compacts, and options can add up quickly. Those looking for a small car with head-turning design might also consider the less expensive (but less powerful) Fiat 500 or the Hyundai Veloster. Alternatives to the Mini Cooper S include the Fiat 500 Abarth and Hyundai Veloster Turbo.

Safety features include dual-stage front impact airbags, front seat side-impact airbags, front and rear side curtain airbags, driver and passenger knee airbags, four-wheel disc brakes with antilock brakes (ABS), Electronic Brake Force Distribution and Brake Assist and stability control. All models with the manual transmission feature Hill Assist, which activates the brakes when starting on an uphill start to prevent the car from rolling back. Optional safety features include a rearview camera, head-up display, camera-based cruise control, distance control, and automatic collision mitigation (which will automatically hit the brakes if a pedestrian or another car are detected).

Although it's grown in size, the 2014 Mini Cooper hardtop is still instantly recognizable. Exterior design retains a three part shape, consisting of the body, roof and greenhouse (the daylight opening created by the windows), available in a wide array of contrasting color combinations.

From the side, the 2014 Mini Cooper has a higher beltline, keeping it in proportion with its new, inflated dimensions. The windshield is more sharply raked than before. Wheel arches are high and defined, and as before, the Cooper keeps its flat roofline. A variety of wheel sizes, styles and finishes are available.

In the rear, the hatch is framed by large, ovalish taillights. Base Cooper hardtops get a single tailpipe on one side, while Cooper S cars get twin center exhaust pipes. The Cooper S also gets a unique lower rear bumper and a roof spoiler.

Inside, circular shapes are echoed everywhere, from the air vents, speakers and door pulls to the gearshift surround. Interior materials look and feel upscale, and are well suited to the Mini's personality.

Of note, the speedometer, which has historically lived in the center stack, has been moved in front of the driver. This makes for much quicker reference while driving. The large, round binnacle vacated by the speedo now houses a large display screen. The car starts up with a flick of an analog-style switch in the center stack, and the ring surrounding the display screen glows red.

The MiniConnect infotainment system lets users pair Apple or Android smartphones for access to apps like Facebook, Pandora, Twitter and Rhapsody. MiniConnect shares commonalities with BMW's iDrive, and is set up similarly. A large knob and surrounding controls on the console lets users scroll and select functions. It's relatively easy to access most functions, but can be clunky when trying to change navigation settings or other preferences.

Seats in the Mini Cooper feel like they're built for those who are tall and lean, and those who do not fit this profile may not be completely comfortable. Petite drivers may find the seat cushions too long, with a lumbar support that hits in the wrong place. There's plenty of lateral support thanks to the Mini Cooper's aggressive side bolsters, but those without svelte frames may find them too confining.

Interior storage space is not abundant, and is best suited for short trips. Two cupholders on the center console hold average- to large-sizes bottles. A small tray to the fore of the gearshift holds a mobile phone. Side door pockets are narrow and will fit papers and small electronic devices, but not beverages.

Rear seating is slightly improved over the previous Mini Cooper hardtop, which was barely habitable for adults. Now, the 2014 Mini Cooper has nearly an inch more legroom than before. And because of its boxy roofline, there's still adequate headroom for most adults, though it's reduced slightly compared to the outgoing model. It's a cozy fit, but would be livable for short trips.

Cargo space is also improved from the last version, measuring 8.7 cubic feet, a compared with only 5.7 cubes in the old model. It's enough to fit a medium-sized suitcase. For more storage, the rear seats fold flat.

Because of its expansive windshield and relatively narrow A-pillar, outward visibility in the 2014 Mini Cooper is excellent. Side-view and rearview visibility is fine. The only potential issue stems from the fact that the Mini is still small, so, as with other small cars, one's view of the road ahead can be blocked by larger cars or SUVs.

As before, the 2014 Mini Cooper retains its sporting character, yet can be comfortable enough as a daily driver.

Mini Cooper and Mini Cooper S models are available with a choice of two transmissions: a 6-speed manual or a 6-speed automatic. On cars equipped with the automatic gearbox and navigation, the transmission uses GPS to identify the car's location and map out possible drive routes. It then adjusts shift points accordingly for better performance.

In the past we'd recommend the manual transmission hands-down over the automatic, as rowing through the gears can give the driver a greater sense of engagement. Now, BMW's automatics are getting so good, they're faster and more fuel-efficient than their stick-shift counterparts. For this reason, we'd opt for the automatic except for someone who loves a traditional manual.

We had to work the Mini Cooper's 1.5-liter inline-3 hard to eke out peak performance. With our manual transmission, we found ourselves wanting more out of third gear on winding, narrow roads in Puerto Rico. On straightaways, we could pull away from rusty old pickup trucks just fine, provided we didn't upshift too soon. We came away thinking the base model was best for city driving or the daily commute.

More power and torque makes the Mini Cooper S a truly fun car. Acceleration is peppier thanks to the 2.0-liter inline-4, and the automatic transmission provides enough oomph to merge and pass with ease. What's more, on cars equipped with navigation, the automatic transmission uses GPS to determine the car's location and maps out possible drive routes, adjusting shift points to maximize performance.

Ride and handling in the 2014 Mini Cooper is more refined than in the past. Adjustable driving modes include Mid, Sport and Green, which adjust throttle mapping, steering response and engine acoustics from conservative to aggressive (for added fun, Sport mode is displayed on the screen as a rocket ship icon next to a go-kart).

Mini's signature quick steering is still present, but the new setup doesn't feel as darty. The chassis is still stiff and responsive, with practically no body roll around corners. It's quick and agile, which came in handy many times while dodging stray dogs, chickens and islanders haphazardly crossing the road during our test drive. Variable ratio steering adjusts according to speed and driving style, requiring less effort in parking lots and tightening up around corners at faster speeds. The Mini's tight turning circle came in handy many times when pulling U-turns on narrow roads after missing poorly marked turns.

Suspension has been revised, and as a result, doesn't feel as teeth-chattering as before. Part of this is aided by the longer wheelbase, which absorbs the shock of the road a bit better. Still, after driving the base model with the sports suspension for a few hours of the many-rutted roads on the Isle of Enchantment, we felt like a well-played vibraphone. For 2014, optional dynamic damper control is available on both models for the first time, which should handle varied road conditions with a bit more panache. But even with the extra help, we'd guess the Mini Cooper's ride is definitely not cushy. But those used to the Mini's road manners will find the new model has a more refined feel.

Brakes handle stopping with ease, even when we mashed them on at the last second on newly wet roads to avoid a suddenly stopped gravel truck. Cooper S models have larger front brakes for even greater stopping power and more resistance to fade.

Our Mini Cooper S was equipped with automatic Stop/Start, which kills the engine and saves fuel when the car is at idle. As with BMW cars that use this system, the Mini's system kicks in quickly and starts up with an invasive shutter. Fortunately, pressing a button turns this feature off until the next time the car is started.

The 2014 Mini Cooper hardtop is reinvented with more space and better road manners, while retaining its classic looks and signature go-kart-style driving dynamics. Opt for the Mini Cooper S with the automatic for best performance, but be aware prices add up fast.