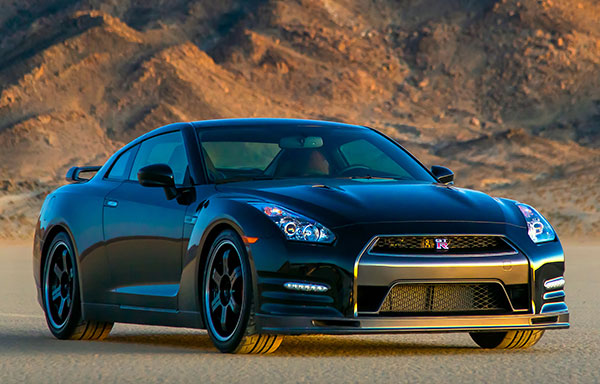 The Nissan GT-R is a supercar with a dedicated following, and no other car on the market can provide such a vast performance envelope for the price.

Nissan produced the Skyline GT-R between 1969 and 1974, and again in 1989 to 2002. As Nissan's leading performance vehicle, the car quickly garnered a reputation for speed and affordability. It became a regular on the motorsports scene and even earned the nickname Godzilla. In late 2007 Nissan dropped the Skyline badge and brought out the new all-wheel-drive GT-R to the Japanese market. In 2009 it was brought to American soil and has had subtle tweaks each year since.

Nissan GT-R boasts an incredible body of power, at 542 horsepower and 466 foot-pounds torque, an increase of 15 hp and 15 lb-ft over 2012. It has a 6-speed, twin-clutch sequential gearbox and a Launch Control system that is easy to use and supplies neck-bending efficiency.

The car is magnificent to drive. It is the perfect machine to take to the racetrack, and on your way home you can stop off at the grocery store to load up a week's worth of shopping with ample room to spare. It's an every day car with a bite large enough to outdo Jaws.

The cabin contains all the creature comforts one could need, such as climate control and a navigation system that responds via voice command. On the LCD there is a surfeit of data and virtual gauges available to inform the driver of every last detail of the car's dynamics.

The two door, 2+2 quasi-coupe is offered with just one powertrain, a twin-turbo 3.8-litre V6. Shifting is either automatic or by the steering column-mounted magnesium paddle shifters. The horsepower is increased from 530 to 542 and its impressive torque arrives over a broader range, delivered from 3200 rpm to 5800 rpm. The structure of the car and spring rates are stiffer and the shocks received newly designed bypass valves.

Visually, the Nissan GT-R appears unimaginative. It doesn't carry the elegance of a Ferrari or the ostentatious nature of a Lamborghini. It's functional and purposeful and its aggressive stance portrays a swagger and attitude of a machine that doesn't really care about its inferior looks. It was designed to do one thing and do it really well. And that is go blisteringly fast.

The fish-like front grille not only channels air to the intercooler and radiators but it is designed to increase front downforce and reduce lift. The lower grille opening provides a home for two side-mounted scoops to cool the enormous Brembo brakes. The polished black spoiler wraps around the chin of the car providing additional front downforce to help combat the cars inherent understeer. The hood has two functional scoops on top, in-between the narrow slick-back front headlights.

The front fender swoops back to the extractor vent just behind the front wheel with the GT-R symbol sitting atop a brushed silver badge overhead. The door handles are nicely integrated and a handy black button is directly adjacent, enabling you to open the door without removing the key from your pocket.

The polished black spoiler from the front continues around the side and behind the rear wheels. At the top of the door the car tightens up at the waist, housing the frameless door windows and fixed rear quarter windows as they taper back to a point. The 20-inch, six-spoke polished black wheels on our Black Edition test car covered the orange Brembo calipers on the 15.4-inch front and 15.0-inch rear floating rotors with diamond-pattern internal ventilation.

From the rear view the GT-R sports a mean appearance. It bears a monster quad exhaust system and four circular taillights, two on each side. The Black Edition we tested is topped with a dry carbon-fiber rear spoiler, on the Premium this would be body colored. At the bottom is a carbon-fiber composite diffuser tray finishing off what is, in my opinion, the best angle to view this car, and let's face it, the view most people will see as you blow them into the weeds at every stab of the gas pedal.

The GT-R interior is much like the exterior in which it doesn't live up to the standards set by some of the more prestigious and massively more expensive supercars on the market. That said, it is functional, practical and serves its purpose.

The driver's seat is nicely fitted with good grip coming from the side bolsters. The eight-way power adjustments provide good adjustability and finding a happy driver position was never an issue. The front passenger seat has ample legroom and an individual who is six-feet plus should still fit nicely. Headroom is also surprisingly adequate for a car of this nature and the view out of the rear window is decent, made better by the rear view camera to assist.

The rear seats provide zero legroom for a grown adult. But they fit child seats perfectly, with the LATCH system, and I was comfortable taking my wife, including two of our kids, for a spin. In fact, with children about 6 years and under, or any human with abnormally short legs, this car was actually very practical. This was rather shocking for a supercar, proving the versatility of the Nissan GT-R.

The trunk is large enough to store even my mother-in-law. I managed my mulch shopping from Lowe's in the GT-R too and it handled the everyday journeys as good as any large sports-sedan.

The trim in the cabin is certainly not luxurious but provides a level expected for a supercar at this price point. The carbon-fiber plate on the center console is a nice touch and buttons are easily accessible and intuitive to use. The steering wheel, wrapped in leather, looks dated and could use freshening.

The climate control was a little lacking in terms of its ability to maintain a comfortable temperature, with even the lowest fan setting still blowing quite a breeze and the only other option to turn the system off all together. To get around this I kept it on the lowest setting but would continually adjust the vents to prevent the air from blowing directly on me and then bring it back when I became too warm. It was as annoying as it sounds.

A horizontal bar beneath the control panel contains three settings for suspension, shift points and traction control. Just in front of the two-cup holders is a shiny red button, signifying the ability to bring Godzilla to life with a mere push.

Of the instrument clusters, the speedometer goes right the way up to 220 mph, reminding you, as if you need it, just how powerful the GT-R actually is.

The multi-layered information center on the LCD screen provides as much data as any driver can handle, from boost pressure, lateral and longitudinal G-Forces, throttle and brake position, steering position, lap times, coolant and oil temperature as well as graphs to show fuel economy and basically every other statistic you can dream up. The car even comes with a built in data system that is downloadable and viewable on your computer when you have taken the car to the racetrack and want to analyze your performance. The data are comparable to those used in professional race series across the world and the system is a major selling point for those who will be utilizing their GT-R on track.

It is here the Nissan GT-R comes into its own and outruns most supercars worth twice as much. The car clearly has cut corners in terms of looks and interior to keep its price tag reasonable but nothing has been spared when it comes to performance.

Nissan claims the GT-R can do the 0-60 sprint in just 2.7 seconds, quicker than just about anything other than the Bugatti Veyron. It has a top speed of 196 mph and no matter how much you drive the car, you never get used to the immense power available. Shifts from the column-mounted paddles are crisp and quick. Personally, I would prefer the paddles to be mounted to the steering wheel, as under hard cornering finding them can be troublesome and clumsy. Turn the transaxle to the Race setting and shifts sharpen and spread further up the engine's broad power curve.

There are three settings to chose from: Normal, Comfort or Race for the suspension, transmission shift points and the Vehicle Dynamic Control system's various algorithms. The suspension settings are noticeable with Race mode being a little too stiff for regular city driving. Turning it to Comfort takes a subtle edge off and provides a mildly more compliant ride, making longer journeys quite tolerable and keeping all your fillings firmly intact.

The car's traction control system is easy to use and almost too inviting every time you cross path with a stop sign. Simply put all three settings in to Race mode, press the brake pedal and mash the gas and the car hovers at roughly 4500 rpm. Release the brake and away you go with a slight squeal of the custom Dunlop, nitrogen filled tires. The distribution of power is balanced and utilizes the magnitude of grip available to its fullest capacity.

Take the car to the racetrack and challenge the car's dynamics and you sense the understeer, notorious with the GT-R. We did this at Mazda Raceway Laguna Seca. The 2013 GT-R is noticeably better than the 2012 model, but in slow corners the car is still set up cautiously. This is likely a smart idea by the Nissan engineers given the abundant drivers with less than spectacular driving skills.

With the power down, the rear can slide out from under you in a mere instance but is always controllable. In general, the stiffer springs and more rigid body construction of the 2013 GT-R yields a livelier handling machine. It feels more on its toes and precise like an agile NFL running back. Cornering grip is outstanding and the massive brakes are firm and fadeless as they bring the car's velocity down at a mesmerizing rate.

The GT-R works equally well as a cruiser on the highway, as we learned driving around Indianapolis. Switch to the comfort settings, slide the gearbox into sixth gear and listen to the twin-turbo whistle and you find yourself in what feels like a docile animal. The sound from the quad-exhausts is actually rather quiet. One expects an obnoxious, boy racer type growl from the enormous 3.8-liter V6 but instead you experience an almost too subtle rumble. It doesn't have the refined scream of a 458 Italia, or even the deep gurgle of the big V8 Shelby GT500. It exists somewhere in the middle, in a gray area that begs to be heard just a little more prominently.

The rattle of the gear changes is quite noticeable from the clutch in the transaxle and a decent amount of wind noise is present, but none of which are too distracting or intrusive.

Unsurprisingly, the fuel efficiency of the GT-R is not spectacular coming in with EPA estimates of 16/23 mpg City/Highway.

Since the Nissan GT-R's arrival on U.S. soil it has been known as one of the best supercars available for the price. Each year the car receives a slight makeover, constantly refining and improving the already impressive platform. Despite this, the car remains mostly without pedigree and prestige, and that's a shame because the Nissan GT-R is one of the most breathtaking cars you will ever drive. Whatever the reasons behind the lack of notoriety, the single fact remains. For roughly $100,000 you simply cannot buy a better supercar. Its deficiencies in looks and interior quality are more than made up for when you hammer your right foot down and lurch into an unimaginable world of glorious, unsurpassable speed. In a ratio of price versus performance, nothing else comes close.