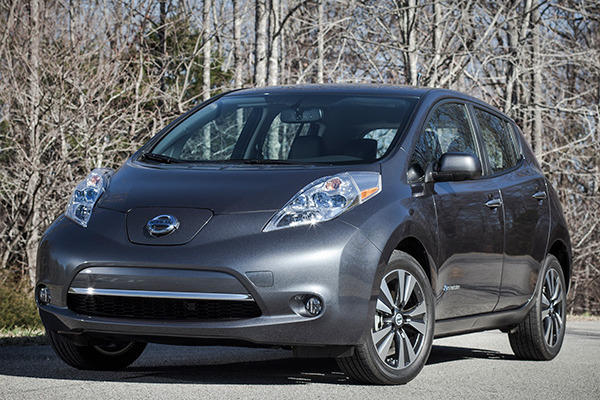 The Nissan Leaf is an all-electric, four-door compact car that seats five. When it debuted for the 2011 model year, it was the first mass-production all-electric vehicle to go on sale in the U.S., with a starting price of more than $30,000. With a number of newer electric cars nipping at the Leaf's heels, Nissan introduced a new “entry-level” base model for 2013 that started at just $28,800.

Little has changed for 2014, except for a newly standard RearView Monitor on all models. The EPA has modified the Leaf's equivalent-mpg ratings, and estimated a longer driving range than before. The Nissan Leaf is assembled at Nissan's plant in Smyrna, Tennessee, whereas 2011 and 2012 models were built in Japan.

By comparison, the 2012 Leaf was rated at 106/92 MPGe with an estimated range of 73 miles. Also, the EPA changed its methodologies in 2013 for determining EV range, so the Leaf's improvements are more significant than the numbers indicate. As with all electric vehicles, the actual range will vary based on driving style, speed, weather, temperature and battery age.

A 6.6-kW onboard charger is optional on the base model and standard on upper trim levels. With it, the 2014 Leaf can fully charge in about five hours using a 220-volt fast charger, versus about eight hours with the standard 3.6-kW charger in the S model. The available quick-charge port allows charging to 80 percent of capacity in about 30 minutes, at public stations using a CHAdeMO fast charger.

The Leaf is a zero-tailpipe-emissions vehicle. The tailpipe bit is important, since no vehicle is truly zero-emissions when production and distribution (and, in this case, charging) are taken into account. The Leaf uses partially recycled materials in the fabric upholstery found in the mid-level SV trim, made in part from recycled water bottles. It also uses a range of other wood and plastic materials, recycled and recyclable, in its interior and exterior design. Nissan claims the Leaf is the greenest production car ever built, and is about 94 percent recyclable.

Like other alternative-fuel vehicles, the Leaf qualifies for federal, and in some cases, state and/or local tax credits. The benefits of owning this type of vehicle may not all be measured in dollars and cents, however. Some states offer HOV (high-occupancy vehicle) stickers for electric and hybrid vehicles, which give access to coveted carpool lanes even when the driver is solo. For those who slog through stop-and-go traffic twice a day, this perk could bring welcome relief. Of course, it's wise to keep in mind that in crowded cities like Los Angeles, the congested special commute lanes don't move much faster.

Competitors were practically nonexistent when the Nissan Leaf debuted, but more automakers have stepped up with electric vehicle offerings. They include the Ford Focus EV, Mitsubishi i-MiEV, Honda Fit EV, Smart ForTwo EV, and Chevrolet Spark EV. Forthcoming electric models include an electric version of Mercedes-Benz's recently-introduced CLA. BMW also is offering a battery-powered ActiveE model. Those who have longer commutes or who suffer from range anxiety might also consider a plug-in hybrid such as the Chevrolet Volt, Toyota Prius Plug-in Hybrid, Honda Accord Plug-in, or the Ford C-Max Energi plug-in.

The 2014 Nissan Leaf comes in three versions: the Leaf S, as well as the Leaf SV and Leaf SL.

Leaf SL ($35,020) includes everything above plus leather upholstery, a cargo cover, HomeLink connectivity, automatic LED headlights, foglamps, a spoiler-mounted solar panel, and a quick-charge port. Options include the Premium Package, which bundles an upgraded Bose seven-speaker audio system, along with a 360-degree Around View monitor.

Because efficiency is crucial when it comes to EVs, design tends to be less by imagination and more by wind tunnel. Designers and engineers took great care to make the Leaf as aerodynamic as possible in order to achieve the least amount of drag, and subsequently, the maximum amount of range.

We think the Leaf is really cute, with a combination of Japanese Nissan and French Renault design ideas inside and out. It is not a small car, even though it looks small. EPA rates it bigger than 100 cubic feet inside, qualifying it as a compact car.

The underpinnings of the welded unibody chassis are mostly derived from Nissan's worldwide network of B-sized cars including the Nissan Versa, with struts up front and a torsion beam suspension at the rear: simple, cheap to build, and largely effective. Everything in the car operates electrically, from the A/C system to the power steering, and it all works very well as a package.

Leaf's electric charging-system terminal resides in a hatch in the nose. Those raised headlamp units that stand proud off the front fenders were designed to split the air into two paths, so that the two paths would go around the outside rearview mirrors as quietly as possible. A similar low-noise treatment was done to the antenna.

The big mouth on the bottom carries cooling air into the motor compartment and, interestingly, Nissan has made the underhood area look like a conventional four-cylinder engine and 12-volt battery. The slippery shape, which includes a completely flat bottom, generates a wind-tunnel coefficient of drag of only 0.29, among the best of all cars, because aerodynamic drag drains power and creates unwanted noise.

Inside, the Leaf is simple, clean and modern, with the instrumentation packaged in a beautiful blue-tinted array of center, left, and right modules.

The interior boasts more space than it might appear to have from the outside. Six-foot-tall drivers and passengers will have enough leg space and headroom, and the seats are comfortable and well-fitting. The tilt steering wheel is comfortable to use, but it unfortunately does not telescope. Plenty of light comes into the car thanks to the large windows and narrow pillars, which also aids visibility.

Cargo space in the Nissan Leaf measures 24 cubic feet with the rear seats in place, or 30 total cubes with the 60/40-split rear seats folded flat.

Special instruments include a large speedometer, battery temperature, power meter, remaining energy, capacity level, distance-to-empty, and an ECO mode indicator. The palm-sized floor shifter offers Park, Reverse, Neutral, Drive, and one more notch to the rear, Eco mode, which changes how the throttle and brakes work to give the best possible mileage performance from the battery. The Leaf navigation system is programmed to show all available public charging stations as well as a continuously updated circle of driving range overlaid on the nav map. There is a separate screen for charging timer to take advantage of low electricity rates at night, and a climate control timer screen.

On SV and SL trims, the Leaf includes a system called Carwings, a smartphone application that can check state of charge, charging status, a start-charging command, and a remote switch to start the heating or cooling system. It can also tell the driver if the charger has been inadvertently or deliberately disconnected.

The Leaf is fun to drive because it's so very different from driving a traditional, gas-powered car. Like all electric cars, the 2014 Nissan Leaf is extremely quiet. So quiet, in fact, that Nissan worked with a number of groups to design and build a noise generator that operates between 1 mph and 18 mph, to warn visually impaired pedestrians that a car is nearby. At speeds over 18 mph, the car is loud enough on its own to be heard. Other manufacturers have developed similar systems, triggered by concerns expressed by blind activists.

The electric motor provides tons of silent torque to get away from stoplights, and still has plenty of power for 40-70 mph passing maneuvers. In fact, it could go faster than 90 mph on level roads. If your goal is hyper-miling, getting the absolute most out of each battery charge, the instruments will help you all the way. That assistance includes one at the top left that first completes a circle, and then grows virtual trees as you drive.

The weight of the batteries can be felt on winding roads. Transient response, how the car behaves in hard left-right-left emergency lane-change maneuvers, is not nearly as good as that of the Chevrolet Volt. Leaf is front-wheel drive.

The operating guts of the Nissan Leaf consist of a 600-pound, laminated lithium-ion battery pack made up from a series of four cells to a module, with 48 modules, for a total of 192 batteries. The battery pack is made for Nissan by its battery partner, NEC of Japan. It uses a combination of lithium-ion, manganese and graphite to feed an 80-kilowatt electric motor, which produces a modest but adequate 107 horsepower, and a peppy 207 pound-feet of torque.

Leaf gets an EPA-rated energy efficiency equivalent (MPGe) of 130/102 mpg city/highway rating and an estimated range of 75 miles.

With improved range, efficiency and pricing, compared to initial models, the 2014 Nissan Leaf is a solid choice for commuters who are willing and able to recharge an electric car at home.