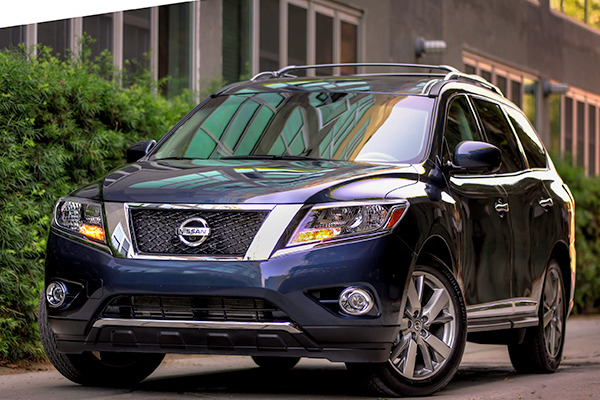 A fixture in Nissan's product lineup for more than 25 years, the fourth-generation Pathfinder has evolved from the cheeky adolescent Hardbody of 1986 to the mature parental unit of 2013-14. It's a maturation process that entailed several zigs and zags. Like so many vehicles that came along in the mid-'80s SUV boom, that first generation was a body-on-frame design based on Nissan's compact pickup truck. The next iteration (1996) was a unibody (frame rails integrated with the body shell), but Nissan reverted to body-on-frame for generation three (2005).

As a result, the transition to the 2013 Nissan Pathfinder, redesigned as generation four, was a major course change for this persistently popular SUV. The third generation was conceived for the possibility, however remote, of serious off-road use; hence, lots of ground clearance and body-on-frame construction.

Biggest news for 2014, though, is the introduction of a Pathfinder Hybrid model, offered with either two-wheel or all-wheel drive. In the Hybrid, a supercharged 2.5-liter four-cylinder gasoline engine mates with a 15-kW electric motor and a compact lithium-ion battery. The battery fits under the third-row seat, which means no compromise in passenger seating or cargo space.

The new 2014 Pathfinder Hybrid uses a Nissan Intelligent Dual Clutch System. With combined output of 250 horsepower and 243 pound-feet of torque, performance is claimed to be equivalent to the non-hybrid Pathfinder's 3.5-liter V6. The Hybrid comes in SV, SL or Platinum trim, whereas regular Pathfinders are offered in four trim levels.

How did the current-generation Pathfinder increase dimensions while reducing weight? That, plus much higher chassis rigidity, is a benefit of unibody construction. At 114.2 inches, the current Pathfinder's wheelbase is 2.0 inches longer than the 2012 model. Overall length stretched 4.6 inches, and width expanded from 72.8 to 77.2. The only dimension that shrunk was height, partly because ride height and ground clearance (6.5 inches) are similar to sedan figures.

This isn't surprising, since the latest Pathfinder's architecture, based on front-wheel drive, is shared with the Nissan Altima sedan. What does surprise is how much mass was pared from the Pathfinder in the transition from generation three to generation four: 300 to 500 pounds, depending on model.

Although Nissan created no fancy name for it, the design and engineering approach to the weight reduction is similar to Mazda's Skyactiv Technology. Everything in the new Pathfinder went on a diet.

The sum of the foregoing, plus improved aerodynamics (0.34 coefficient of drag, very good by SUV standards), is EPA fuel-economy estimates of 20 mpg City, 26 Highway for front-wheel drive models; or 19/25 mpg with all-wheel drive. Nissan has claimed best-in-class status for the front-drive Highway rating. In contrast, the prior Pathfinder rated only15/22 mpg with rear drive, 13/18 with four-wheel drive.

For the Platinum edition, the Premium Package ($2,300) includes DVD entertainment with dual 7-inch screens, as well as the dual Panorama moonroof, sunshade, and rear roof glass with power sunshade.

The 2014 Nissan Pathfinder's dimensions certainly expanded compared to its predecessor, but it's hard to see at a glance, thanks to smooth styling that's a little more streamlined and a little less utilitarian than the previous generation. The modest fender flares and wide stance suggest muscle, which is an overstatement. On the other hand, the Pathfinder body has been carefully sculpted for aerodynamics (as noted, 0.34 Cd), as well as suppression of wind noise. Use of front and rear spoilers, as well as rear tire deflectors and rear-suspension fairings, helps achieve that level of slipperiness through the air.

Thin A- and D-pillars, plus a low beltline, give the cabin an airy feeling, and the wide chrome grille is unmistakably Nissan. Except for chrome door handles and a couple of horizontal trim strips, brightwork is modest. The optional dual panorama moonroof (power retractable front portion, fixed rear) adds to the wide-open feel of the interior, and there's a power sunshade for the rear portion if/when the sun gets a little intense.

As you'd expect, expanded dimensions pay off in expansive interior volume. Nissan claims best-in-class passenger volume, but probably the biggest beneficiary is the middle row, which offers more leg and elbow room, as well as 5.5 inches of fore/aft adjustability. Nissan also worked to make third-row access easier, including times when child seats may be occupying the middle row. Flip the seatback forward, child seat and all, and there's plenty of room to climb into the rearmost seats.

Easy access doesn't make that third row much more habitable, though. Like most, it's pretty snug, especially for adult-size people, though reclinable seatbacks help some what.

Like all SUVs, the Pathfinder's second- and third-row seats fold flat to expand cargo volume, to almost 80 cubic feet. There's 16 cubic feet behind the third row seatbacks, with a small storage well beneath the floor.

The relaxed-fit front seats are comfortable, with only modest lateral support, though this isn't likely to matter since no one will confuse this vehicle with a sports car. Besides, lower bolsters make getting in and out easier. The front seats are available with both heating and cooling functions, and there's heating for the middle row. Leather is available in upper trim levels, though the basic model's seats are clad in a high-grade cloth.

With pricing that can cross the $40,000 threshold, the Pathfinder's available inventory includes a broad array of features: an excellent 13-speaker Bose audio, 8-inch center-dash color display screen, the Panorama moonroof, a user-friendly navigation system with real-time traffic info, and Nissan's Around View security camera prominent among them. Unfortunately, all of them are optional: Standard features are relatively minimalistic, particularly in the lower trim levels, S and SV.

Around View, as noted, costs extra. The system involves four cameras that monitor what's happening in a 360-degree arc around the vehicle. Shared with the Infiniti JX (renamed QX60 for 2014), Nissan has characterized this as an industry first, although both Lexus and Range Rover offer similar systems. But it's definitely a first for this segment, and is likely to save the lives of a good many small dogs, cats, Big Wheels, and Cozy Coupes. Conspicuous by its absence is the Infiniti JX model's assist system, which alerts the driver to cross traffic or pedestrians during back-up maneuvers.

Beyond content issues, the Pathfinder's attractively furnished cabin has an open feel, as noted earlier, even without the big sunroof, thanks to the low beltline. The slender front and rear roof pillars contribute to good driver sightlines, particularly looking forward. Furthermore, the center stack includes an intelligent mix of buttons and knobs, in contrast to the all-digital touch controls becoming popular elsewhere.

The 2014 Pathfinder's 3.5-liter V6 doesn't have the thrust of the 4.0-liter six that powered the third generation, particularly in the torque department; but with its reduced mass, the power-to-weight ratios work out about the same. So does acceleration from a standing start: expect 60 mph to come up in about 7.5 seconds. There's also enough thrust to make two-lane highway passing a reasonable exercise, even with family occupying all the seats.

On the other hand, while throttle response is prompt, putting the pedal to the metal doesn't always produce maximum haste. Blame the CVT for this. Nissan has done more with CVT development than any other carmaker, to exploit the virtues of this transmission type in terms of fuel economy. But big throttle demands will still provoke a bit of the asthmatic wheezing that's been a CVT characteristic, as well as the sense of slipping clutch as the transmission's belt mechanism catches up to the engine.

Some drivers are bothered by this sensation, deeming lack of actual gearchanges to be unnatural. Others are unfazed, and may even grow to appreciate the non-traditional feel of a CVT.

All but the most ardent CVT naysayers may have trouble finding fault with the performance of Nissan's new Pathfinder Hybrid. So might those who aren't ordinarily hybrid fans. In addition to accelerating with a delicious level of smoothness, the battery/gasoline version of the Pathfinder exhibits virtually none of the straining or over-revving sensation that's plagued many CVTs (hybrid and otherwise), particularly in the past.

Engine noise is carefully subdued, and the Pathfinder Hybrid's supercharged four-cylinder responds to the gas pedal with considerably more spirit than most drivers are likely to expect. Better yet, that energetic response arrives in a neatly linear fashion, enhancing the sense of smoothness.

Overall, the 2014 Nissan Pathfinder Hybrid comes across as one of the most satisfying examples on the market of this type of powertrain, extracting no penalty in either pleasure or highway capability as a tradeoff for its frugal fuel usage. For city driving, in particular, the EPA figures tell an enticing story: an estimated 25 mpg for a seven-passenger SUV. Except for the Altima Hybrid sedan that disappeared after 2011, Nissan hasn't been a big player in battery/gasoline powertrains; but it hits the hybrid mark with this Pathfinder.

One caution must be stated, however. As with other hybrids, under certain conditions, including cold weather, the gasoline engine does not shut off when the vehicle comes to a stop. So, gas mileage during those periods will be significantly less thrifty than the EPA estimates suggest.

Steering, on all Pathfinder models, falls short of some drivers' expectations. Like most carmakers, Nissan has adopted an electric power steering system, as a fuel economy measure. Also like most, the system varies power assist as a function of speed: the higher the speed, the lower the assist. However, in the Pathfinder, the system is basically numb, providing almost no tactile information to the driver. As a consequence, the driver may wind up making tiny adjustments during cornering maneuvers, matching intention to the vehicle's actual response. A relatively slow steering ratio, 3.3 turns lock to lock, doesn't do much to enhance the experience.

Still, even if the Pathfinder's dynamic persona is deemed all but devoid of fun, it has other virtues. The suspension tuning, for example, strikes an excellent balance between ride comfort and limited body roll in hard cornering. There's enough compliance to smooth out nasty patches and freeway expansion joints, with enough roll stiffness to provide decisive responses in situations requiring quick maneuvers.

Braking is a strong suit, with excellent pedal feel that makes it easy for the driver to modulate pressure.

With a long wheelbase and modest ground clearance, the latest Pathfinder isn't designed for tough off-road use. The simplified four-wheel-drive system provides three settings: front-drive, automatic (sending power to the rear wheels when the fronts begin to slip), and four-wheel lock, which fixes front/rear torque split at 50/50. It should serve well in wet, slushy, and icy road conditions, but it's not on the same page as its predecessor for serious off-roading.

Let's not forget towing. Nissan is proud of the Pathfinder's capability; 5000 pounds is high for a vehicle with front-wheel-drive architecture (Nissan claims best in class), and a noteworthy achievement for a CVT vehicle. It would resonate even better if the previous Pathfinder hadn't been capable of dragging 7000 pounds.

Still, assessed as an all-purpose family hauler, the Pathfinder's dynamics grade out quite well. The overall priority may be smooth ride and quiet comfort, but not at the expense of competence.

The latest Pathfinder might provide a vanilla driving experience, and it's no longer a good choice for anyone who wants to take on rough off-road treks. However, it's roomy, comfortable, quiet, and attractive. Devoid of dynamic vices, it offers the kind of family peacekeeping entertainment features that make long trips tolerable for all hands, and can be optioned up to luxury levels. Add fuel economy that's as good as anything in this class, and better than most (more so with the Hybrid), and the 2014 Nissan Pathfinder rates as an attractive entry in a very competitive field.