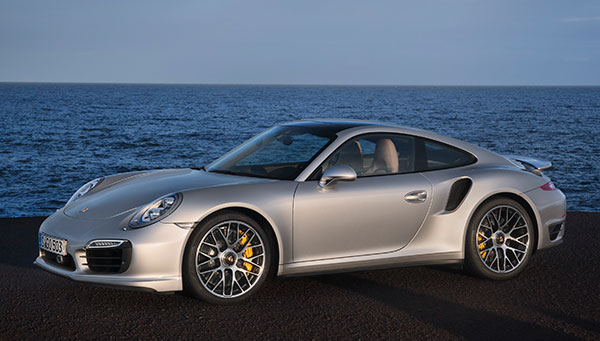 Three new versions are arriving for 2014: Porsche 911 Turbo and Turbo S Cabriolets, along with a redesigned, track-ready GT3 coupe.

The Porsche 911 GT3 enters its fifth generation with a new engine, transmission, chassis and body. In addition to a broad profile and rear wing, the GT3 has a new option: full-LED headlights. Active rear-wheel steering is new, and the 3.8-liter flat-six engine generates 475 horsepower. That’s sufficient for 0-60 mph acceleration in an eye-popping 3.3 seconds, according to Porsche.

Porsche also is offering a 50th Anniversary Edition, based on the 911 Carrera S. New 911 options for 2014 include LED headlights and Turbo wheels.

The redesigned Turbo and Turbo S coupes arrived late in 2013, replacing the previous-generation versions that had been sold during 2013. In addition to being all-new, Turbo coupes and Cabriolets gain active rear-wheel steering and adaptive aerodynamics, as well as a power boost. The 3.8-liter Turbo engine generates 520 horsepower, while the Turbo S promises 560 hp.

The 2014 Porsche 911 Carrera is available in coupe and Cabriolet forms. It comes in two states of tune: 350-horsepower Carrera and 400-horsepower Carrera S. The 2014 Porsche 911 Carrera 4, Carrera 4S, Carrera 4 Cabriolet, and Carrera 4S Cabriolet bring all-wheel drive into the equation. That’s a lot of models, each one a fantastic sports car. You can’t buy a bad 911, though having to choose among them could be stressful, the kind of stress you want to have.

The current 991 is longer, lower and wider than the 997 before it, but the familiar profile remains. Also familiar is its rear-engine layout, featuring a horizontally opposed six-cylinder engine tuned with the latest engineering and technology yet emitting the traditional Porsche wail.

The Porsche 911 Carrera is powered by a 3.4-liter flat-six punching out 350 horsepower and 287 pound-feet of torque, with a 0-to-60 mph acceleration time of 4.4 seconds, according to Porsche. The Carrera S goes with a 3.8-liter flat-six making 400 hp and 325 lb.-ft. of torque, with a 4.1-second 0-60 time. Both engines are available with a 7-speed manual or 7-speed dual-clutch transmission, which Porsche dubs PDK (for Doppelkupplung).

Cabriolets feature an automatic soft top that can be raised or lowered in just 13 seconds, at speeds of up to 31 mph. Every Carrera variant is available as a Cabriolet.

One notable difference between this 991 generation and the prior 997 is the steering. Porsche switched from a hydraulic system to electric steering, a move that created a stir among enthusiasts. While some experts call the new steering numb, we found, unlike many of the new electric power steering systems, the electro-hydraulic system on the Porsche 911 continues to let you know precisely what the car is doing.

Another improvement was the addition of the Porsche Dynamic Chassis Control (PDCC) active roll stabilization system. Porsche claims its PDCC technology enhances cornering performance by keeping the tires in their optimal position at all times, while minimizing body roll.

Each 2014 Porsche 911 is a markedly refined machine. The interior has the lavish appointments you’d expect in a high-line sedan, with such niceties as an 18-way power driver’s seat. That’ll keep you firmly in place during the hardest cornering, but it’s also comfortable enough to be an everyday driver.

Competitors include sports cars that can handle track days and the daily commute, such as the Aston Martin V8 Vantage or Mercedes-Benz SL-Class.

The 2014 Porsche 911 is available in Carrera and Carrera S versions. Each comes in coupe and Cabriolet versions, which feature a power-folding soft top, with a choice of rear- or all-wheel drive. There is a choice of engines and transmissions.

The seventh-generation model certainly looks like a Porsche 911, but it's seen many changes from pre-2012 models. Compared to the previous generation, the 991 version rides on a wheelbase stretched four inches, and an overall length increased by two. Those differences tell you that overhangs are tighter. The roof is lower, track is wider, and the wheels are larger in diameter.

The Porsche 911's headlamps have a bit more of a three-dimensional look than in the past, in keeping with a body that is more sculpted than before. The sheet metal has a more precise and taut feel, with a cabin that moved ever so slightly forward. Overall appearance is more dynamic: refined, yet aggressive.

Most models, even the base 911 Carrera, have an active wing that pops up to add downforce in high-speed turns. It's part of a handling package that can include the Porsche Dynamic Chassis Control (PDCC) active roll stabilization system.

The newest 911 may be bigger, but it shed a surprising amount of weight, thanks to the increased use of aluminum and other lightweight materials. Curb weight totals 3,086 pounds with the PDK (double-clutch) gearbox, about 100 pounds less than the old model. That's no mean feat, considering all the other new technologies stuffed inside.

Sports cars have traditionally put their emphasis on what's under the hood, not in the cabin, but recent generations of the Porsche 911 have focused more attention on the interior. This latest generation is no exception. It delivers a level of refinement you'd expect from a luxury sedan in a similar price range.

Comfortable 14-way power sports seats are enveloping, and able to keep you in place even during the harshest cornering maneuvers. And unlike some, you can climb in and out with relative ease. Although the 911 employs a classic 2+2 configuration, the back seats are best suited to small children and light packages.

The overall appearance of the interior is one of Teutonic efficiency. Detailing is handsome and elegant, but avoids the sort of gold-chain bling you expect from Ferrari and Lamborghini. Ergonomics are improved in this generation, with well-placed controls and easy-to-read gauges, a larger LCD navigation screen, and a center console inspired by the four-door Panamera, which places key vehicle functions within easy reach. Fortunately, though, the one found in the 911 is smaller and less overloaded with toggles and switches.

The five-circle instrument cluster is well laid out. One of these is a multi-function display that offers a range of programmable information, including the most immediate navigation instructions or an active g-force meter that instantly shows how hard you're accelerating, braking or turning. At one point during a run down the test track, the 911 nudged an astounding 1.3 g.

Porsche 911 Carrera models offer a choice of 7-speed manual gearbox or 7-speed PDK (short for Porsche Doppelkupplungsgetriebe), a dual-clutch automatic. While the manual gearbox is clearly going to be near and dear to the hearts of those of us who feel there must be three pedals on the floor of a true sports car, we wouldn't be surprised to see the PDK start to raise doubts among those even slightly less committed.

The double-clutch PDK is just a wee bit faster than a well-shifted manual. Some say it's just as much fun to operate when using the steering wheel-mounted paddle shifters, which pair especially well with the optional sport wheel. The PDK also gets slightly better gas mileage than its manual counterpart.

The 911 has always been quick, even in base form. And with the Carrera S now rivaling the acceleration of the old GT3, it will sink you even deeper into the sport driver's seat when you use Launch Control. Available only with the PDK, Launch Control is designed to minimize wheel spin and maximize torque for the fastest off-the-line acceleration. Press the button, hold down the brake, press the throttle to the floor, wait until it tells you to go, and release the brake. When we did this, we noticed the way our peripheral vision seemed to vanish as our eyes focused on the barrier at the end of a temporary track Porsche set up for testing at California's Santa Maria Airport. We hit 112 mph before slamming on the oversized brakes, which quickly brought us to a halt well before the looming barrier. Then we zigged and zagged through a serpentine course that included decreasing radius corners and a tight slalom stretch.

Straight-line performance is impressive, but what's really wonderful is how the Carrera S effortlessly maneuvers through demanding corners. The latest 911 posted a 7:40 lap time around the challenging Nurburgring Nordscliefe, an old, classic circuit now used as a benchmark by luxury performance carmakers. That's a whopping 16 seconds faster than the previous, sixth-generation Porsche 911.

At the same time, we were impressed with how quiet and smooth the Porsche 911 is on regular roads.

Some drivers feel the electric-assisted steering offers less feel and is numb compared with the old hydraulic system, but we think that may be overstating the case. Yes, it's smoother and less likely to transmit the raw sensation of hitting every twig and pebble on the road. But unlike all too many of the new electric power steering systems that makers are rapidly migrating to, the electro-hydraulic system on the Porsche 911 continues to keep you in close touch with the road. One does have to get used to what the car is telling you, however, especially due to the much more limited amount of body roll allowed by the Dynamic Chassis Control system. But it only took a few minutes, and a couple of hard turns, to feel confident, comfortable and in touch with what the latest 911 was doing. That's also what's impressive about this car: how quickly the driver becomes comfortable and confident at speed.

This latest-generation Porsche 911 does everything better than the pre-2012 models. You might find something faster for the price, but it's difficult to find anything that comes close to the pure driving pleasure of this classic sports car. Any Carrera would make fine daily transportation.

Paul Eisenstein filed this report after his test drive of the 911 Carrera S in Southern California. With Laura Burstein reporting from Los Angeles and Mitch McCullough reporting from New York.