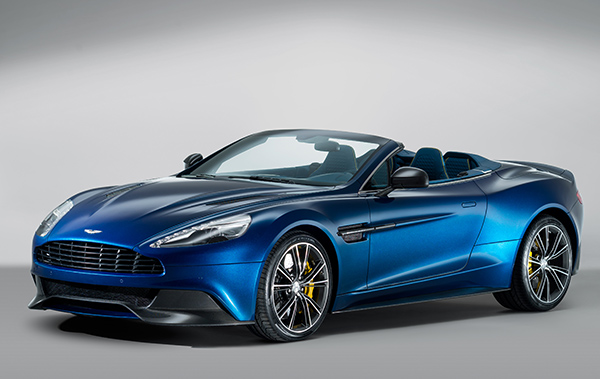 The Aston Martin Vanquish Volante, the drop-top companion to the Vanquish Coupe made its North American debut in Monterey, California, during the festivities preceding the August 2013 Pebble Beach Concours d'Elegance.

With the same stunning good looks as the fixed-roof Vanquish, the two-door, 2+2 Volante is powered by the same AM11 V12 engine, good for 565 horsepower and 457 pound-feet of torque. It's mated to a 6-speed Touchtronic 2 sequential manual gearbox, with steering-wheel-mounted paddle shifters. A limited-slip differential is standard. While it's not the quickest Aston in the lineup, it nonetheless posts an impressive 0-60 mph time of 4.1 seconds and a top speed of 183 mph.

Underneath its carbon fiber body, the Vanquish Volante rides on a chassis of bonded aluminum and carbon fiber that's 14 percent stiffer and 10 percent lighter than Aston Martin DBS Volante. Although the Volante is lighter, it's not svelte with a curb weight of 4,065 pounds. A new rear subframe helps redistribute weight more evenly, for a 51/49 front-rear balance.