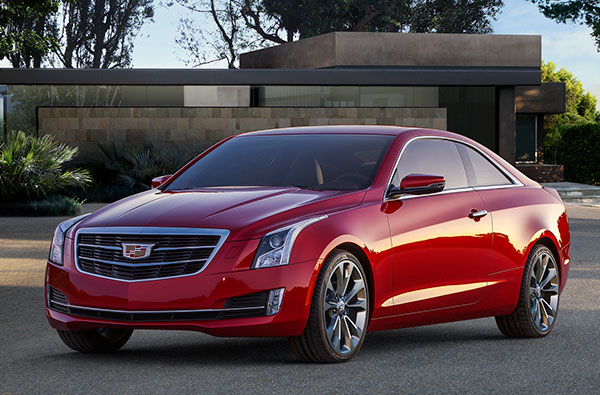 A two-door version of the Cadillac ATS comes two years after the debut of the award-winning four-door compact luxury sedan. Revealed at January's North American International Auto Show in Detroit, the 2015 Cadillac ATS Coupe goes on sale this summer and is poised to compete with the new BMW 4 Series.

The two-door ATS Coupe rides on the same platform as the four-door sedan and shares the same 109.3-inch wheelbase. The coupe differentiates itself with its own front fascia, roof, doors, rear fenders and trunk lid. The Coupe also has a wider track and rides on unique 18-inch wheels.

Powering the 2015 Cadillac ATS coupe will be an updated version of the sedan's 2.0-liter turbocharged engine, which makes 272 horsepower and 295 pound-feet of torque. Cadillac estimates a 0-60 mph time of 5.6 seconds, good for the class. Gearbox choices include a 6-speed manual or a 6-speed automatic.

Or, buyers can opt for a line-topping 3.6-liter V6 that pumps out 321 hp and 275 lb.-ft. of torque. The V6 comes only with the automatic transmission.

Both variants are available with rear-wheel drive or all-wheel-drive.

Contributing to the ATS Coupe's handling and performance is a multi-link MacPherson front suspension and five-link independent rear suspension. Front brakes are made by Brembo, and, like BMW, the ATS offers near-50/50 weight distribution. An adjustable suspension with magnetic ride control is optional, as is a mechanical limited-slip rear differential.

Like the ATS sedan, the ATS Coupe has a beautifully executed cabin, with tasteful materials and finishes, which rival, if not exceed, those found in the BMW 4 Series. A Bose premium audio system is standard on all models.

An updated version of Cadillac's CUE infotainment system with its 8-inch touch screen comes standard on upper trim levels and is optional on the base. Updates include a new text-to-voice feature that will read SMS messages from users' smartphones, and 4G LTE connectivity that allows driver and passengers use the ATS Coupe as a WiFi hotspot for up to seven devices.

Safety options include those found on other Cadillac models, including forward collision alert, adaptive cruise control, head-up display, lane departure warning, park assist and rearview camera. Also available is Cadillac's new lane keeping assist, which will steer the car back into its lane if the driver veers.

Expected availability for the 2015 Cadillac ATS Coupe is Summer 2014. No official word yet on pricing, but we expect a premium over the ATS sedan, which starts at $33,065. Our best guess is around the $36,000 mark, which undercuts the BMW 4 Series, and gives drivers more for the money over BMW's forthcoming small 2 Series coupe.