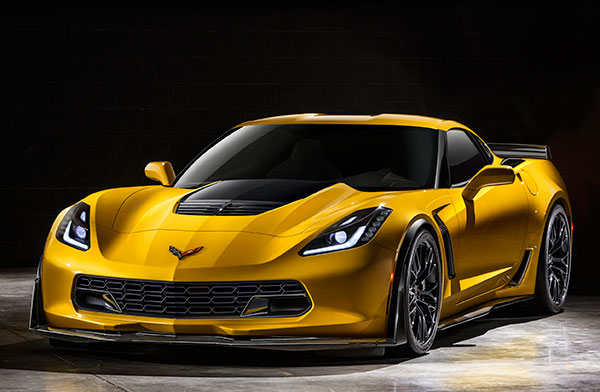 Fresh from winning the 2014 North American Car of the Year award, Chevrolet plans to add even more pace to its star-spangled sports car with a new edition of the Corvette Z06.

Fourth in a series dating to 1963, the Z06 is a higher-performance version of the Corvette, aimed at delivering maximum performance in autocross events and track day workouts.

It has always been a hard-edged Corvette variant, and in its next iteration, due to reach showrooms late this year as a 2015 model, it will be the most capable Corvette ever, according to GM.

The development team had a head start with the 2015 Corvette Z06 program, because the aluminum foundations that contributed to the standard Stingray's North American Car of the Year honors required almost no revisions for the Z06, according to GM.

Stiffer by some 60 percent than the previous Corvette, those underpinnings are also being used in the CR7 Stingray race car that debuted at February's 24 Hours of Daytona sports car enduro.

Like previous entries in the Z06 series, the 2015 Corvette Z06 will feature fatter tires (from Michelin), stiffer suspension, and bigger brakes (from Brembo), with the option of a carbon-ceramic brake package.

But the key elements that separate this Z06 from its predecessors, according to GM, are a hefty horsepower boost and exceptional aerodynamics. The Z06 spent extensive time in the wind tunnel and emerged with more downforce than any car GM ever built or tested, the company said. A revised front air dam, wider fender flares, and big NASCAR-style rear spoiler are the most visible elements of the aero enhancements, but the mesh grille makes an interesting footnote. The carefully tuned mesh actually funnels air more efficiently than an opening with no grille at all, and also aids in brake cooling.

Will the new Z06 be the fastest Corvette ever? That remains to be seen. The new Z06 will be propelled by a 6.2-liter supercharged V8, the LT4, which Chevy characterizes as all-new, though like other Corvette engines its lineage dates to the immortal small block of 1955. With supercharging, a Z06 first, GM engineers said they expect to see at least 625 horsepower and 635 pound-feet of torque.

That's very close to the output of the supercharged LS9 V8 (638 horsepower, 604 pound-feet) employed in the rocket tech ZR1, the first Corvette capable of exceeding 200 mph. And it's a big jump from the standard Stingray's 455 horsepower and 460 pound-feet.

However, aerodynamic downforce, which gives a car more grip in cornering, especially at high speeds, comes at the expense of aerodynamic drag. Top-speed testing has not yet been conducted, so no one is certain what it will be. GM said it is still working on the basic aero package and may tweak the design further. In fact, there will be three different aero add-ons available.

One other new element will be the availability of a new 8-speed automatic transmission. Developed by GM, it will be equipped with paddle shifters and Chevrolet promises shift response times equal to German dual clutch automatics. The standard transmission will continue to be the seven-speed rev-matching manual.

While the Z06 looks like a formidable package, the most capable Corvette ever, the folks at Chevrolet marketing know that there's no such thing as enough. Thus there will be a Z07 option package, which includes even more aggressive rubber, even more downforce, and the carbon ceramic brake package.

GM had no comment regarding pricing when it was unveiled at January's North American International Auto Show in Detroit. The current Z06 started at about $76,500. We expect the new one to cost substantially more. And yet it should still be a bargain among cars in this performance class.