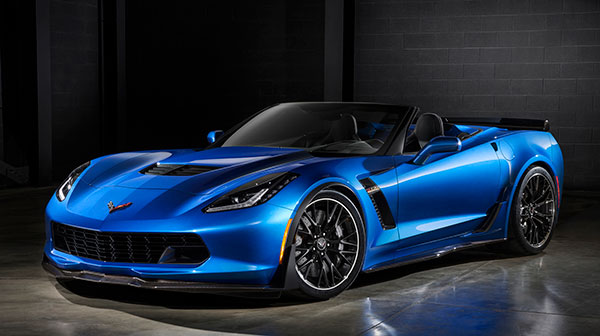 Only a few short months after the Z06 coupe's debut, the drop-top version of Chevrolet's most powerful Corvette joins the lineup after being unveiled ahead of the New York International Auto Show. Like the coupe, the 2015 Chevrolet Corvette Z06 convertible boasts a massive horsepower boost over the base Corvette Stingray, as well as plenty of slippery aerodynamic enhancements.

This is the first factory-built Z06 convertible since the 1963 model year because previous engineering challenges prevented the Z06's structure from being rigid enough to handle a topless design. Now, thanks to a chassis that uses five custom aluminum segments, the 2015 Corvette Z06 is 20-percent stiffer than the previous hardtop Z06 and can thus handle the immense load of pulling Gs around a fast corner.

Under the hood is the same engine used in the 2015 Corvette Z06 coupe, a 6.2-liter supercharged V8 rated at a whopping 650 horsepower and 650 pound-feet of torque, making it the most powerful production car GM has ever made, and surpassing early estimates of 625 hp and 635 lb.-ft. To put that into perspective, the previous Corvette ZR-1 supercar makes 638 hp, while the current standard Corvette Stingray's makes 455 hp and 460 lb.-ft. of torque. Like the base Corvette, the Z06's powerplant uses direct injection, cylinder deactivation and variable valve timing to maximize efficiency.

Transmission choices will include a 7-speed manual, or a new 8-speed automatic, which Chevrolet claims is faster than Porsche's PDK dual-clutch transmission. The new automatic is also lighter, due to extensive use of magnesium and aluminum, and is expected to improve fuel economy by about five percent. Early 0-60 mph estimates for the 2015 Corvette Z06 were about 3.4 seconds with the manual transmission, though with the new horsepower ratings it's possible we could see an even quicker time. The automatic transmission is also expected to be a couple of tenths faster.

As with the standard Corvettes, the latest iteration of the Z06 is also improved on the inside, with better finishes and materials. Sport seats are built using an underlying structure of magnesium for reduced weight and added stiffness.

The 2015 Chevrolet Corvette Z06 convertible is expected to hit dealerships in early 2015. Pricing hasn't been announced, but we'd estimate a starting price of around $84,000.