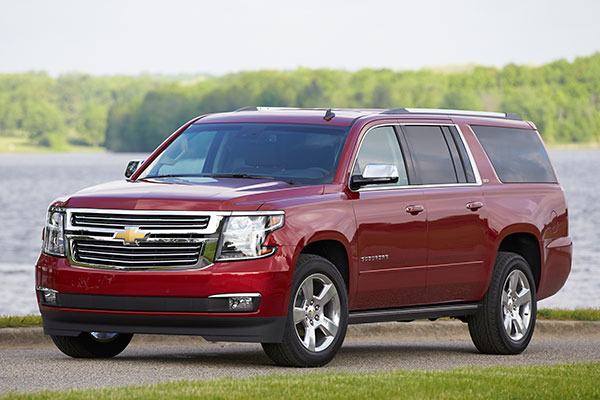 The Chevrolet Suburban holds title as America’s oldest continuously sustained nameplate, a legacy that dates to 1935, suggesting that the basic idea, a big family hauler capable of seating eight or nine passengers, hauling lots of cargo, towing substantial loads, or combinations of all three, has made sense to a lot of buyers for a long time.

This is the 12th chapter in the ongoing story, a makeover that Chevrolet characterizes as all-new. However, just new seems a little more accurate. The foundation, an updated version of the rugged GM 900 truck frame (the Suburban has always been a body-on-frame design), is basically the same one that supported the 11th generation, and chassis and body dimensions are essentially the same.

On the other hand, the sheetmetal, with a distinctive character line running the length of the body just below the greenhouse, is all new. So is the interior. So is the 5.3-liter V8 EcoTec3 engine, although the specs may not reflect this at a glance. Same bore, same stroke, same displacement, and those bore centers date all the way back to the small-block Chevy V8 of 1955. They seem to have become as inviolable as holy scripture at General Motors powertrain engineering.

But this is a much different 5.3-liter V8, with a new aluminum block, new aluminum cylinder heads, new crankshaft, new pistons, higher compression ratio, direct fuel injection. More power: 355 horsepower (380 hp on E85 fuel) versus 320 in the previous version, 383 pound-feet of torque (416 lb.-ft. on E85), enough grunt for a towing capacity of 8000 pounds with four-wheel drive, 8300 pounds with 2WD.

More impressive, there’s improved fuel efficiency to go with the increased thrust: 15/22 mpg City/Highway with 4WD, according to the EPA, 16/23 mpg for rear-wheel-drive versions. Pretty impressive for an engine configuration, pushrod-activated overhead valves, that pre-dates World War I.

Equally impressive is how well the new Suburban comports itself on the road. We hear the term car-like driveability in connection with a lot of crossover SUVs, but it’s a non-sequitur with vehicles in this size class. Still, the Suburban is gratifyingly prompt in its responses, an active safety plus for a vehicle that’s likely to be loaded with kids, and it’s a smooth operator in terms of ride quality.

The new skin isn’t exactly head-turning, it’s hard to make a big two-box truck look like anything but a big two-box truck, but there are enough styling tweaks to differentiate it from generation 11, it’s unmistakably Chevy, and aerodynamic efficiency has been improved. Aerodynamic efficiency isn’t a concept we associate with a vehicle that has the contours and dimensions of a small garden shed, but the improvement contributes to fuel economy as well as reduced interior noise levels. Much reduced.

There are elements that could be even better. For example, though the new 5.3-liter V8 is robust, there’s a senior member of the EcoTec3 family, 6.2 liters, substantially more power, but even though it’s an option in the Chevy Silverado, it’s not offered for the Suburban. If you want 6.2 power, you’ll have to visit a GMC store, it’s limited to the Yukon and Yukon XL.

In this area at least, power, Ford’s 2015 Expedition EL will have a slight edge on the Suburban when the facelifted Ford begins rolling into dealerships in the second half of 2014. The extended wheelbase Expedition is the Suburban’s only real direct rival, and Ford is replacing its rather tepid 5.4-liter V8 with an Ecoboost (read: turbocharged) 3.5-liter V6. That will give the biggest Ford a little more power than the Suburban, 365 hp, 420 lb-ft, a higher max towing capability (9200 lb), and probably a slightly higher EPA fuel economy rating.

However, the Suburban’s makeover is otherwise far more extensive, and based on our exposure thus far we think Chevy’s hefty family wagon continues to rule this class.

Safety features on all models include a safety alert seat that vibrates if the system determines the driver is at risk of colliding with another vehicle. A rear vision camera comes standard that shows the area immediately behind the vehicle on the audio screen, also helpful for hooking up a trailer. Bucket-seat models include a front center air bag that deploys from the inboard side of the driver’s seat and inflates between driver and front passenger for added protection in a side-impact crash. Also available: side blind-zone alert, lane-change alert, rear cross-traffic alert, forward-collision alert, lane-departure warning, adaptive cruise control, crash-imminent braking. All Suburbans come standard with seven air bags; anti-lock brakes, electronic stability control, trailer sway control, traction control.

The basic shape of the 2015 Chevrolet Suburban is familiar, but the skin is all new, with attention to aerodynamics as well as aesthetics. Alert Suburban-watchers will recognize the subtle distinctions between the new fascia and its predecessor, especially around the grille and headlights. That crease just below the window line, shared with the GMC Yukon, lends some interest to a profile that was previously slab-sided, the side mirrors have turn signal repeaters, and there’s a power option for the rear liftgate. Chevy also points out that while there is structural commonality, neither the Suburban nor the Tahoe share any sheetmetal with the Silverado pickup. Wheel options include 18-, 20-, and 22-inch choices.

The inner Suburban is all new, with improved materials, new seats, new (more legible, more attractive) instruments, and enhanced connectivity and infotainment via the MyLink system with an 8-inch color touch screen in the middle of the dashboard. You can’t get the new head-up display; GM reserves that for the GMC Yukon lineup. And the fancy High Country interior option that’s new this year with the Chevy Silverado isn’t available for the Suburban.

Leather trim is offered, but if you want the really posh furnishings you need a Yukon Denali. But leaving that aside, it’s hard to find fault with this new interior, even in the standard base model. A couple of upgrades merit mention. First, the design team invested substantial time and budget in noise suppression, making this (and the Yukon XL) just about the quietest rides in their class. Second, the rear rows fold flat, which wasn’t true in previous generations. And Chevy offers a power-folding option for the seatbacks, as well as the rear hatch.

The 2015 Suburban may be a smidge lighter than generation 11, but it’s still close to 3 tons, with a long wheelbase and a tall profile. Inevitably, that combination limits handling responses and lengthens stopping distances. On the other hand, the chassis engineers have done a very good job with the new suspension tuning, giving the Suburban surprisingly brisk responses to commands from the helm. This is attributable, at least in part, to improved roll stiffness. Though the center of gravity is high in a vehicle of this type, giving mass more leverage in cornering maneuvers, that phenomenon is minimized by suspension spring rates and antiroll bars that limit body roll, allowing quicker recovery in rapid transitions. And it helps that weight distribution is close to 50/50, front/rear.

The steering, a new electric assist power rack and pinion system, is a little numb and rather slow at 3.4 turns lock to lock. But even so, the new rig is agile by big sport-utility standards. This doesn’t make the Suburban a slalom star; mass will have its say in any dynamic equation. But it does give the driver a better chance of turning a crash into a near miss. And it does so without sacrificing ride quality, which trends toward firm, a function of spring rates designed to handle substantial loads, but it takes a sharp, nasty bump to find its way to the vehicle’s occupants.

Braking is another strong suit, again with a for-its-size asterisk. Brake pedal feel is firm, it’s easy to modulate pedal pressure, and the Suburban stops straight and true. We can’t testify to fade resistance, other than to say we failed to provoke any fade with a few hard stops, and we don’t know about stopping distances other than to mention that GM claims a slight reduction. But we can testify to system function, which is very good.

One final noteworthy dynamic element: interior noise, as in not much. Anyone who’s unable to converse at living room voice levels when the Suburban is operating at freeway speeds needs a hearing aid. Wind noise is minimal, road noise ditto, and the only time the engine becomes audible is when the driver tramps on the gas, opening flapper valves in the plumbing and adding a pleasant V8 baritone to the mix. 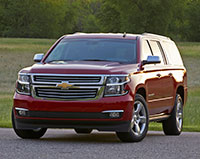 Smooth, exceptionally quiet, comfortable, capable, and powerful, the latest Suburban continues to be the quintessential big job family wagon. GM’s decision to withhold the 6.2-liter V8 engine option from Suburban buyers is a little hard to defend, and with a price escalator that climbs well past $70,000, this vehicle clearly falls into the realm of discretionary spending, exercise discretion with those option boxes. Nevertheless, among vehicles of this type, the new Suburban still ranks as the big cahuna. You can get a fancier version at the GMC store. But with the exception of the increased power option, you won’t get any better.