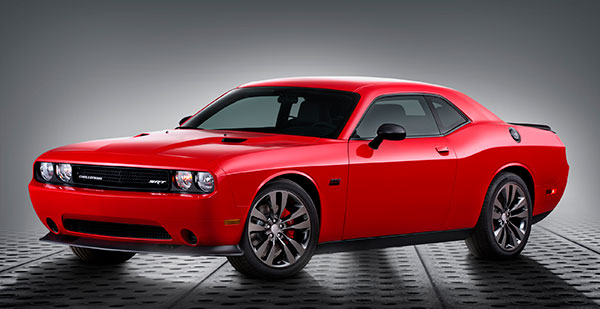 It's unusual for a carmaker to upstage its newest hot rods, but that's precisely what Dodge is doing with its 2015 Challenger lineup.

Just one month after unveiling its updated Challengers at the New York International Auto Show, an extensive freshening topped off by the 485-horsepower 392 Hemi Scat Pack Shaker package, Dodge has upped the ante with a super Challenger propelled by the most potent street legal V8 Chrysler Corporation has ever produced.

It's called the Hemi Hellcat.

Operating on the long-established principle that too much power is almost enough, Dodge and its Street and Racing Technology (SRT) performance group have conspired to produce a supercharged version of Chrysler's 392-cubic-inch (6.4-liter) Hemi V8 capable of churning up more than 600 horsepower and 575 pound-feet of torque, according to the company.

There will be two versions of the 2015 Dodge Challenger SRT: the standard version uses a naturally aspirated version of the 392 Hemi (485 hp, 475 lb-ft), and the supercharged Hellcat.

Both engines will be offered with a choice of a 6-speed manual transmission, borrowed from the Viper inventory, or Chrysler's TorqueFlite 8-speed automatic.

The distinction between the Challenger 392 Hemi Scat Pack Shaker and the SRT version is subtle. Engine output is identical, but the SRT sports the bigger Brembo brake package; with 15.4-inch rotors and 6-piston calipers, it's the biggest brake and caliper components ever offered on an SRT vehicle. Other upgrades include 9.5 x 20-inch forged alloy wheels wearing 275/40 Pirelli P-Zero tires.

Those same brakes and wheels support the Hellcat version, but the big news is underhood, where the supercharged engine sends power to a limited-slip rear differential via a drivetrain that's been strengthened in every component: transmissions, clutch, halfshafts, and of course the rear end.

The starting point for the engine was Chyrsler's 6.4-liter Hemi, iron block, aluminum cylinder heads, but the piston stroke has been shortened from 94.6 to 90.9 mm, reducing displacement to 6.2 liters, to accommodate a heftier forged crankshaft.

Though the Hellcat's architecture is otherwise the same as the 6.4-liter version, Dodge claims that 92 percent of its content is new.

The IHI supercharger is a Lysholm screw-type. Dodge's SRT power mavens chose supercharging over turbocharging for its instant throttle response. They also developed a Hellcat specific exhaust system with low back pressure and a menacing V8 rumble.

Hellcat exterior distinctions are more than mere cosmetics. The hood scoop, for example, extracts hot air to the intake system. SRT also removed the inboard headlamps and devoted those openings to cold air intake. And the lower front fascia openings that contain fog lamps in other Challengers are empty, plugged by covers the owner can remove to feed cooling air to the brakes for track days.

However, while the Hellcat will undoubtedly give a good account of itself in race track time trials, Dodge division boss Tim Tuniskis insists that it's designed to be useful as an everyday car.

With everyday use in mind, Hellcat owners will get two keyfobs, one red, one black. When the driver starts the car with the red fob, it makes the engine's full power potential available, while the black fob reduces peak output substantially. That's the fob owners will hand over to valets and/or other drivers, minimizing temptation.

Due to reach showrooms in the last quarter of the year, Hellcat pricing is a matter of conjecture. But we can glean clues from super versions of competing pony cars. The 580-hp supercharged Chevy Camaro ZL-1, for example, starts at about $60,000, while the pricetag of the 505-hp track-ready Z28 soars to a heady $75,000. A new Mustang is due to go on sale this fall, with a supercharged Shelby version sure to follow. In the meantime, the current 660-hp GT 500 starts at less than $60,000.