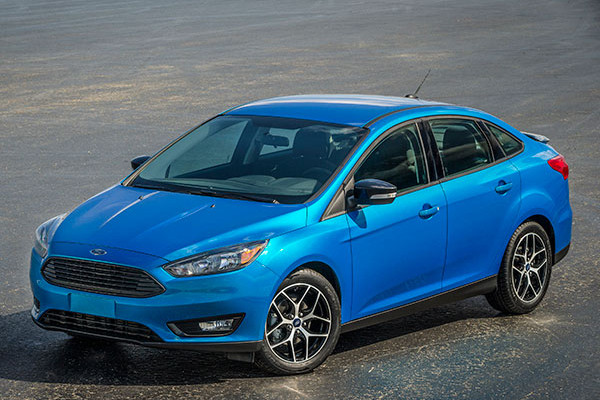 The 2015 Ford Focus sedan is restyled with a new hood, headlights and grille. The grille uses Ford's new signature trapezoidal-shaped opening and strong horizontal lines, scaled proportionately to the compact Focus, giving it a stronger family resemblance to the midsize Fusion and the subcompact Fiesta. In the rear, the 2015 Ford Focus gets a redesigned trunk lid and new tail lights.

Inside, the 2015 Focus gets more sculpted seats and a new center console, including a new cupholder design. Enhanced features of Ford's Sync infotainment system include connected apps that can access real-time vehicle data including speed, acceleration, odometer and location information, as well as refinements to the voice-activation system and a more seamless integration with compatible iPhone and Android devices. Also standard on the 2015 Ford Focus is a rearview camera and Ford's MyKey system, which allows owners to limit vehicle speed and audio volume, as well as block incoming calls and text messages to paired phones.

Making its debut on the 2015 Ford Focus is Ford's 1.0-liter three-cylinder EcoBoost engine, a small but efficient powerplant used also on the Fiesta, mated to a new 6-speed manual transmission. Official specs haven't been released, but the 1.0-liter engine makes 123 horsepower and 125 pound-feet of torque in the smaller Fiesta. We'll see if those numbers hold true for the heavier Focus.

Ford's 2.0-liter four-cylinder engine rated at 160 horsepower will also be offered, with a 5-speed manual or a 6-speed dual-clutch automatic transmission.

From an engineering standpoint, the 2015 Focus gets a revised suspension with a new shock absorber valve design, revised electric power steering and software updates to its dual-clutch automatic transmission, which Ford says will equate to better performance and handling, as well as a quieter ride.

Deliveries of the 2015 Ford Focus sedan are expected to begin in the latter half of 2014. Pricing hasn't been announced, but we expect a modest bump over the previous model, starting at around $18,000.