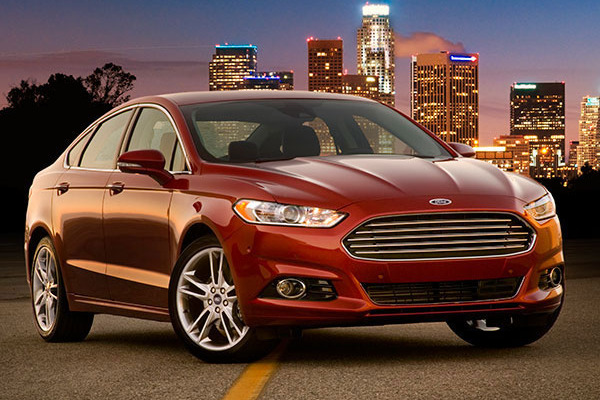 Ford Fusion is a five-passenger, four-door midsize sedan. Its wide grille and sleek lines make Fusion appealing to the eye, and its wide range of available powertrains, including gas, hybrid, and plug-in, make it appealing to a variety of drivers. Fusion is available with front-wheel drive or all-wheel drive.

There is a dizzying array of powertrains available for the Ford Fusion. Standard is a 175-horsepower 2.5-liter four-cylinder paired with a 6-speed automatic transmission that earns an EPA-estimated 22/34 mpg City/Highway.

The 1.5-liter EcoBoost engine produces 178 horsepower and is EPA-rated at 25/37 mpg City/Highway with front-wheel drive and 6-speed automatic. A 178-hp 1.6-liter EcoBoost is available with a 6-speed manual gearbox that earns 25/37 mpg.

A 240-hp turbocharged 2.0-liter four-cylinder is available with a 6-speed automatic that is rated at 22/33 mpg City/Highway with front-wheel-drive, or 22/31 mpg with optional all-wheel drive.

Fusion Hybrid models pair a 2.0-liter four-cylinder with an electric motor and an electronically controlled continuously variable transmission (CVT) good for a maximum of 188 net horsepower, with fuel economy EPA-rated at 47/47 mpg City/Highway.

Ford Fusion Energi is plug-in hybrid that uses the same 2.0-liter four-cylinder found in the Fusion Hybrid, along with an electric motor and lithium-ion battery pack. Fusion Energi is designed to run on pure electric power for short commutes and can be charged using a 120-volt or 240-volt outlet. Ford claims a combined range of up to 620 miles between the battery and the gas tank, with up to 21 miles in all-electric mode. It’s EPA rated at 100 MPGe (miles per gallon equivalent), and has a charge time of about two and a half hours using a 240-volt charger, and about 7 hours using a 120-volt household outlet.

Although classified as midsize, the 2015 Ford Fusion feels large and cavernous. This second-generation Fusion rides on a wheelbase that’s about five inches longer than the first-generation version (2006-12), but overall body length is only an inch longer thanks to shorter overhangs.

Our test drives revealed solid handling and a comfortable ride, although the Fusion doesn’t feel as nimble as other midsize sedans. Fusion feels big while driving, and a U-turn requires of plenty of space, although it beats the Honda Accord in this regard.

We found the Fusion Hybrid operates smoothly but we didn’t love the low, grumbly sound it makes.

Technology includes Ford’s Sync voice recognition and the MyFord Touch interface although both have their idiosyncrasies and can be frustrating, despite recent improvements. Optional advanced safety features include adaptive cruise control, blind-spot detection, lane-keeping assist, and an automatic parallel parking feature, the latter of which is normally reserved for high-end luxury cars.

Its sleek, European-inspired design and a wide choice of powertrain options make the Fusion an attractive choice. Its competition includes the Honda Accord, Toyota Camry, Hyundai Sonata and Nissan Altima.

The 2015 Ford Fusion offers an array of choices and option possibilities.

Fusion Hybrid S ($26,475) is powered by a 2.0-liter inline-4 paired with an electric motor and an electric continuously variable transmission (eCVT) and comes with dual-zone automatic climate control, cloth seats made from 100 percent recyclable materials, cruise control with EcoCruise button, the six-speaker audio system found on the Fusion SE, a tire repair kit and unique 17-inch wheels. Other standard features are the same found on the Fusion S.

The exterior design of the Ford Fusion is by far one of the most striking among non-luxury vehicles. Its wide-mouth horizontal grille evokes the design language of Aston Martin (which, for a time, was owned by Ford), and its wraparound headlamps and sharp body creases could have been penned by designers from a luxury German brand. Ford succeeded in making the car look high-end and modern, with styling cues that are aggressive but still approachable.

Look carefully though, and you’ll see places where it appears engineers had to shoehorn the inner workings to fit the design, such as the large gaps between the hood seams and the windshield.

Although the Fusion is classified as midsize, it looks and feels large. It rides on a wheelbase that’s about five inches longer than the old model (2006-12), although overall body length is only an inch longer, thanks to shorter overhangs. The Fusion is about an inch wider and taller than the last generation. Still, these growing dimensions aren’t unusual, as the Fusion’s measurements are very closely matched to those of the Honda Accord and Nissan Altima.

The base model comes with 16-inch steel wheels, which is disappointing considering the Honda Accord comes with alloys.

The Ford Fusion has a cavernous cabin. There’s plenty of space up front for legs, shoulders and heads, and roominess is accentuated by concave door trim, which looks as if it were pared away by a giant potato peeler.

Strangely, the narrow, body-hugging sport seats don’t match their cavernous surroundings. Front seats sit low in the cockpit, and combined with the relatively high hood line, we had a hard time finding a comfortable seat height. On the plus side, the headrests sit at a surprisingly neutral angle, and don’t force your head to tilt forward as aggressively as in some other vehicles.

In a nod to sustainability, the cloth seats that come standard on the Fusion Hybrid and optional on the Fusion SE are made from 100 percent recyclable materials, and the seat cushions and head restraints use a polyurethane foam that Ford says is derived from the oils of plant seeds, including soybeans. They had a slight sheen, and reminded us of dressy twill pants one might find at Banana Republic. Leather on the Titanium trim is nice, but not buttery soft. Materials and finishes on the dash and upper portions of the doors and dash are straightforward and attractive.

The center stack on base models uses manual climate control knobs that are easy to see and are well laid out. On models equipped with the MyFordTouch interface, climate and other functions are adjusted via touchpad controls, which we found were not always accurate or responsive. In fact, while we liked the look of the 8-inch touchscreen display, we were often frustrated while using the MyFordTouch interface.

The driver’s instrument cluster is modern and good-looking, with a pleasing illuminated blue needle on the speedometer. An optional dual LCD display allows drivers to toggle through a variety of functions. One nifty feature is the overhead interior lighting, which you can turn on and off with the swipe of a finger.

The steering wheel feels fine in hand, and is equipped with a plethora of buttons for vehicle information and settings, volume and audio input, cruise control, handsfree phone operation and voice activation. It can be distracting to find everything at first, and takes some time to memorize.

Rear seats are comfortable, with adequate leg and knee room. Headroom clearance is good for passengers up to about six feet tall. There is somewhat limited toe room due to what we guess is a variety of wires and electronics stuffed under the front seat. Adjustable headrests are comfortable for passengers, but can interfere with rearward visibility.

Fusion offers 16 cubic feet of cargo space, which is slightly more than its competitors: Camry and Altima each offer 15.4 cubic feet, and the Accord measures 15.8. The battery pack in the Fusion Hybrid cuts down significantly on trunk space to 12 cubic feet, and creates an odd, high shelf in the back half of the cargo area.

The Ford Fusion feels like a big car on the road as well as in the cabin. Steering is light and comfortable. Handling is solid and on par with our expectations for a midsize family sedan, although, Fusion doesn’t feel as nimble as other cars in its class.

Fusion’s turning circle of 37.7 feet bests the Honda Accord’s 38.1 feet, while both need more space than that required of the Toyota Camry with its 36.6-foot turning circle. Those figures don’t sound that much different but can spell the difference between making a U-turn in one fell swoop versus having to make a three-point turn. Brakes are smooth and confidence-inspiring.

In its base 2.5-liter iteration, the Fusion provides decent, albeit docile acceleration. For more oomph, go for the 2.0-liter turbo.

The 6-speed automatic transmission shifts in all the right places. Titanium models are equipped with paddle shifters for manual gear changes should the driver be so inclined.

Thanks to its electric motor, the Fusion Hybrid offers plenty of pep off the line. The electronically controlled CVT is smooth and seamless, and brakes are firm and responsive, without feeling grabby like many vehicles that use regenerative systems. Its low, grumbly sound is rather unpleasant, however, despite Ford’s attempts to muffle it with acoustic material.

The Ford Fusion Energi is plug-in hybrid that uses the same 2.0-liter four-cylinder found in the Fusion Hybrid, along with an electric motor and lithium-ion battery pack. Fusion Energi is designed to run on pure electric power for short commutes and can be charged using a 120-volt or 240-volt outlet. It has a bigger onboard battery and uses different cells. Ford claims a combined range of up to 620 miles between the battery and the gas tank, with up to 21 miles in all electric mode. It’s EPA rated at 100 MPGe (miles per gallon equivalent), and allows the driver to choose between three modes: EV Now, EV later and Auto. As the names suggest, EV Now will operate only in all-electric mode; EV Later switches into hybrid mode and saves the battery, and Auto will self-select modes depending on driving demands.

We drove the Fusion Energi SE around sprawling Los Angeles, and found that its EV range lived up to Ford’s claims. On a 19.5-mile drive on city streets, we kept the Fusion Energi in EV Now mode the entire time and brought it back with 3 miles of charge to spare. We didn’t modify our driving style to maximize range, and even passed a few cars with gusto. Although, we kept the A/C off, which helped to stretch our range (Ford engineers say the climate control system is the biggest drain on the battery). This isn’t much of an issue for those living in mild climates like Southern California, but expect performance to drop if you use the A/C or heater frequently.

Regenerative braking systems typically make for a grabby brake pedal feel; not so in the Fusion Energi. The pedal feel was the smoothest we’ve felt in this type of car. The only thing that irked us, besides certain aspects of the MyFordTouch interface, was that startup was completely silent, which created a debate amongst passengers as to whether the car was actually on. However, this characteristic is typical of electrified vehicles.

Ford Fusion is a competitive family sedan that makes a bold statement with an eye-catching design and multiple engine choices.