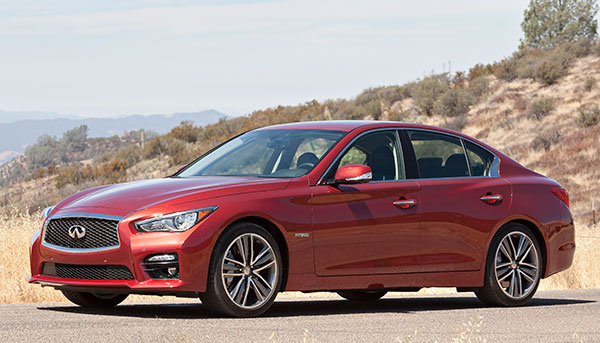 Infiniti Q50 is a luxury four-door sedan that competes with the Audi A4, BMW 3 Series, Cadillac ATS, Lexus IS, and Mercedes-Benz C-Class.

The Q50 was launched as an all-new model for the 2014 model year and replaced the Infiniti G37 sedan. Little else has changed for the 2015 model year except that the 2015 Infiniti Q50 offers a new Performance Wheel Package with 19-inch superlight forged aluminum-alloy wheels with 245/40R19 front and 265/35R19 rear summer tires.

The Infiniti Q50 features sophisticated design, a powerful V6 engine, and comes loaded with technology. The Q50 delivers sporty handling, a benefit of its rear-wheel drive. It isn’t quite as sharp as a BMW 3 Series sedan, but the Q50 is more engaging to drive than a Mercedes-Benz C-Class.

The Q50 comes standard with a 328-horsepower 3.7-liter V6 and is available in Q50, Q50 Premium, and sporty Q50 S models. The Q50 Hybrid combines a 3.5-liter V6 with a 50-kilowatt electric motor and a lithium-ion battery pack for a net output of 360 horsepower. Both standard and hybrid Q50s are available with all-wheel drive, and all models come with a 7-speed automatic transmission.

Q50 delivers quick acceleration performance, especially in Sport mode with the Q50S, and the brakes are confident. Handling rivals that of the Mercedes-Benz C-Class or Lexus IS, particularly around town, though the steering lacks feedback and feels numb and when pushed hard in corners, it slides and leans.

Interior execution is well done, with a simple and elegant cabin design. The Q50 interior looks cleaner than a BMW 3 Series interior, and feels more inviting than the Audi A4’s stark, Bauhaus-style cabin. Seats, however, are good for large males but are a little large for an average-size female.

The Infiniti InTouch infotainment system uses two large screens in the center stack. One displays the map, and another controls audio, navigation, phone, apps and vehicle settings. This setup lets users access other information while still being able to see where they are on the road. The interface is a combination of touchscreen, hard buttons, and a round control knob on the center console. For the most part, it’s easy to use, though we found some functions laborious to access, and voice recognition was mediocre at best.

Safety features on all models include front side airbags, side curtain airbags, antilock brakes, stability control, traction control, and rearview camera. Optional safety features in addition to all-wheel drive include front and rear parking sensors, a 360-degree camera system, adaptive cruise control, blind-spot warning, lane departure warning, forward and back-up collision warning (which will automatically apply the brakes if a collision is deemed imminent) and Active Lane Control, which can automatically make minor steering corrections if a driver swerves out of his or her lane. All-wheel drive can enhance handling stability in slippery conditions.

From the side, the Q50’s lines are more fluid and flowing. The hood is long and sleek. Unlike the G37 sedan, which had a character line flowing through the door handles, the Q50’s distinctive crease is higher. It flows into the bodyside from behind the point of the wraparound headlights, running above the door handles right beneath the side windows and into a softer, slightly rising rear character line that arcs from the rear door to merge into the deck lid. Above that flowing line is a crescent-cut C-pillar, extended to the arched roofline. The rear window features a subtle curvature reminiscent of BMW’s Hofmeister kink.

Q50’s coefficient of drag (a measure of aerodynamic shape) is a sleek 0.26, though slightly higher (i.e., more drag) for Sport models.

Inside the Q50 cabin, features and materials are tasteful. The design is simpler than the interior of the BMW 3 Series, but feels a bit more inviting than the cockpit of an Audi A4.

Seats are supportive, especially in the Q50S, which has additional side bolstering for spirited driving. However, they’re quite large and feel like they’re built for six-foot-four men, thus uncomfortable for an average-size female. Anyone with short legs will be driving with their feet sticking straight out, thanks to the unusually long seat cushion that prevents knees from bending.

Standard upholstery on the base and Premium models is vinyl. Leather upholstery came standard with our Q50S, but we found it feels plasticky, not buttery soft. 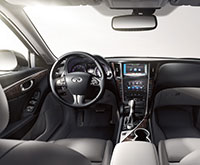 Gauges look upscale and are easy to read, with white text on a black background, accented with rings of violet-blue. Between the speedometer and tachometer is a display screen that can switch between fuel economy, audio, navigation and vehicle information. Most of the functions, plus phone, voice recognition and cruise control, can be accessed by the variety of buttons on the multifunction steering wheel.

Infiniti’s InTouch infotainment system uses two large screens in the center stack: one that displays the map, and another that controls audio, navigation, phone, apps and vehicle settings. We like this setup, which allows users to access other information while still being able to see where they are on the road. The interface is a combination of touchscreen, hard buttons, plus a round control knob on the center console, like a mini version of BMW’s iDrive. The ability to access the same information multiple ways aims to pacify both screen-touchers and button-pushers, and for the most part is easy to use. However, we found some functions laborious to access, and the voice recognition was mediocre at best.

As with most vehicles in this class, the Q50 lets users tether their smartphones via USB and/or pair via Bluetooth to use phone, music and address book functions. Many users like the Google maps mobile app, and if your smartphone is paired via Bluetooth or tethered with the USB cable, Google’s voice navigation will play through the car’s speakers. The Q50 also offers a text message sending and reading function, but we couldn’t get it to work with paired iPhone 5s, iPhone4 or Samsung smartphones.

The standard sound system is competitive with that in any luxury sedan. We found the Bose system on the Q50S sounded rich, full and crisp, even when playing MP3 files from our iPod and streaming audio at loud volumes. We think it’s one of the best stereo systems in the segment.

Backseat space is average for the class, and relatively comfortable for medium-sized adults on shorter trips. If the driver is tall, there won’t be much legroom for the rear passenger. But with the front seat midway or all the way up, the space is livable. Maximum rear legroom measures 35.1 inches, the same as in the BMW 3 Series, and considerably more than the 32.2 inches in the Lexus IS.

Trunk space in the Q50 is relatively roomy at 13.5 cubic feet, slightly more than the 13 cubic feet in the BMW 3 Series but a bit smaller than the 13.8 cubic feet in the current Lexus IS. Still, we wish there were some side cubbies or nets to store smaller items so they don’t go flying around while driving. Premium and S models can be equipped with a center pass-through for long items, and 60/40-split folding rear seats come with the optional Deluxe Touring Package.

We found the Infiniti Q50S pleasantly swift. Power from its 3.7-liter V6 was readily available and we found it easy to merge and pass on the freeway, even on steep uphill climbs when everyone else around us seemed to be struggling, though perhaps they weren’t pushing hard enough on their pedals.

Throttle response was a little neurotic, however: Sometimes there’s a split second of nothing at tip-in, then whoosh, off we went like a jackrabbit. In the Q50S, we could choose from three drive modes: Eco, Normal and Sport. Even in Normal mode, it felt plenty peppy, and we were surprised at first that we weren’t in Sport mode. We kicked it into Sport and the driving experience became more enjoyable. If we gave it a lot of throttle, it would emit a satisfying exhaust growl after the kickdown. Predictably, fuel economy would suffer when we zoomed around in Sport all the time with a heavy foot. In Eco mode, shift points were relaxed and the throttle became less responsive, but it still felt satisfying for driving around town. It wasn’t gutless, like most Eco modes used by other manufacturers.

Steering is perhaps the Q50’s biggest shortcoming; it lacks feedback and feels numb, especially for drivers who are used to a BMW’s steering feel. The car goes where you point it, but has a hollow characteristic, almost like a USB-powered steering wheel hooked up to a home video game console. Different settings vary the steering effort, but we still felt disconnected, especially compared with the dialed-in steering feel of the BMW 3 Series.

Q50S features a sport-tuned suspension and adjustable steering settings. We found handling on par with the Lexus IS and Mercedes-Benz C-Class. But when pushed hard around corners, the Q50 starts to reveal its weaknesses in the form of slipping tires and body roll. Compared with a BMW 3 Series, the Q50S is a better freeway cruiser than a track-day star.

Braking is good, thanks to ventilated discs all around.

Fuel economy for the 2015 Infiniti Q50S is EPA-estimated at 20/29 mpg City/Highway, which isn’t bad for a V6 engine. After a week of driving in mixed environments in mostly Normal mode (with occasional stints in both Eco and Sport), we achieved a less-satisfying average of only 17.1 mpg, according to the onboard computer.

The Infiniti Q50 is a solid choice for drivers who want an alternative to Mercedes, Audi, BMW, and Cadillac compact luxury sedans. The Infiniti offers elegant design, many technology features, and a powerful V6 engine. However, it fails to measure up to some competitors when it comes to ride and handling.

NewCarTestDrive.com correspondent Laura Burstein filed this report after her drive in an Infiniti Q50S around Los Angeles.