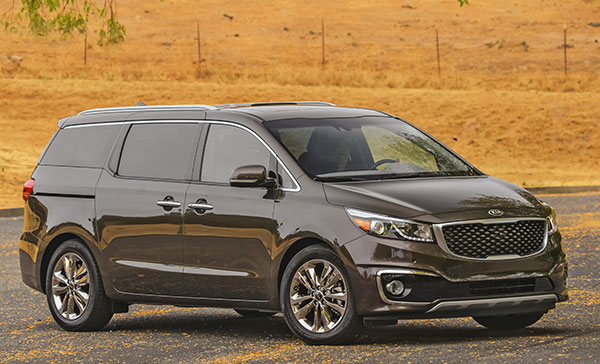 The 2015 Sedona is Kia’s response to a minivan market that has been shrinking steadily over the years in response to the growing popularity of crossovers (CUVs) as well as the peculiar stigma with which minivans seem to have been afflicted. This negative-image issue appears particularly pronounced among men, who somehow feel their masculinity is called into question by the family-life connotations of a minivan.

Even the actual number of players is reducing: three more minivan models go away this year. Paradoxically, minivan distribution has become what Kia calls bi-modal. They are being purchased just about as much by so-called empty-nesters (couples whose children have already left home) as they are by young families.

And you can see why. These vehicles offer extra seating capacity for two- or three-couple dinner outings as well as for growing families. Access is generally better than in other vehicle styles, luggage space is flexible and large, and the driving position is higher than in conventional sedans.

This in mind, Kia has decided to continue to go after the bi-modal buyers, but has shifted the new Sedona’s styling emphasis in the direction of the crossovers. There are still sliding side doors, with the prominent slots that Toyota’s Sienna has craftily eliminated, which may have most people identifying it as a minivan rather than as the multi-purpose vehicle that Kia personnel prefer to have it known.

Still, with an overall length some 1.6 inches greater than before, and with shorter front and rear overhangs, the 2015 Kia Sedona does look something like the big crossovers that have been steadily poaching minivan sales.

With the new look of the 2015 Sedona comes a new engine: the 3.3-liter direct-injection V6 also fitted to the Kia Cadenza and Sorento, boasting better power and torque characteristics than the 3.5-liter V6 it replaces. Kia claims the new body has 36-percent-greater torsional rigidity than that of a Honda Odyssey. Add independent rear suspension revised for better isolation, amplitude-sensing dampers, and an elaborately insulated passenger compartment, and it’s clear that the engineers were looking for a smooth and quiet ride.

The 2015 Kia Sedona has an aggressive face, with a prominent version of the Kia signature grille adjoining large headlamps and LED positioning lights. The bumper is conspicuously slotted, with end panels that echo the grille shape. On up-level models, fog lights punctuate the bumper side edges. An under bumper panel mimics a bash plate, helping associate the Sedona with the CUVs it's trying to resemble.

In profile, the Sedona presents a slightly wedged greenhouse with a steeply raked windshield and a shallower rear side glass shape to reduce the boxy silhouette. It helps a little, but isn't as artful at that job as the latest Honda Odyssey. However, the wheel housings are muscular and the wheels fill them to produce a reasonably sporty stance.

The rear aspect has a standard roof spoiler, angular rear window glass and asymmetrical light shapes to add interest to an essentially rectangular space. Of course, there is another contrasting-color under-bumper guard to hint at off-road fantasies.

Ease of access and general comfort levels are strong points for the Kia Sedona. Despite largely unchanged dimensions, the Sedona's interior has more space throughout, with a higher hip point for the driver to provide that elevated, CUV-like, vantage point.

The driver's seat is roomy and supportive, and it provides a good view down the road. 2015 Sedona models come standard with YES Essentials anti-microbial, anti-static fabrics for protection against spills and shock.

The dashboard has more of a horizontal, symmetrical emphasis, though the instrument panel features two large gauges with pronounced slash-cut tubular housings that incline toward the driver. The transmission selector has been moved from the dashboard to the center console, again to get away from the minivan milieu, but also because research indicated that nobody really needs a walk-through from the front to the center seats.

Access to the center row is made easy by the wide, powered sliding doors, and the First Class seats featured in the Sedona SXL are comfortable and commodious. Access to the third-row seats is somewhat compromised by the center row and the fairly high floor, but this six-footer managed to crawl in.

Unfortunately, the relatively low headroom back there suggests that the third row is better suited to kids or smaller adults. No big deal, that's true of most three-row vehicles. And it's more than made up for by the generous space and accommodations of the other two rows.

The seating arrangement itself is flexible depending on trim and option selected. The SXL models we drove on the introductory event had the second-row First Class two-seat arrangement, but a bench-type set up is also available for eight-passenger capacity.

Eschewing the notion of removable seats (too heavy, too awkward, says Kia), the Sedona has some novel solutions for seating arrangements, allowing the third row to fold and drop, and the center row to fold and slide against the front seatbacks for more cargo space.

Sedona is the first Kia to offer the company's UVO3 telematics package, which features various eService applications as well as access to Pandora, iHeart Radio and Yelp.

On the roads around Orange County, California, that were used for the introductory press drive, our Sedona SX Limited demonstrated an impressive combination of refinement and poise. While the suspension is necessarily compliant in this application, we found ride motions to be well controlled.

Sedona SX and upper models come with electric power steering in place of the standard hydraulic system, giving it a slight fuel-efficiency advantage, though less than one mile per gallon so not enough to show up on the fuel economy charts.

Even at a brisk clip along the Ortega Highway, quick left-to-right transitions were managed without any needless roll or wallow. While the electronic steering assist is undeniably numb on center, and light to the touch, the Sedona responds accurately to the helm, needing no ongoing correction in long bends.

The Sedona is soft enough in roll to prevent any needless head-toss effects, but with enough anti-roll bar to arrest rolling motions so that hard corners and quick transitions do not result in wallowing or bouncing. In a vehicle designed to comfortably transport up to seven persons, this is a pretty decent achievement.

This road going composure is undoubtedly helped by the stiff bodyshell, which has also contributed to a pleasant degree of noise isolation. The ride is quiet, even on coarse concrete highways notorious for transmitting roar.

And, for a two-ton van with just a 3.3-liter powerplant, response to the throttle is respectable. Kia has employed a three-stage variable induction system along with dual valve-timing variability to broaden the torque spectrum, and it shows. We hardly ever needed to resort to full-throttle, high-rpm engine use, but when we did, the V6 rewarded us with decent acceleration and an enjoyable, if muted, six-cylinder snarl.

Kia's 6-speed automatic is both responsive and unobtrusive. Shifts in normal driving are smooth and almost undetectable, and the control unit is not easily confused by rapid changes of throttle position. Yet it will quickly find a lower ratio when instructed by a stab at the accelerator pedal.

The all-new 2015 Kia Sedona offers compelling value. There are cheaper domestic vans to be found, but they are relative strippers in comparison to the well-equipped Sedona L, and price comparisons conducted on an equipment-related basis generally give the advantage to the Sedona. The bottom line is that vehicles of this kind deserve a better reception than what they're getting. They are generally better than crossovers at packaging people and luggage. Besides, with a sliding door you can park in the narrowest of parking spots.

Barry Winfield filed this report to NewCarTestDrive.com after his test drive of the Kia Sedona in Southern California.