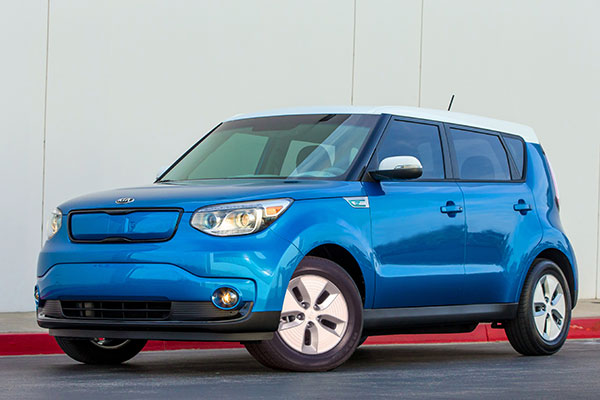 The Kia Soul EV is slated to go on sale in selected markets in the third quarter of 2014 as a 2015 model, and its basic specs are typical of most contemporary electric cars. Kia cites an operating range of 80 to 100 miles between charges, and recharging time for a fully depleted battery is about 24 hours on standard 120-volt household current.

That time can be cut to as little as five hours for owners who buy an optional 240-volt charger, according to Kia.

The Soul EV has three charging ports, to accommodate a variety of charging systems, two for conventional AC service, one for the 480-volt CHAdeMo public charging system developed and promoted by a Japanese consortium. The acronym stands for Charge de Move, and the system operates on direct current (DC), restoring a depleted battery to maximum in 30 minutes or less.

Another possible source of battery replenishment entails a 50-kilowatt public system, which can achieve an 80 percent recharge in about 33 minutes, according to Kia.

Like other EVs, coasting and regenerative braking play an important role in stretching battery life. The Soul will have two operating pre-sets, Eco On, and Eco Off, with Drive and Brake modes for each. Brake mode in the Eco On setting can produce as much as 12 percent recovery of the car's kinetic energy, according to Kia, recovery that translates as battery replenishment.

Still another feature to combat range anxiety, Kia will offer an app that will pinpoint recharging stations. Also, Kia dealers who sell electric Souls will offer free recharging to their customers.

The electric Soul will be propelled is by a liquid-cooled AC synchronous permanent magnet electric motor rated for 109 horsepower and 210 pound-feet of torque. Like most electrics, the motor sends power to the front wheels via a single-speed constant ratio transmission.

A 96-cell, 27-kilowatt-hour lithium-ion polymer battery feeds the motor. It resides under the floor, and reduces rear seat legroom from 39.1 to 36.0 inches. The standard 120-volt charger, which stows under the cargo floor, takes a bigger bite out of luggage capacity, down 5.1 cubic feet to 19.1.

Kia enhanced the Soul's structure to accommodate the battery's weight, claiming a 5.9 percent increase in torsional rigidity, as well as a slight center of gravity reduction.

Just how much the battery adds to the Soul's curb weight, was not revealed, but Kia's 0-to-60 mph forecast of fewer than 12 seconds, some three to four seconds slower than gasoline versions, suggests that weight is substantial.

Initial rollout for the new electric will be limited to showrooms in California, Oregon, New York, New Jersey, and Maryland.