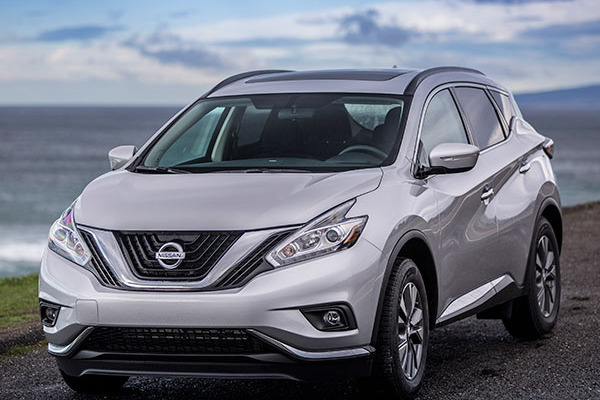 Completely redesigned for 2015, Nissan Murano gets a futuristic update inside out, from sheet metal to seats, resulting in bolder looks and a more upscale cabin.

When exterior designers at Nissan’s California studio set out to recreate the Murano, they wanted it to look like a spaceship. At least, that’s what one designer told us, recalling his impressions upon seeing the first-generation midsize crossover more than a decade ago. And while the Murano might not be ready for intergalactic travel, it succeeds at looking like nothing else on the road.

The 2015 Nissan Murano midsize crossover sport-utility seats five, with plenty of passenger and cargo space. Though it’s not a luxury crossover, the redesigned 2015 Murano looks more upscale than many of its competitors. This is especially true on the inside, where the cabin has been redesigned with higher quality materials and more modern finishes. Seats now use Nissan’s zero gravity technology, which offers a high level of support and bolstering. A new instrument cluster and the latest version of the NissanConnect interface also appear on the new Murano, as well as a new touchscreen display for cars equipped with navigation.

Cargo space is improved over the previous generation (pre-2015). The 2015 Murano offers 39.6 cubic feet of cargo space with all seats in place, which Nissan claims is the roomiest in its class. Rear seats fold easily and completely flat (not many do that), using either a pull-tab accessed from the second row, or using handles in the trunk. With the second row down, the Murano can hold up to 69.9 cubic feet of cargo.

Although housed in a brand new shell, the Murano’s powertrain carries over from the last generation. The 3.5-liter V6 makes 260 horsepower and 240 pound-feet of torque and is paired with a continuously variable transmission (CVT). Power is adequate for everyday driving, though we found the CVT lags a bit when we need an instant response.

As before, the Murano is available in both front-wheel-drive and all-wheel-drive variants.

Fuel economy ratings for the 2015 Nissan Murano are quite good for the class, at 21/28 mpg City/Highway for both FWD and AWD models (a 20-percent improvement over the outgoing model, according to Nissan). That’s in part due to a 146-pound weight reduction over the last generation, as well as additional aerodynamic enhancements. The 2015 Murano achieves a drag coefficient of 0.31, which is quite low for a crossover vehicle, and as Nissan loves to point out, is the same as a Porsche 911 Turbo. Low rolling-resistance tires and an underbody cover also help the Murano slip through the air more easily.

Though it’s not the most capable performer when it comes to driving dynamics, the 2015 Murano is a good choice for those who want something that looks modern with a comfortable ride and a tasteful, roomy interior, without the price tag of a luxury brand. Competitors include other midsize crossovers like the Ford Edge (which has also been redesigned for 2015), Toyota Venza, Volkswagen Touareg and even the Lexus RX, which starts at about the same price as the top-of-the-line Murano Platinum trim.

The 2015 Nissan Murano comes with a single powertrain in four trim levels: S, SV, SL and Platinum. Prices below are for front-wheel-drive vehicles. All-wheel-drive is available on all trims for an additional $1,600.

Murano SV ($32,620) gets a leather-wrapped steering wheel and power adjustable front seats plus navigation with 8-inch color touchscreen display, USB port, HD radio, foglights and roof rails. (All prices are MSRP, can change at any time without notice, and do not include destination charge.)

The exterior design, penned by Nissan’s U.S. studio near San Diego, CA, is gutsier than that of its predecessors, with bold, unusual lines, deep creases and aggressive angles. Designers said they wanted to give the Murano a thorough update while keeping the same futuristic spaceship look of the original. The front end wears an exaggerated, V-shaped front grille, reminiscent of Nissan’s smaller Rogue, but wider and more stylized. Sharply angled headlights with boomerang-shaped running lights flow upward into the Murano’s accentuated shoulders.

The side view is equally bold, with a sharp flowing character line that flows high above the front wheel arches and into the passenger door, then continuing straight above the door handles into the high-profile, three-dimensional tail lights. The greenhouse, or window area, is highly unique, with blacked-out C and D pillars that create an all-glass look. Back windows are framed by aggressive flowing lines that create an almost pinched shape. When we asked our space-loving designer what this was design cue was called, he didn’t have an answer. So we’ve dubbed it the Nissan Kink.

In back, the rear window glass sharply slopes beneath the roof spoiler, creating what designers call a floating roof. High, wide rear wheel arches flow into the rear bumper. Tail lamps echo the boomerang shape of the front headlights. Dual exhaust pipes are integrated into the rear bumper, giving it a planted, symmetrical look.

Contrasted with its flashier exterior, the interior of the Murano is more conservative and subdued. Notably, interior materials and finishes look tasteful and upscale, with clever modern touches. Wood trim found on previous versions of the Murano is gone, replaced with more contemporary pearlescent or titanium-look accents. Clear Lucite encases the shift knob and other areas of the vehicle on one particular interior color scheme, which makes the cabin look airy and bright without being too bling-y.

Central to the cabin design is the center screen, which is framed by a deep U-shape. In cars equipped with navigation, a new 8-inch touchscreen allows users to swipe, pinch and touch, similar to a smartphone or iPad. The large screen is easy to use and doesn’t require too many steps to get where you want to go. Though, we miss the rotary knobs used by other car companies for certain features, such as zooming in and out of the map view. While it’s easy to touch small icons when stopped, we find our fingers aren’t as precise when riding shotgun around country roads or over rougher surfaces. Knobs and buttons for audio and climate controls are well-placed, easy to reach and intuitive.

A new instrument cluster in the Murano features two analog gauges, with a white-on-black color scheme that looks clean and is easy to read. Between the gauges is a new digital color display, which shows a variety of entertainment and vehicle information. Drivers can easily scroll through screens with the push of a button on the steering wheel. 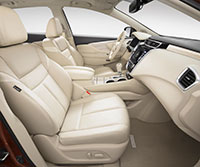 We found the seats very comfortable. The leather on Murano SL and Murano Platinum is soft, and while not buttery like the cowhide found in more expensive luxury cars, it wasn’t hard and waxy like others in the price range. Cloth upholstery comes standard on Murano S and Murano SV.

Murano seats use Nissan’s latest Zero Gravity design, with a unique construction that helps to reduce fatigue and make the driver and front passenger feel nestled in their own respective cocoons. While we enjoyed the extra support on our low back, another journalist complained the seats were too heavily bolstered. If you like a high level of support, these seats are a good choice.

Front-seat storage is adequate, with two cupholders and a small covered compartment in the center console, and a wide center armrest that offers additional space. Side door pockets, however, are relatively narrow and can only fit a small water bottle. Even then, the angle of the cupholder pitches the bottle forward, making it suitable only for bottles with tightly fitting lids.

Rear seats are comfortable and offer a reasonable amount of support. There’s enough headroom and legroom for adults of practically any size, though the Murano’s 38.7 inches of rear legroom falls a couple of inches short compared to both the Ford Edge and the Toyota Venza. All three rear seats have their own headrests, which might be comfortable for backseat passengers, but unfortunately also cuts down on the driver’s rearward visibility.

Cargo space is much improved in the 2015 Murano, measuring 39.6 cubic feet with the rear seats in place. That’s about on par with the Ford Edge, and slightly more than the Toyota Venza. With the rear seats folded flat, the Murano can hold 69.9 cubic feet. Rear seats fold easily, using either a pull-tab accessed from the second row, or using handles in the trunk. Platinum trims get a power-return feature, which automatically raises the rear seats back up with the touch of a button.

With its 3.5-liter V6, the Nissan Murano has ample power for most driving situations. The engine, which carries over from the previous generation, makes 260 horsepower and 240 pound-feet of torque, which is plenty for a midsize crossover, provided it’s not loaded to the gills. The Murano has a tow rating of 1,500 pounds, though we’d say it’s more suited to an evening on the town than a schlep to the campground.

What keeps the Murano from being a top performer is its continuously variable transmission (CVT), and although Nissan’s CVT is better than some, it still has that characteristic elastic-y feel, causing the Murano to lag a bit behind when we needed instant response. The tradeoff, of course, is that CVTs are generally efficient when it comes to fuel economy, and helps the new Murano achieve what Nissan claims is a 20 percent improvement in mpg ratings.

Part of that fuel savings is also due to reduced weight, as the new Murano sheds 146 pounds compared with the outgoing model. That lighter curb weight also translates to a more nimble feeling on the road, which we experienced both in slow-speed, tight turns and fast, sweeping turns. Thanks also in part to the Murano’s low-rolling-resistance tires and aerodynamic enhancements, the Murano is rated at 21/28 mpg City/Highway for both FWD and AWD models. That’s a big win over the V6-equipped Toyota Venza and Lexus RX 350 AWD vehicles with their respective ratings of 18/25 mpg and 18/26 mpg City/Highway.

Ride quality is on the firmer side, especially compared to softer-tuned crossovers like the Lexus RX, but we found the Murano comfortable and compliant. Only a well-worn road littered with deep ruts and fallen twigs unsettled us, and even then it wasn’t unreasonably rough. Otherwise, our AWD Murano SL felt smooth and secure while traveling highways and rural roads alike during a rare but welcome California rainstorm.

The electric-assist steering is comfortable around town and on the highways and is responsive, but not particularly communicative. Brakes are firm and confident, but not overly touchy. While some brands are moving toward adjustable driving modes that tweak steering, throttle and suspension, the Murano keeps one static setup, so you can take it or leave it.

Cabin and road noise has been reduced in the new Murano, in part due to a new windshield made of acoustic glass. Even in the pouring rain, conversations in the cabin were easy to hear, with little noticeable wind or road noise. Though, we did notice loud, distinctive thumps in the wheel on one winter-worn road as we kicked up scattered acorns and sticks.

With its unique design, tasteful interior and admirable fuel economy, the 2015 Nissan Murano is a good choice for those who want a comfortable, upscale midsize crossover without price tag of a luxury vehicle.

Laura Burstein filed this report to NewCarTestDrive.com after her test drive of the Nissan Murano in and around California’s Napa Valley.