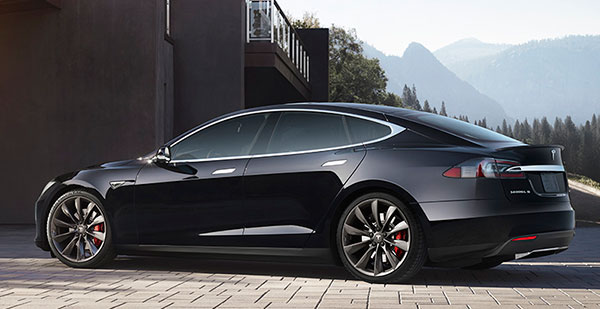 Tesla bills its Model S as the world’s first premium sedan designed and built from the ground up as an electric vehicle and touts its electric powertrain as delivering both unprecedented battery range and performance. With its rigid body structure, nearly 50/50 weight distribution and a very low center of gravity, it offers surprising responsiveness and agility (despite its very heavy battery weight) along with luxury smooth ride.

Thanks to slick aerodynamics and energy-dense battery technology, it offers two (big) battery sizes and more driving range than any other production electric vehicle. Tesla claims up to 208 miles of range for its $69,900 60 model with 60 kWh of on-board energy and 285 miles for its $79,900 Model S 85D with 85 kWh (compared to 24 kWh for the Nissan Leaf, for example). And with instantaneous electric motor torque, the former can whisper from rest to 60 mph in 5.9 seconds, the latter in 5.4 sec.

New for 2015 are the all-wheel-drive Dual Motor 85D and a high-performance P85D variant, both with electric motors at both axles that independently apply (and digitally control) torque to both front and rear wheels for what Tesla touts as precisely controlled performance and unparalleled traction in all conditions. And by precisely splitting the delivery of electric current from the battery to each motor, Tesla adds, the Model S 85D actually gains five miles of highway range vs. its rear-motor counterpart.

The $104,500 P85D Model S, optimized for ultimate performance, can deliver 100 percent of both motors’ peak torque from a standing start. As a result, it can whoosh from 0 to 60 mph in a stunning 3.2 seconds, which makes it, Tesla says, the quickest four-door production sedan ever made.