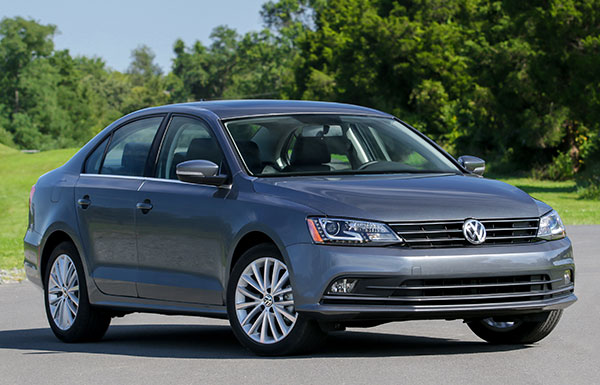 For 2015, Volkswagen Jetta is updated with redesigned styling, an improved interior, retooled features and a new version of the TDI clean diesel engine. The 2015 Jetta is a compact four-door sedan with front-wheel drive.

The 2015 refresh of the sixth-generation Jetta includes a redesigned front end with a new bumper, wider lower air intake, new foglights. Up-level models get new LED daytime running lights. In the rear, the 2015 Jetta gets a new trunk lid, taillights and bumper. Aerodynamics are also improved, making the Jetta slip through the air more easily.

Inside, the 2015 Volkswagen Jetta gets a few upscale tweaks, including redesigned gauges and chrome accents around the dash and instrument panel. Still, the Jetta retains a clean, minimalist look that is functional and intuitive, although perhaps not emotionally stirring. Seats fit most drivers well, and the standard cloth upholstery is on par for the segment, while optional leatherette upholstery (standard on more expensive trims) is comfortable and could pass for real leather. New interior upholstery and finishes also debut, as well as updated equipment packages.

The revised 2.0-liter turbocharged four-cylinder TDI clean diesel engine offers an increase in fuel efficiency over the previous version (by 4 mpg). The direct-injected powerplant makes 150 horsepower and 236 pound-feet of torque, the latter on tap from as low as 1,750 rpm. EPA fuel economy estimates for the Jetta TDI are 31/46 mpg City/Highway, with the manual transmission and 31/45 mpg with the 6-speed dual clutch automatic. We found the engine smooth and capable, without too much noise, in both manual and DSG variants.

The Jetta Hybrid also continues for 2015, but in a single, fully loaded trim level, powered by a 1.4-liter turbocharged 4-cylinder gasoline engine, paired with a 27-hp electric motor. Unlike many hybrids, the Jetta starts up on pure electricity and can run solely on the battery at speeds of up to 37 mph, according to Volkswagen (which, as with all cars, is heavily dependent on driving style). The combination of the gas engine and electric motor yields a total of 170 hp and a maximum of 184 lb.-ft. of torque.

In a 340-mile drive of the 2014 Jetta Hybrid, we got 35.0 miles per gallon combined driving, well below the EPA fuel economy rating of 42/48 mpg. Even for those who can achieve EPA numbers, we don’t think the fuel savings is significant enough to merit a price premium of more than $4,000 over a similarly equipped TDI model. The Jetta Hybrid also requires Premium gasoline and has a smaller trunk to make room for the battery pack. For all these reasons, we’d rather take the Jetta TDI.

In any form, the Jetta is comfortable to drive, with well-placed armrests, user-friendly cupholders, good door pockets and plenty of headroom. Our only complaint would be the optional navigation system, which is small and looks antiquated compared to others on the market. Considering sister company Audi does such a good job with their in-car technology, we’re surprised some of that hasn’t trickled down to Volkswagen. Other controls are perfectly fine, including the gauges, climate and radio.

Competitors to the 2015 Volkswagen Jetta include other compact sedans like the Chevrolet Cruze (which is also available in a diesel variant), Ford Focus, Honda Civic, Hyundai Elantra, Kia Forte, Mazda 3 and Toyota Corolla.

Jetta SEL ($25,925) comes with the 1.8-liter turbocharged engine and the 6-speed automatic transmission only. It has everything on the SE plus dual-zone automatic climate control, two-tone sport seats, full-power driver seat and an 8-speaker Fender premium sound system with subwoofer.

The refresh of the sixth-generation Jetta includes a redesigned front and rear ends. From head-on, the most apparent change is the wider, more prominent lower air intake, which ditches the old scoop design and now extends nearly the entire width of the car. New foglights also debut (on models so equipped), as well as new accent lighting around the headlamps. The 2015 Jetta is also more aerodynamic than before, helping with efficiency.

Still, the design remains simple and minimalist, with crisp lines and subtle curves, without the drastically sharp creases and aggressive sculpting employed by many other car companies. The Jetta is one of the largest in the compact segment, about four inches longer than the Honda Civic, and slightly longer than the Chevrolet Cruze and Toyota Corolla. Because of this, it feels more like a midsize car.

In the rear, the 2015 Jetta gets a new trunk lid, taillights and bumper. Certain models come with a rear spoiler, like the SE Sport and Hybrid models.

The GLI has a stronger, sportier stance. The front grille and lower air intake use a honeycomb mesh design, sportier front and rear fascias and side skirts, as well as larger, unique alloy wheels.

As before, the Jetta interior is clean, stylish, comfortable, accommodating, and functional. Bright chrome trim around air vents, gauges, dash and instrument panel give the 2015 Jetta a more upscale look.

The Jetta also gets a new tunnel design instrument cluster, which looks sportier and more visually interesting than the old design. It keeps the white-on-black color scheme, which looks good and is easy to read. The standard driver information display is big and easy to read, located neatly between the tachometer and speedometer, giving quick access to fuel mileage, range, odometer and temperature information.

Even with hard plastics around the center console and doors, the Jetta interior feels better than the Honda Civic, although is might not be as rich as the Ford Focus, Chevy Cruze or Hyundai Elantra. The standard cloth seats are comfortable, and Volkswagen’s V-Tex leatherette upholstery seems durable, and could pass for real leather. 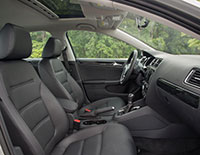 Seats have a relatively wide range of adjustability; moreso with the power seats found on upper trim levels. Short to moderate drives are fine, though after about five hours in the saddle on a sometimes choppy freeway, backs and rear ends might start to get tired, especially in the sport seats.

The Jetta makes excellent use of space. There’s good headroom front and rear, and rear-seat legroom is first in class at 38.1 inches, as much as the BMW 7 Series. With the rear armrest down, there’s a pair of cupholders for the rear passengers, to relax with a drink as they stretch their legs out. Small creature comforts help to make the cabin livable, including comfortable door-side armrests, convenient cupholders, good door pockets and grab handles.

The center stack design depends on the trim level. On our TDI SE test car with connectivity, a mix of touchscreen options and hard buttons around the screen make most functions easy to access. Though, we didn’t love the Jetta’s touchscreen display, which seems small and antiquated compared to some.

We also found the navigation system frustrating to use at times; entering destination information manually felt clunky, and the voice recognition didn’t always work properly. We also found the navigation system’s female voice harsh and grating. We did appreciate the USB connectivity and Bluetooth audio streaming, which, along with VW’s Car-Net interface, allowed us to play songs from our iPhone and Pandora app. The base audio system isn’t anything special. The upgraded Fender audio system sounds much better.

Trunk space measures 15.7 cubic feet in all sedan variants, with a 60-40-split folding rear seat. Models equipped with the rear seat pass-through offer even more flexibility. The Jetta Hybrid trunk measures only 11.9 cubic feet, because the battery pack rides over the rear axle.

Each of the engines in the 2015 Volkswagen Jetta has a different set of characteristics. Because VW’s turbocharged powerplants are so good, the base models with their 2.0-liter naturally aspirated engines can comparatively feel about as sporty as a tractor. The most basic variants comes only with the 5-speed manual transmission, which has long throws and feels numb, and the lack of torque in the 2.0-liter engine means you have to downshift a lot.

Jettas powered by the 1.8-liter turbocharged engine offer adequate power for commuting and driving around town or on the freeway. We like it especially with the 6-speed automatic transmission, which has a sport mode that’s sharp and effective. It shifts smoothly, both on steep hills and in slow-and-go freeway traffic, a situation where many transmissions will constantly shift up and down. Manual mode can be used for spirited driving, shifting at the lever. It’s programmed well, and doesn’t keep over-ruling the driver.

The GLI’s 2.0-liter turbocharged four-cylinder is understandably more fun, with its 210 hp and 201 lb-ft. of torque, which is available as low 1700 rpm. It does 0 to 60 in 6.8 seconds with the satisfying DSG 6-speed auto-manual transmission, and there’s plenty of smooth power at high speeds. The 6-speed manual transmission in the GLI is a pleasure, but the DSG automated manual is the best of its kind, with sharp shifts in auto or manual mode, although in the GLI we found that it surged a bit around town. Well-placed steering-wheel paddles come with the DSG. They’re very tidy and effective, more like tabs than paddles.

Our favorite powertrain is the Jetta TDI with DSG transmission. The 2.0-liter turbocharged direct-injection diesel engine makes 150 hp and an impressive 236 lb-ft of torque. It’s not the fastest of the bunch, but is plenty able, with plenty of thrust in the low RPMs. The DSG transmission shifts smoothly for a dual-clutch, with gearing that isn’t too wipmy, nor too aggressive. Although it’s a diesel, the rumble and vibration typically found with these cars is barely perceptible. The TDI is also highly efficient, with an EPA fuel economy rating of 31/46 mpg City/Highway with the manual, and 31/45 mpg with the DSG.

All Jetta models benefit from a multi-link rear suspension, which in 2014 replaced the old torsion beam setup. The change makes the Jetta feel more composed, especially over rough road and around corners. The sport-tuned suspension on the SE Sport and GLI models, is, as expected, firmer, but isn’t uncomfortable. Still, we found quite a bit of road noise on rough asphalt.

The Hybrid is the most expensive of the Jetta lineup, and in our opinion isn’t worth the huge price premium. It’s EPA rated at 42/48 mpg City/Highway, but we only got 35.0 mpg on a 340-mile test drive in a 2014 model, half casual city and half freeway at 72 mph. It also requires premium fuel, while the others run on regular or diesel. Because of its regenerative braking system, it drives differently than the other Jettas, with the brakes feeling grabby at slow speeds.

The Volkswagen Jetta offers solid driving dynamics, a roomy cabin and a variety of engines to suit many tastes. The TDI is the most fun and efficient for the money.

Laura Burstein filed this NewCarTestDrive report after her drive of the Volkswagen Jetta in Virginia.