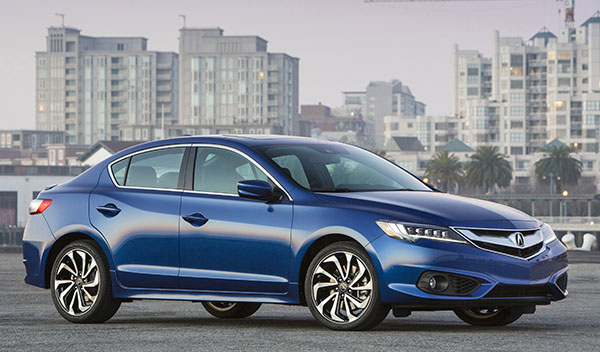 The Acura ILX gets a significant makeover for 2016. One of a handful of compact sedans in the growing entry-level luxury segment, the 2016 ILX benefits from a new high-performance engine, a new 8-speed transmission, retuned suspension and steering, a reinforced chassis, fresh styling, an upgraded interior, and updated technology.

All 2016 Acura ILX models come with Honda’s 2.4-liter direct-injected four-cylinder engine, good for 210 horsepower and 180 pound-feet of torque. The transmission is an 8-speed dual-clutch transmission (DCT) with a torque converter, borrowed from Acura’s midsize TLX.

The gearbox is significant, because it’s the first application to pair a dual-clutch transmission, which usually operates on its own like an automatic, with a torque converter, used historically with automatic transmissions. What this means for the driver is smoother shifts off the line and at lower speeds, unlike standalone DCTs, whose shifts can feel abrupt. We put the transmission to the test on demanding roads, and found it capable and smooth, especially in Sport mode. In fact, we found it one of the most significant improvements compared to the outgoing model.

Inside, design and materials are greatly improved for 2016, with soft-touch materials and sporty touches like contrast stitching on the steering wheel. The A-Spec package gets a black interior with suede-like seat inserts, as well as aluminum pedals.

New in-car technology for 2016 includes a tethered navigation system for the mid-level ILX Premium, which allows users to pipe navigation information from their smartphone to the car’s display via an Acura-specific navigation app. A new optional suite of safety features, dubbed AcuraWatch, includes adaptive cruise control, a multi-view rear camera, lane keep assist, collision mitigation and a road departure mitigation feature, which will actively steer the car back onto the road in case the driver drifts.

Another significant improvement to the 2016 Acura ILX is the steering, which feels much more responsive compared with the previous model. Steering feel is comfortable, without feeling numb or overly heavy. The ILX suspension has also been revised, and additional reinforcements around the ILX chassis makes it stiffer, which equates to improved collision safety and less body roll around turns.

Road and wind noise is reduced on the 2016 ILX thanks to thicker window glass and more sound dampening, as well as active noise cancellation, which picks up engine and road sounds from a microphone and pipes in noise-combating frequencies through the car’s speakers. Though improved from the outgoing model, we still noticed some mild to moderate road noise on bumpier roads, especially with the A-Spec model’s larger tires.

The 2016 Acura ILX is a comfortable, capable compact sedan, with a lower starting price than those of its competitors, which include the Audi A3 sedan and the Mercedes-Benz CLA, as well as the two-door BMW 2 Series. While the ILX may lack the performance and brand cachet of its German rivals, it’s much improved over the previous model and offers good value.

ILX Technology Plus ($32,900) includes the Acura Watch Plus features and adds built-in navigation with real-time traffic, an enhanced rearview camera and an upgraded 10-speaker audio system.

The hybrid model and other previous engine and transmission choices are no longer available. (All prices are MSRP and do not include destination charge.)

Although it shares underpinnings with the affordable Honda Civic, the Acura ILX has a look all its own. The body of the 2016 ILX stays basically the same, but updates to the front and rear ends give it a more modern look compared to the 2013-2015 models.

In back, new LED tail lamps give the ILX a sleeker look, and the new rear bumper uses the same contoured shapes of the front end’s lower air intakes.

A-Spec models get fog lights, side rocker panels, a rear decklid spoiler and a unique design for its 18-inch wheels.

As before, the cabin of the 2016 Acura ILX is refined and well laid out, with a distinct Acura flavor. Like some of the exterior design cues, the inside of the ILX is strongly reminiscent of the larger TSX sedan. While the ILX interior certainly doesn’t look German, it’s tasteful and accessible, and those who eschew stark interior designs might prefer it over the Bauhaus-style Audi A3 or the comparatively spartan Mercedes-Benz CLA. 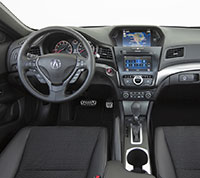 ILX comes standard with a single 5-inch display screen at the top of the center stack with manual knobs and buttons below. Premium trims and above get a new, dual-screen setup on the instrument panel with an upper 8-inch display screen and a lower touch screen. Screens are easy to read, and although the 2016 touch screen interface has been improved over the previous version, it’s not quite as intuitive as others.

Built-in navigation comes standard on cars equipped with the Technology Package. On Premium trims, users with iOS and Android-powered smartphones can download Acura’s proprietary navigation app, which can display directions right on the car’s built-in screen when the phone is tethered to the car via Bluetooth or USB. 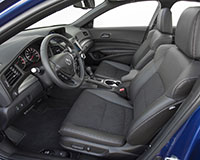 Front seats look better than the Mercedes-Benz CLA’s one-piece design and are moderately supportive, though less so than those in a BMW 2 Series. We would have liked more side bolstering while driving the ILX around twisty turns, but drivers who don’t put the ILX through these kinds of paces won’t likely feel this way. Generally, seating is comfortable and adjustable enough to fit a wide range of body types and physical dimensions.

Rear seats will fit two average-sized adults comfortably. Rear headroom is 35.9 inches, slightly more than the Mercedes-Benz CLA but about a half-inch less than the Audi A3. Although the ILX is rated for five people, the hump in the rear center seat, typical on many cars, makes it suitable only for smaller adults or children who are old enough to ride without a car seat. Rear legroom is 34.0 inches, much more than the CLS’s 27.1 inches, but about an inch shy of the Audi A3.

Cargo space measures 12.3 cubic feet, about the same as the Audi A3 sedan, but slightly less than the Mercedes-Benz CLA or the BMW 2 Series.

The 2016 Acura ILX is comfortable to drive. It’s by no means a sports car, nor is it advertised as one. On the other hand, it isn’t boring, either. It’s luxurious enough for daily driving, yet peppy enough for a spirited Sunday jaunt.

Honda’s 2.4-liter direct-injected inline-4 engine, used exclusively in all ILX models, produces plenty of pickup with its 210 horsepower and 180 pound-feet of torque. Acceleration is smooth and linear, and we had no problems merging onto highways or passing when we needed to.

We especially like the gearbox, an 8-speed dual-clutch transmission with torque converter, which produces the quick shifts characteristic of a DCT without the jerkiness.

The ILX is equipped with a Sport mode, which changes the shift points to maximize performance. Unlike some manufacturers’ sport modes, however, it does not change steering feel, throttle mapping or suspension settings. Such gimmicks aren’t really needed on a tame sedan like the ILX, though, and we found the transmission particularly shines in this setting. In Sport, the ILX holds gears longer and downshifts perfectly when decelerating, providing some extra oomph. Although the gearbox could get a bit busy with the shifts around downhill turns, shifts were always smooth, not abrupt.

Steering on the ILX is greatly improved. This was especially evident after a spin in the outgoing model, whose steering seemed dead and unresponsive in comparison, and didn’t handle the twisty roads as precisely. Still, the ILX isn’t the best choice for canyon carving, and doesn’t have the dialed-in feel of a BMW or Audi. It’s nose-heavy, which makes it a better choice for cruising and commuting rather than tackling demanding roads. The ILX has a weight distribution of a whopping 63/37 front/rear, compared with the near-50/50 balance of the BMW 2 Series or the 58/42 split of the Audi A3.

Other improvements to the 2016 Acura ILX include additional bracing to the chassis, which we noticed provided more stability and less body roll in comparison to the old model. Brake rotors are larger on the 2016 ILX than before, which results in smooth, confident stopping.

The 2016 ILX is quieter than before, thanks to thicker window glass and more sound dampening, as well as active noise cancellation, which picks up engine and road sounds from a microphone and pipes in noise-combating frequencies through the car’s speakers. Though improved from the outgoing model, we still noticed some mild to moderate road noise on bumpier roads, especially with the A-Spec model’s larger tires.

A suite of new optional safety features for 2016, dubbed AcuraWatch, includes adaptive cruise control, includes adaptive cruise control, lane keeping assist, road departure mitigation (more aggressive than lane keeping assist, which will steer the car back into the lane if the driver drifts off the road) and collision mitigation with automatic braking, which will stop the car if it senses a collision is imminent. The sensitivity of these systems is fixed and not adjustable like those used by some car companies. Still, we found they were more helpful than annoying, and the lane departure feature gently guided us back into our lane when cruising in a straight line on the highway, yet didn’t fight us when we were driving around twisting mountain roads.

Fuel economy for the 2016 Acura ILX is an EPA-estimated 25/36/29 mpg City/Highway/Combined for all models, an improvement over both outgoing gasoline ILX models, and especially admirable considering the 2016 ILX is about 100 pounds heavier. As with all vehicles, however, real-world fuel economy varies depending on mode and driving style. Jaunting through the hills above Napa Valley, we pushed the ILX around twists and turns for about three hours, mostly in Sport mode, where our fuel economy hovered around the 20 mpg mark.

The 2016 Acura ILX is a comfortable, entry-level luxury car with even-tempered driving dynamics, a relatively roomy cabin and a competitive price point.

Laura Burstein filed this report to NewCarTestDrive.com after her test drive of the Acura ILX near Napa Valley, California.