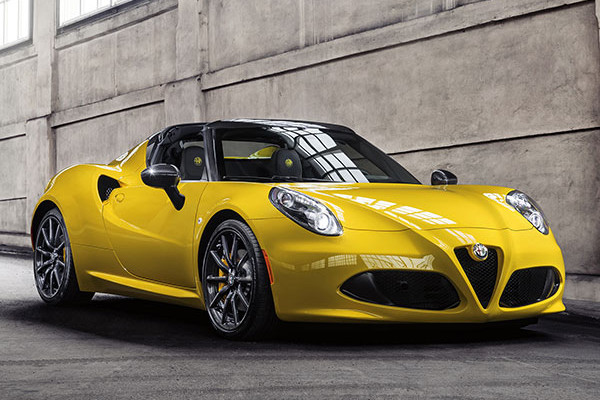 If the Alfa Romeo 4C coupe comes close to sports car purity, the 4C Spider nails it. When the 2015 Alfa Romeo 4C Spider goes on sale this summer, we fully expect it to deliver the decisive dynamics that distinguish its hardtop counterpart as well as its sexy good looks, with the addition of discretionary open air motoring.

Spiders and other open cars have long been Alfa staples. The company’s corporate history predates World War I, going back to 1910, when Anonima Lombarda Fabbrica Automobili (A.L.F.A.) was established in Milan, Italy.

In the decades that followed, Alfa distinguished itself in racing more than most, and many of those racers were either roadsters or single-seat grand prix cars. Motorsports passion has been a key element of the Alfa Romeo persona ever since, and that tradition continues in the Alfa 4C Spider.

During Alfa Romeo’s early days a sports car was defined as a roadster, devoid of elements not directly involved in making it go, and capable of being raced pretty much as-is. No extras.

Automobiles have obviously become far more sophisticated since those early no-frills days. We take civilization for granted; bare bones is unacceptable. Nevertheless, among contemporary automobiles calling themselves sports cars, it can be argued that none come closer to the classic definition than this one. 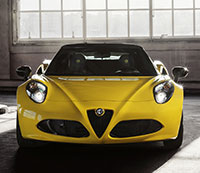 No one was surprised when the Spider was unveiled as a concept car at the 2014 Geneva auto show. It was the logical next chapter. And it’s no surprise the Alfa Romeo 4C Spider sustains all the attributes of the 4C coupe, with the exception of a fixed roof. The same 1750 cc turbo four-cylinder engine (237 horsepower, 258 pound-feet of torque). The same 6-speed dual clutch automatic transmission, capable of lightning (130-millisecond) shifts. The same surgically precise steering, quick at 2.7 turns lock to lock, with no power assist.

The only major distinction is the removable carbon fiber roof panel. Okay, with the panel off, the Spider looks more like a targa than a roadster, but so what? The effect is the same. And the equipment includes a canvas top, handier to stow than the carbon fiber panel and useful for occasions when a pleasant day of motoring turns nasty.

Compromises? Almost none. Removing the roof from a unibody structure can reduce chassis rigidity to something resembling pasta. But thanks to the 4C’s carbon fiber body shell, that doesn’t seem to be an issue here, at least according to Alfa. The Spider gets a carbon fiber windshield surround, but that’s just about the only change from the coupe. 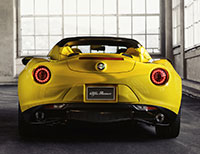 Converting a coupe to a convertible can also lead to increased mass, as the engineers try to restore lost rigidity. And in fact the Spider is heavier than the coupe: but only by 22 pounds, 2337 versus 2325. Thus the power-to-weight factor is essentially the same, and owners can expect the Spider to match the coupe’s 4.1-second 0-to-60 sprint.

Other distinctions are equally subtle. The Spider is fractionally taller than the coupe: 46.7 inches vs.46.6, but its static ride height is closer to mother Earth: 4.4 inches vs. 4.5.

With or without a hard top, the 4C is one of those rare cars that become an eager extension of the driver’s will, adding a wind-in-hair and sun-in-face option to the exhilaration. Think of it as a Ferrari experience at a fraction of the cost.

Cost, of course, is something that won’t be nailed down until this summer, when the 4C Spider reaches the 100 or so dealers carrying Alfa Romeos. MSRPs for the 4C Coupe run from about $55,000 to almost $70,000 for one equipped with all the available extras. Expect Spider pricing to run higher.