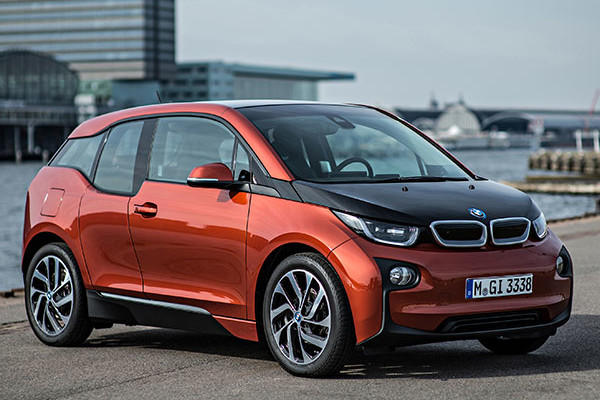 For three years now, the BMW i3, a five-door hatchback, has been the most energy-efficient car sold in the U.S. Its technology is a couple jumps ahead, with a totally electric powertrain and unique carbon-fiber reinforced plastic shell.

An optional setup adds a two-cylinder motorcycle-based engine with a two-gallon fuel tank, which about doubles its approximate 75 miles of range. But the weight of this add-on makes acceleration performance slower and cuts a few miles out of the all-electric range. It’s called REx, for Range Extender.

The funky i3 sells well, as many as 1000 cars per month. But if it weren’t for the twin-kidney badge on the nose, you’d never know it was a BMW. It’s designed to be a city car. Think New York, San Francisco, Boston, as well as Amsterdam, Jakarta, and even Tokyo, in the midst of all the domestic Japanese competition.

In that urban role, the BMW i3 is genius. It made our drive in chaotic rush-hour traffic free of stress; in fact, the i3 was downright soothing. And out on the open road it’s fine, just don’t expect it to handle and ride like a BMW sedan.

That claim of most energy-efficient comes from the BMW i3’s EPA rating of 124 MPGe, or Miles Per Gallon Equivalent, measuring the distance a car can travel on the same amount of energy that’s in a gallon of gasoline.

The electric motor pushes the BMW i3 up to speed swiftly and smoothly. The electric motor generates 125 kilowatts (equivalent to 170 horsepower, 184 pound-feet of torque), with a liquid-cooled 22-kilowatt-hour lithium-ion battery mounted in the cargo floor.

The optional booster engine is a 650cc twin making 34 horsepower (25 kilowatts) and 40 pound-feet of torque, driving a generator that charges the battery. The optional package is mounted in the cargo floor next to the battery.

The regenerative braking the BMW i3 generates is exceptional, so strong you don’t even have to use the brake pedal to slow down, only to come to a complete stop. Back off the accelerator pedal, and the electric motor resists forward motion by the car, while charging up the battery. We found it easy to get used to. Drivers might like it, and some find it a fun driving game to play.

BMW’s home charging station is rated at 7.4 kilowatts, more than any other plug-in car save the Tesla Model S. It can charge the battery from flat to 80 percent in less than 4 hours. An optional Combined Charging System (CCS) uses a quick-charge port, but good luck finding a public charging station that uses that system. There are only a few.

The i3 offers most of the electronic safety features found in luxury cars. Due to its low sales volume, the BMW i3 has not been crash-tested by the government.

The BMW i3 ($43,400) comes with the DC fast-charging station, heated front seats, and satellite radio. The BMW i3 REx includes the two-cylinder engine that doubles the range ($46,250).

The BMW i3 looks more muscular than other hatchbacks the same size. It has presence, with a wide stance, 19-inch wheels, and upright posture. The mock grille on the snub nose is blacked out and ringed in Frozen Blue, as BMW calls the color, with Frozen Blue trim on the doors that big chunky handles.

Every i3 has a glossy black hood, roof, and rear deck that’s not attractive, a jumble of lines and curves and mix of materials. The darkened glass of the rear hatch hides U-shaped taillamps. The body is wider than liftgate, making the i3 look like it has tailfins.

It looks better from the other three angles: side, front, and front corner. There’s a deep dip on the side, making the rear windows look taller. The line turns upward to a smaller window in the rear pillar, meeting a dip from the roofline. Meanwhile the narrow tires that come on 19-inch wheels make the i3 look like it wants to be a lowrider when it grows up.

The cabin is modern, calm, minimalist, and expansive in front. It feels like a loft, with as much space inside as a 3 Series sedan, according to BMW. And like a loft, it’s cramped in the back, but the front seats are excellent.

Inside, the BMW i3 feels like Scandinavian furnishing, simple and sometimes elegant, with tight textures light or dark, including gray, cream, or earth-tones, with contrasting stitching. Parts of the dash and the interior panels are made of a renewable fiber called kenaf, which is mottled and looks unfinished. There are the inevitable black plastic bits, but they don’t stick out.

The i3 Mega World comes with recycled SensaTec upholstery, and the instrument panel is from what BMW calls grain foil. In the Giga World, both upholstery and instrument panel come in active-climate wool and olive-leaf-tanned leather, in earth-tones, trimmed by open-pore eucalyptus. If Tera is to the 12th power of things, it doesn’t make it. Tera World is almost the same as Giga World but dark brown.

There’s a small information screen behind the steering wheel. The main display screen is 10.2 inches, rising over a useful bin on the dashboard and showing bright and crisp graphics. Its functions are operated by the iDrive knob on the console. In addition to road conditions, you can get other transportation information, for example bus and train schedules, as well as walking routes. Directions on how not to use your $50,000 car.

There isn’t too much wind noise at speed, which is the loudest noise you get in an electric car. The motor whines a bit under full acceleration, but the sound is otherwise suppressed.

The BMW i3 is best for zipping around, as the acceleration time from 0 to 35 mph is just 3.5 seconds. Acceleration from a standing start is smooth and quick, as in all electric cars, but not as quick as some. The i3 without the gas engine will go from 0 to 60 mph in 7.0 seconds, while the heavier REx model takes 7.8 seconds. BMW claims a top speed of 93 mph; we got ours up to 83 mph and backed off with the needle still climbing.

The battery juice is gobbled up at higher speeds, so the REx would seem like the call for an i3 that’s driven on the freeway. You could drive across country with the REx, without ever having to stop for an electric charge, although it would take about 40 fuel stops.

On the highway, the ride is controlled but firm, probably because of the stiff sidewalls in those 19-inch tires, and it’s sensitive to crosswind. Handling around corners is nimble and crisp, and the tight turning radius of 32.3 feet makes i3 a blast in the city. When driven hard, the front tires squeal around sharp turns, while the back end jitters and skips on turns with rough pavement.

Besides the normal mode, there are Eco Pro and Eco Pro+ modes, which increase range by about 12 and 25 percent, says BMW. If you’re in one of those modes and floor it, they will be over-ridden, so you’re never stuck suddenly needing acceleration and not having it (when merging into fast traffic, for example). You can also change modes and keep up with traffic. Much of the power saving in Eco Pro+ mode comes from a reduction in heating or air conditioning.

Regenerative braking happens as soon as you back off the power pedal, so the car doesn’t coast. This can be a problem, because coasting is the key to smooth driving, being a gradual transition of speed. BMW says there is a some gliding programmed into the software, and the display confirms it, but we couldn’t feel it. Once, going down the ramp of a parking garage, we backed off and the car came to a complete stop without our touching the brake. When you re-learn how to drive, using just one pedal, you might think it works well.

Smooth and sophisticated, the BMW i3 may be the best electric car you can buy, but it’s expensive.