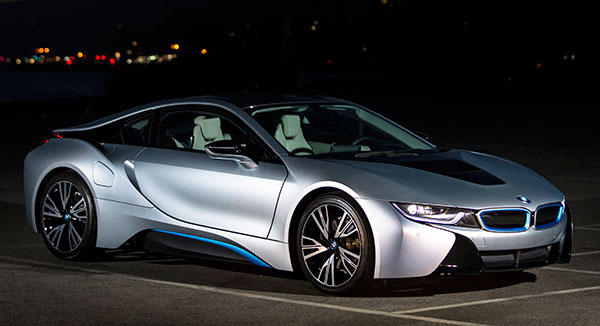 Crowds that gather around the BMW i8 are easily awed by the gullwing doors, but it’s the wizardry in the powertrain that should be dropping their jaws. The BMW i8 is a stunning supercar-looking coupe that gets some of its power from a cord. More comes out of the gas pump, with a turbocharged 1.5-liter three-cylinder gas engine driving the rear wheels.

The i8 is unique. It’s been on a mission, for the three years it’s been around. BMW’s statement with the i8 is that energy efficiency and high performance can mix just fine.

The BMW i8 is three cars. Around town it’s an electric car, calm, quiet, smooth; on a road trip it’s a seamless hybrid; on country roads it’s a fast sports car.

The i8 can run on the electric motor at the front wheels up to 75 mph, the turbo engine at the rear wheels, or both at the same time for all-wheel drive. It easily alternates. Sport mode makes it real. BMW says 357 horsepower worth of real, with a zero-to-sixty time of 4.2 seconds.

Only the Porsche 918 Spyder, which costs eight times as much as the BMW i8, uses this type of hybrid powertrain, called through the road: The rear wheels are powered by the 1.5-liter turbocharged three-cylinder gas engine, making 228 horsepower and 236 pound-feet of torque, mated to a 6-speed automatic gearbox. Meanwhile, up front, a 96-kilowatt (130 hp) electric motor drives 184 pound-feet of torque into the front wheels through a two-speed transmission. Its spin is supplied by a liquid-cooled 5-kw lithium-ion battery pack, mounted in the tunnel between the front passengers.

The body and chassis structure is ambitious like the powertrain, using a carbon-fiber reinforced plastic (CFRP) body shell on a crash-absorbing aluminum chassis.

The EPA rates the i8’s total combined range at 330 miles, using a full tank of gas for the hot little turbocharged motor and all the juice in the batteries. In all-electric mode, the EPA rates the i8 at 76 MPGe, or miles per gallon equivalent. It’s the distance a car can travel on the energy in a gallon of gas. By comparison, the i3 hatchback gets 124 MPGe.

With a bit of science and arithmetic, it comes down to this: When you run on both the gas engine and battery-powered motor in the i8, you’ll get about 28 miles per gallon. Not great for a hybrid, but pretty good for a sports car.

For 2016, BMW brings out the world’s first laser headlights, not standard but available. The standard headlamps are LED, suddenly no longer state of the art. The laser lamps are amazing.

Compared against the Audi R8 or Porsche 911, the BMW i8 hybrid cannot run anywhere near them, at least not after about 5 seconds. But it gets better fuel economy and generates lower emissions.

The i8 starts out as a low wedgy fastback with a short nose, but then you open the doors and it turns into a raptor. The wing doors swing up and stand suspended, as if the i8 is poised to swoop from the sky and snatch a rat for lunch.

The lines are horizontal, and the wrap is tight around aero-driven 20-inch wheels. From the rear wheelwells back, a slab rises to a tall aerodynamic tail. The i8’s coefficient of drag is 0.26, not quite as low as that of the Tesla Model S. Aero is critical with an electric car, because above 30 mph, it takes more energy to overcome drag than it does to roll the car.

The nose features a blacked-out BMW twin-kidney grille, with eye-catching, sharply contrasting, good-looking bright blue (Frozen Blue) trim. The door sills and other bits are gloss black, a feature lost on a black i8, thus changing the lines. The waistline is an actual groove that runs all the way to the rear fenders. Small fins run from the roof rail to the far edge of the deck lid, which curls over them like a tube wave over a surfer. It’s the i8’s signature.

Surprisingly, the i8 sports car’s interior is more predictable and less avant-garde than that of the i3 hatchback. Inside, the i8 is more like a traditional BMW. The leather seats in our i8 mixed black and ivory, while matte-silver trim highlighted the character lines of the dash. Soft-touch plastics on the dashboard and other places provide a premium feel. But it’s not all plastic. There’s also reclaimed wood veneer and recycled fiber fabric.

The front seats are low, with a floating instrument pod in front of the driver, and a tall tunnel for the battery pack between the front seats. The seats feel comfortable enough, but we didn’t get to take a road trip in the i8, and that’s the test, especially in a car like this.

Those cool blue lines on the outside extend to the inside, and come out in blue LED ambient lighting that looks especially good with the optional bright blue seat belts.

Let’s start slowly, in the Max e-Mode setting while using the battery. It’ll go 75 mph using all-electric front-wheel drive. The regenerative braking is quite strong ion this mode: It slows the car down so much, you almost don’t have to use the brake pedal.

Now we’ve gone 15 miles (a lot less if we went 75 mph), and we’re done, dry, no more battery juice. Our car shifts itself into the default Comfort mode, and fires up the 1.5-liter turbo motor. We stir up some battery juice with revs, so we switch into Sport. The motor and engine are separately powering the front and rear wheels. We floor it, and that word BOOST appears on the dash and triggers a grin. Zero to sixty in 4.2 seconds, indeed.

Sport mode radically changes the car’s attitude. The instruments glow red, a digital tachometer replaces the power meter, and all the performance software gets aggressive. At 75 mph, the two-speed transmission driving the electric motor shifts into high gear, providing torque up to 135 mph.

Programming these systems can’t be easy, managing and balancing the input from all the sensors. With all that shifting of power and dynamics, virtually perpetual, it seems amazing when the handling comes out neutral, as it does in the i8.

We drove the i8 aggressively on some twisting canyon roads above Los Angeles. Granted, a Lamborghini, Ferrari, or McLaren would leave the i8 in the dust. Still, the i8 fared well. The electric power steering is precise, providing decent (simulated) feedback in the steering wheel. In Sport mode, the ride remained compliant, twitching a bit only in rough pavement on hard corners.

The i8 sports car works, so BMW has accomplished its mission. If this is what you want, there are no other options.