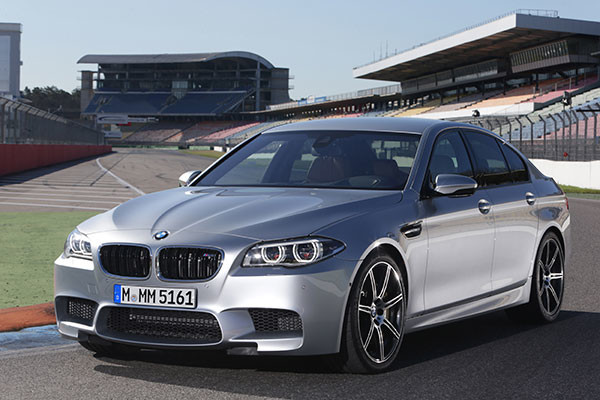 If you slice your butter with a chainsaw, you would have liked the hardcore original BMW M5 from the 1980s. The M5 used to be king of the sports sedan, but new contenders fight for the crown today, as the chainsaw has gotten civilized. It was last redesigned for 2012 and hasn’t changed much since then. It’s heavy and stuffed with technology. It would rather be on the street than the track.

The rear-wheel-drive M5 uses BMW’s multi-tasking twin-turbocharged 4.4-liter V8 making 560 horsepower and 500 pound-feet of torque. The gearbox is either a 6-speed manual or 7-speed dual-clutch automatic. It zooms from zero to sixty 4.1 seconds.

The EPA gives the M5 a slim 14 miles per gallon City, 20 Highway, and 16 Combined with the 7-speed twin-clutch transmission, 1 more mpg with the manual. An all-wheel-drive M5 exists in Europe, so might find its way here.

The BMW 5 Series line gets five stars in crash-worthiness from the NHTSA, and a Good rating from IIHS in every test but small overlap frontal, where it gets Marginal. But one thing to always consider is how likely you are to get in a crash in the first place, with a car this responsive and with such solid electronic stability control.

The M5 doesn’t shout high performance. Sitting upright with big windows, it could almost pass for a regular 5 Series. It has a deeper chin and more aggressive front fascia, and at the rear there are four chrome pipes sticking out under the bumper, but it doesn’t shout. What mostly gives it away are the 19-inch alloy wheels and fat ZR-rated tires, surrounding big blue calipers you can see between the spokes of the wheels. You can see more of the calipers through the spokes of available 20-inch wheels. The M5 comes in a few exclusive colors, such as Monte Carlo Blue or Sakhir Orange.

If you want to feel racy, the cabin of the M5 will disappoint you. It doesn’t feel that much different from a 5 Series sedan. It’s not laid out like a cockpit, instead there’s a long low dash that stretches and bends at its edges to make it about space. There’s not enough seat bolstering for spirited driving, unless you get the Executive package with active bolstering.

A wide center console hides much of the electronic controls. Some gauges and displays are slightly angled toward the driver. The iDrive dial on the center console controls almost everything, including BMW’s online suite of remote apps. A big 10.2-inch high-rez screen shows many things, including 3-D map, real-time traffic; audio and media playback with 20 GB for music files.

The M5 doesn’t have as much room in the rear as some competitors. Two adults are okay, even though there’s space for a third passenger, save that middle rear seat for those you don’t like.

You might not have trouble getting people to go for a ride with you, when you boast you’re packing 560 horsepower and 500 foot-pounds of torque (but then again, depends on who you ask).

From behind the wheel, the M5 won’t be mistaken for a lightweight, despite its quick acceleration of zero to sixty in 4.1 seconds (4.3 with the 6-speed manual gearbox). You feel its 4500 pounds. We got some seat time on the track, and even though it’s the same length, width, and weight as the M6, it feels bigger and heavier. Both cars are 193 inches long and 74.4 inches wide.

Some good news is that when it’s time to slow down, the massive brake rotors, 16.1 inches front and 15.6 inches rear, are up to the task.

The 7-speed dual-clutch transmission is easier on the street and quicker on the track, but we like the 6-speed manual with automatic blipping during downshifts. It’s our preference simply because we like to play, despite the fact that the throws are long. So we can’t suggest that it’s better, for any good reason.

The active rear differential electronically monitors traction and slide, something the regular 5 Series cars don’t have. But you have to be really driving it hard, to exceed the limit of grip in this heavy car. But it’s nice to know that it will save you from a sideways slide, if you do.

Given its imperfections at the expense of gentrification, and high cost, we think there are too many contenders in the high-performance luxury car sports sedan field, to suggest the M5 is the one to buy.

Driving impressions by The Car Connection. Sam Moses contributed to this report.