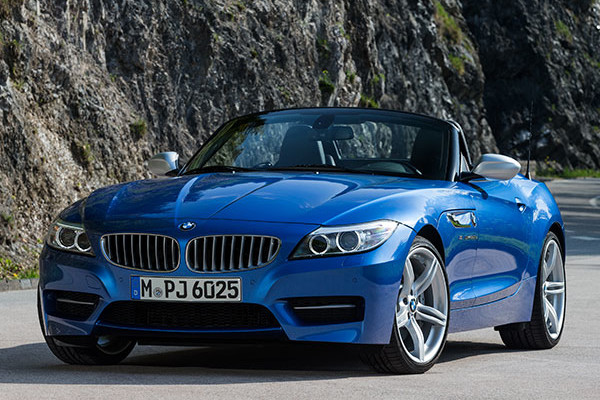 The BMW Z4 is more stylish cruiser than high-performance sports car, heavier and less athletic than the redesigned Porsche Boxster. It’s a rear-wheel-drive roadster with retractable hardtop roof: quick, pleasant and civilized. It’s built for looks and comfort as much as speed. With its hottest engine it can do zero to sixty in 4.8 seconds, which is very quick by anyone’s stopwatch.

The Z4 competes with the Boxster, Corvette, Jaguar F-Type, and Mercedes SLK. The Z4 was redesigned for 2009 and received significant changes for 2012, but there haven’t been many updates since then.

The base 28i comes with either a 6-speed manual gearbox or 8-speed automatic, while the six-cylinder models come with a 7-speed DCT, or dual clutch transmission.

The weight of the Z4 hits fuel mileage, although the 28i rates a decent 22/34 miles per gallon City/Highway, for 26 mpg Combined. The 35is, with 95 more horsepower, sucks gas, rating just 20 mpg Combined.

With its long, long hood and short tail, the Z4’s shape might be called classic. Converging arcs, smooth swells, and raised character lines blend to make it a striking design. 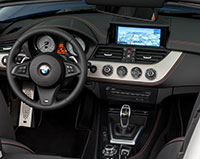 Fortunately, the cabin departs from the design of BMW sedans, although it’s not exactly spartan and precise, like classic sports cars once were.

The cabin is sophisticated and upscale, with high quality trim, although the supportive sporty seats are synthetic leather, not the real stuff. The centerstack is somewhat cluttered, but the iDrive control is clean enough.

As with any two-seat roadster, there’s not exactly room to spare inside.

The retractable hardtop tucks away neatly, and is so well insulated that the Z4 is nearly as quiet as a coupe inside.

The 240-horsepower engine makes 260 foot-pounds of torque; the 300 hp engine makes 300 pound-feet; and the 335 hp engine makes 332. The base engine can reach 60 mph in 5.5 seconds, which might be the most efficient performance. The 3.0-liter six-cylinder in mild tune can get there in 5.1 seconds, and that difference in acceleration is quite noticeable in every gear. The jump to 4.8 seconds with the 335-horsepower version was less evident to the seat of our pants.

The suspension is designed and tuned to be smooth, so the ride is comfortable. It’s a bit soft for the track, although the cornering is stable and fairly well balanced.

If you want sportier handling, there is the M Sport Package (standard on the sDrive35is). It makes the cornering confident, quick, and direct, as the adaptive dampers do much of the work for you. This package includes 18-inch alloy wheels with grippy run-flat tires, which make the ride less comfortable. But it’s all a tradeoff, you just have to decide what you want most.

In the sDrive28is, the standard 6-speed manual gearbox is slick and easy, great for those who like to shift. The available 8-speed automatic is quick and smooth, although it steals some spirit from the car.

The sDrive35i and 35is come with a paddle-shifting 7-speed dual-clutch transmission that is the best of both worlds. It’s quick, but can’t match the racy crispness of the Porsche Boxster’s dual clutch.

The BMW Z4 is a stylish sports car, more about good looks than high performance. The available 335-horsepower engine delivers strong performance, but the Z4 is no Porsche. Now seven years old, this is a dated product.