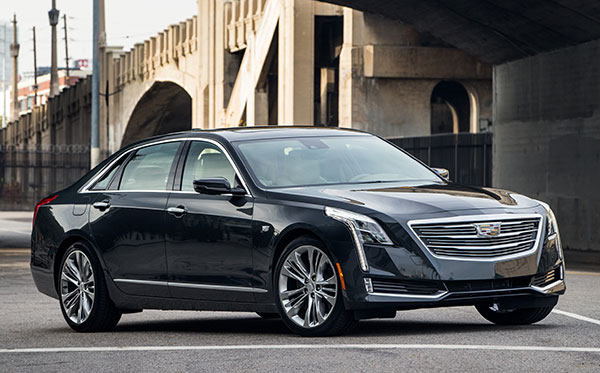 CT6 is the latest flag-carrier for Cadillac, an all-new car conceived, like other recent Cadillac four-doors, to challenge the Teutonic trio-Audi, BMW, Mercedes-Benz-that dominates the luxury sedan market.

It is not unreasonable to say that two earlier offerings, CTS and ATS, measure up to that objective quite well. And the CT6 does the same-but more so.

Although it rolls onto the scene as the biggest of current Caddy sedans, it is in no way reminiscent of the opulent behemoths of the brand’s glory days in the 1950s and ’60s. The dimensions of the new Cadillac CT6 slot between those of the mid-size German sedans-Audi A6, BMW 5-series, Mercedes-Benz E-Class-and the Fatherland’s top offerings: Audi A8, BMW 7-series, and Mercedes S-Class.

While this may not create quite the kind of curbside presence as the lordliest of the Deutsch dreadnoughts, the dimensions embrace an interior with plenty of room, front and rear, thanks to a long wheelbase.

Beyond its contribution to ride quality, the long wheelbase yields athletic proportions-not a lot of car extending beyond the front and rear axles. That’s particularly true up front, where the long hood culminates in a very short front overhang. Proportions have been the key to BMW passenger car design success for decades, particularly for the 3 Series, and the CT6 gets high marks in this respect, with an appealingly athletic look.

As you’d expect of a car in this category, the CT6 is chock-a-block with infotainment and connectivity features, standard and optional, as well as quality materials and handsome decor. Nothing is overdone, every surface says quality. No flash, all class.

The foundations are low in mass and high in rigidity, 16 percent higher in torsional stiffness than the CTS, according to Cadillac. The structure involves a new architecture, developed with painstaking attention to minimizing weight. There are no exotic materials like carbon fiber or Kevlar in the technical details, but aluminum has been employed extensively, yielding curb weights that range from 3657 to 4085 pounds, depending on equipment and trim level.

Lighter always adds up favorably on the performance side of the ledger, in handling and of course in what happens when the driver stabs the throttle. There are three possible engines that can be summoned by that throttle: a turbocharged 2.0-liter four-cylinder (265 horsepower, 295 pound-feet of torque); a naturally aspirated 3.6-liter V6 (335 hp, 284 lb-ft); and a twin-turbo 3.0-liter V-6 (404 hp, 400 lb-ft).

All three engines are paired with a new 8-speed automatic transmission. The 2.0-liter is rear-wheel drive, while V6 models are all-wheel drive.

Like other cars in the prestige classes, the CT6’s athleticism is wrapped in elegantly simple sheetmetal-there are subtle character lines, and of course the front end treatment, with its unique cascades of vertically stacked LED running lights and familiar egg crate grille, leave no doubt about brand identity. The design team has seen fit to remove the wreath that has surrounded the front end badge for so many decades, but the badge itself is a big one, readily identifiable from a long distance.

Exterior brightwork is tastefully restrained-the LED head and running lights are the car’s primary jewelry-although some of the wheels are offered with bright finish. Diameters range from 18 to 20 inches, with tire sizes 235/50-18, 245/45-19, and 245/40-20.

The design team has also taken care to make sure that the wheels fill up the wheel wells, enhancing the car’s athletic good looks. 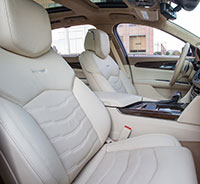 In addition to supple leather, attractive needlework, and tasteful color combinations-all elements you’d expect in a top-of-the-line luxury sedan-the CT6 offers several interior features that stand out even in this hedonistic automotive arena.

For example, there’s a camera integrated with the inside rear view mirror that increases rearward vision 300 percent, according to Cadillac-although it takes some getting used to, and can be switched off.

There’s a triggered video recording function, that can monitor and store up to 32 hours of your driving.

A new night vision system includes pedestrian and animal detection, and is integrated with an automatic braking function.

There are three audio systems, all by Bose, with eight speakers (base), 10 speakers, and the new premium Panaray option with 34 speakers. The performance of the Bose Panaray system is something that almost defies description-think Carnegie Hall and New York Philharmonic on wheels.

If there’s any element that could be enhanced it’s the front bucket seats-all-day comfortable, but the thigh and torso bolsters could be more supportive for the kind of driving inspired by the 3.0 twin turbo.

We had a chance to experience two of the three CT6 powertrains in a day of driving dry mountain roads east of San Diego-in two of the three operating modes (Touring and Sport)-and headed home impressed with the new car’s combination of willing responses, supple ride quality, fade-free brakes, and accurate steering.

Thanks to relatively low curb weight, acceleration and passing punch are respectable with the 2.0-liter turbo, though not exactly breathtaking. The 8-speed automatic is all but seamless in its upshifts-just the right amount of step sensation-although kick-downs could be a little quicker. The paddle shifters provide better response.

As you’d expect, the twin-turbo V6 provides a livelier experience. Besides getting from A to B in a bigger hurry, the active rear axle (part of the Active Chassis system), which provides rear steering, allows higher cornering speeds and is a confidence enhancer. The chassis engineers have tuned Cadillac’s magnetic ride control-an auto-adjusting damping system that’s as good as anything on the planet-for a just-right balance between smooth ride and prompt answers to demands from the driver. The system keeps cornering attitudes commendably level, and if the CT6 becomes a little reluctant to turn as cornering speeds increase-read: understeer-the threshold for that reluctance is high.

In addition to its substantial thrust, the new twin-turbo V6 features cylinder deactivation, shutting down half the cylinders in freeway cruising-a first for a turbocharged engine-as well as a stop-start feature.

Bottom line: the CT6 3.0 is a fast car with dynamics that inspire driver confidence, as well as occupant comfort. At a minimum it holds its own versus its Euro rivals, and in some ways-e.g. ride quality-can be perceived as holding an edge. We can’t wait to see the hot rod V version.

The only measurable area where Cadillac lags its European rivals is in end-of-lease residual values. That gap has been closing, and it’s reasonable to expect that the CT6 will close it even more. Aside from that this car enjoys parity in almost every respect with its German benchmarks, particularly in the areas that count most-driver reward, handsome interior appointments, understated elegance, painstaking fit and finish. Does it have the kind of cachet that goes with one of the German autobahnmeisters? That’s an intangible. But when you hand over your CT6 to a valet parker at Chez Robespierre, it’s a good bet that Caddy will wind up in the display row up front.