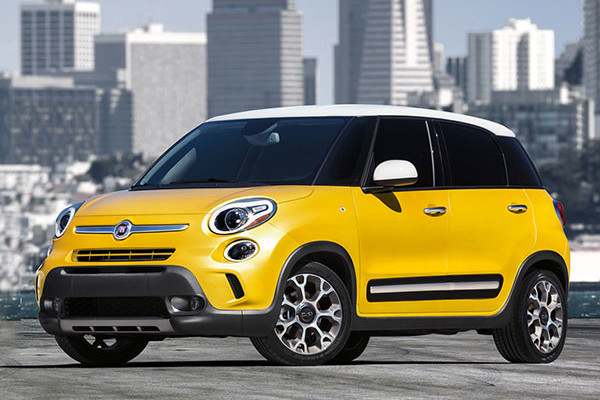 The Fiat 500L is a tall compact car, with the Kia Soul, Honda Fit, and Mini Countryman as its competitors. Beyond the name, it shares very little with the regular Fiat 500 or the 500X crossover. Definitely not spirit. The 500L is 27.7 inches longer and 6 inches wider than the 500 we know and love. They should call it the Fiat 500 Fat. With model names like Pop, Easy, Trekking and Lounge, why not. Fat tells the story of the car just as well.

It runs about how it looks. Even though its standard engine is the regular 500’s hottest, a turbocharged 1.4-liter making 160 horsepower and 184 pound-feet of torque, the 500L is slower than the regular 500 with its base engine that only makes 101 horsepower. That’s because of the heft that the 500L carries. The front-wheel-drive 500L uses one of three transmissions: 6-speed dual-clutch, 6-speed manual, or a new 6-speed automatic.

Gas mileage could be better, for such a small engine. EPA gives it 24 miles per gallon City, 33 mpg Highway, 27 mpg Combined with the dual-clutch transmission, and 25/33/28 mpg City/Highway/Combined with the 6-speed manual. The new 6-speed automatic, which we like the most, gets the worst mileage, at 22/30/25 mpg. Meanwhile, the Honda Fit gets 36 mpg. And we can’t think of anything the 500L can do that the Fit can’t, except speak Italian.

The feds at NHTSA haven’t crash-tested the 500L. With seven standard airbags and active headrests, the Insurance people at IIHS rate it a Top Safety Pick but not Top Safety Pick+. If a rearview camera were standard, instead of optional, would it have gotten the top rating from IIHS?

There are other trim levels, called Collections, that bundle options.

The 500L looks awkward while missing a few targets. It’s got the nose of a bulldog, ungainly tiered headlamps, a horizontal three-piece grille, and zigzagging roofline like the Mini. We think the squat and playful stance works, but the details bedevil it.

The cabin is less playful, thank you. A lot of big knobs and a small 5.0-inch screen. Limited storage space, with two small gloveboxes split by a shallow tray, and door pockets; that’s about it. The base Pop doesn’t even have a center console, although upward models add it.

The 500L seats aren’t very comfortable, with hard bottom cushions rounded at the front, like European seat, to make the pedals easier to reach. Americans like longer front seats for more support under the thigh.

The second row is better, where there’s adequate legroom and elevated seats. The bottom cushion is just as firm, but the seatbacks recline; on some models they also slide and tumble for carrying cargo. Nothing like the Honda Fit’s Magic Seat, but they’re trying. There is a panel in the cargo floor with rails for storage on two levels.

Overall visibility is great, and sunlight breaks into the cabin through the available double-pane small sunroof. Also available is upgraded infotainment with 6.5-inch screen, an SD card slot, text-message read back, and navigation that’s not worth it. The nav screen is small and the maps difficult to read. Some smartphones are better than some in-car navigation systems, and that’s the case here.

The 500L uses a front strut suspension with twist-beams in rear, getting the most out of the conventional design by using Koni shock absorbers specially tuned the keep harsh bumps out of the cabin. It does the job better than the Mini Countryman, and almost as good as the Kia Soul.

It’s quite stable at highway speeds, and the steering is fluid, although the steering wheel is tilted somewhat like a bus, that’s a Fiat thing. We found it hard to see the gauges from the steering-wheel position that wasn’t so flat.

The dual-clutch transmission isn’t impressive, with slow and purposeful shifts (like its cousin the Dodge Dart); not only that, there is no manual control, let alone a sport mode. The 6-speed manual gearbox is better, but the clutch pedal is cramped, at least for a size 12 shoe like we wear. Hill Start Assist is standard, but with fumbling feet you can run out of time. We liked the 6-speed automatic transmission best, for its shift quality.

Don’t buy it just because you like the Fiat 500 but need more space. Fiat built it for those people, but missed.