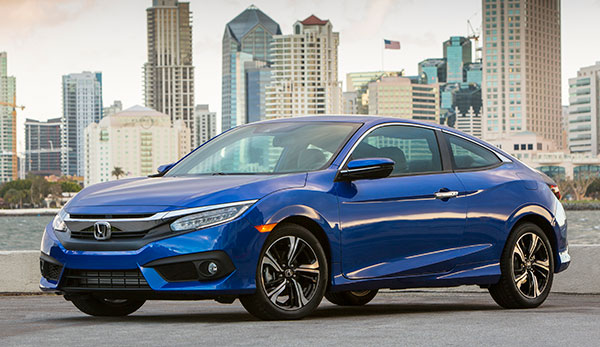 Just reaching showrooms, the new Honda Civic Coupe is the second chapter of a Civic renaissance that will embrace the most comprehensive lineup in the 43-year history of this Honda icon, with a five-door hatchback, a hybrid, and two performance versions, high (Si) and higher (R), still to come.

It will be a lineup that upstages every other make in the compact class, at least at the affordable end of the sprectrum. But the first question to consider in contemplating the Civic Coupe is: Why would I prefer a two-door to the greater utility of a sedan?

Most car buyers opt for four doors, which is why there aren’t very many compact coupes to choose from; three, in fact, unless you count the Volkswagen Beetle, which marches to its own beat.

But for some, four doors don’t project the right message. A sedan may be useful, but it’s not quite cool. For those who prioritize style and image above all, the new Civic coupe is loaded with both.

The sedan is certainly no wallflower, and represents a welcome departure from Honda’s usual caution with four-door designs. But the coupe’s styling is a little edgier, with more creases in its skin, a slightly wider stance, a tightly wrapped exterior treatment that looks more athletic.

The coupe shares the sedan’s engine choices: a 158-horsepower four-cylinder, available only in the basic L and LX models, and a 174-hp turbocharged 1.5-liter four. Both engines are new, and the turbo is a first for Hondas sold in the U.S. We will undoubtedly see other turbocharged engines as the Civic family continues to expand.

The base engine offers a choice between a 6-speed manual transmission (standard) and a continuously variable automatic (CVT). Turbo engines are allied with the CVT. Honda has done a lot of development work with the CVT, eliminating most of its undesirable slipping-clutch sensation. It will simulate traditional automatic transmission upshifts at full throttle, and is particularly effective in Sport mode.

Those engine-transmission combos will be in force through the 2016 model year; Honda plans to make a manual transmission available with the turbo later this year, with all models: coupes, sedans, and hatchbacks.

Like most new cars, the Civic’s list of standard and available safety features has expanded compared to the previous generation, and includes adaptive cruise control, forward collision alert with autonomous emergency braking, and lane departure warning with lane assist. That last, lane departure and lane assist, is particularly annoying. More on that later.

As noted, Honda will make a manual transmission available with the turbocharged engine in the fall, with 2017 models. (Prices are MSRP and do not include destination charge of $835.)

And even though the coupe is an inch shorter, its overhangs, the portions of the car that extend beyond the front and rear axles, have shrunk even more, by 1.4 inches front, 3.0 inches rear.

Compared to the new sedan, the coupe is 5.4 inches shorter, and almost an inch lower.

If the image objective is cool and athletic, the Civic has it covered. It’s lean, sexy, and ready to rock and roll.

Inside, the coupe has the same high quality materials that distinguish the sedan. That includes first rate bucket seats, and a rear seat actually habitable by adults. Though the new car is an inch shorter than the previous coupe, and substantially shorter than the sedan, Honda’s interior designers, long celebrated for creating space inside that seems physically impossible for a given set of exterior dimensions, have expanded rear seat legroom by 2.2 inches.

The stretched wheelbase is the key to this design legerdemain. Honda has also increased the coupe’s rear headroom, even though the roof is a smidge lower. This was achieved by lowering the seating positions slightly, and the car’s center of gravity along with them. Also, a new electric parking brake eliminates the traditional mechanism, recovering space in the center console area. All good.

And as you’d expect of any new car, the coupe’s connectivity and telematics have been enhanced, with the same infotainment features and options that made their debut with the sedan. The new nav system, in particular, is a big improvement on the previous generation, much easier to program, much more helpful with traffic problems and alternate routes.

On the downside, Honda’s love affair with touch screen secondary controls continues to border on obsessive, not a knob or switch to be seen. The volume slide control is particularly irritating, very difficult to be precise if the car is jiggling around at all, though the driver can alter volume via a little thumb switch on the steering wheel.

Like all of these systems, the Civic’s adaptive cruise leaves too big a gap to the car in front, even at the closest setting, allowing interlopers to cut in front. Turn it off to dissect traffic and the system’s radar is spring-loaded for panic, constantly flashing a BRAKE! warning on a screen below and between the major instruments. Fortunately, we never quite initiated the autonomous braking feature.

The lane departure/lane-keeping system flashes a warning when the car treads close to a center or edge line and the driver hasn’t signaled a lane change. Then it jiggles the wheel to nudge the car back to the path of true righteousness. The sensation is similar to that produced by a bad wheel bearing.

There is some comic relief. When the system gets to the wheel jiggling stage, another warning flashes in the instrument binnacle: STEERING REQUIRED! Oh, really?

Fortunately, this system can be turned off.

Our Civic Coupe experience is so far limited to models equipped with the 1.5-liter turbo. It delivers brisk acceleration: 60 mph comes up in about six and a half seconds, but the coupe’s real forte is agility; it feels even handier than the sedan. The sedan gets high marks for its solid structure, but the coupe takes chassis rigidity a step further, with selective stiffening around front and rear suspension mounting points, as well as slightly firmer suspension tuning.

The suspension components vary slightly across the various trim levels, but the bottom line overall is a coupe that’s quick on its feet, with eager responses to orders from the driver. Body motions are modest, even in hard cornering, and there’s absolutely no drama. It’s easy to be precise with this car in quick maneuvers, thanks to electric power steering that’s exceptionally quick (2.2 turns lock to lock), accurate, and tactile. And the steering wheel enhances the experience, with its just-right rim thickness and grippy feel.

There are limits to the coupe’s agility, of course. Like almost any front-drive car, the weight bias is decidedly forward, over the front wheels. And of course the front wheels are also putting power on the pavement. That’s the classic prescription for understeer: the faster the car is pushed into a corner, the more it wants to go straight.

The Civic coupe is no exception, but its understeer is progressive, and furnishes plenty of notice when the driver is exceeding its cornering limits. A more performance-oriented tire would probably raise the understeer threshold, like most new cars, Civics come with all-season rubber, and would probably shorten braking distances.

On the other hand, the brake system allows easy pressure modulation at the pedal, and is fade free, i.e., repeated hard stops won’t diminish performance.

On the comfort side of the scorecard, the slightly firmer suspension tuning doesn’t really have a negative effect on ride quality; it’s compliant enough to take the edge off edgy bumps and expansion joints. And Honda’s efforts with sound insulation pay off here, just as it does in the sedan. The new Civics raise the standard for quiet operation among compact cars.

Stylish, sophisticated, refined, comfortable and agile, the new Civic Coupe does everything well, and looks good doing it. There are compact coupes that offer significantly more performance, the BMW 2 Series, for example, but not in this price range. The BMW 2 coupes start about $10,000 north of where Civic Coupe pricing leaves off. Coupes may be about style and image. But a strong value proposition certainly sweetens the deal.

Tony Swan is, among other things, the founding editor of New Car Test Drive.