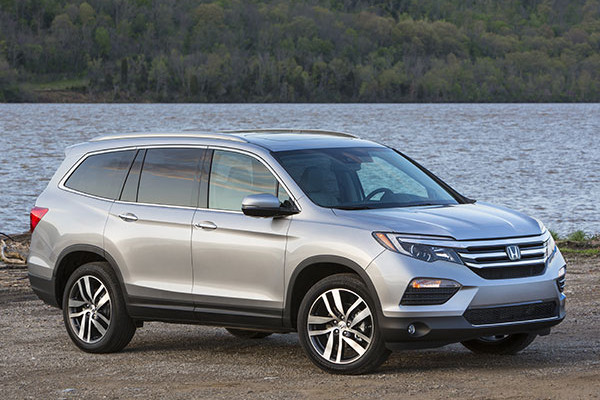 No longer square, the shape of the 2016 Honda Pilot is smooth and pretty. The new Honda Pilot is a bit longer, narrower and lower than the 2015 model. It’s also 300 pounds lighter, tipping the scales between 4,054 and 4,317 pounds, depending on trim level.

The 2016 Pilot has the same interior volume as before, with more space for frontal crash structure, third-row seating, and cargo. The new Honda Pilot is nearly as roomy as the Odyssey minivan. It seats eight. Fold the second and third rows and it becomes a serious cargo carrier. From the driver’s seat, it feels luxurious and refined.

The new Pilot pours on the latest features: safety, interior, infotainment, plush trim. It feels more like the upscale Acura MDX. The Honda has some features that are better than Ford Explorer, Nissan Pathfinder, Toyota Highlander, and Chevrolet Traverse.

The 2016 Honda Pilot comes with one engine, a 3.5-liter V6, that increases a bunch in horsepower and torque for 2016, to 280 hp and 262 lb-ft. It uses either a six-speed or nine-speed automatic transmission, depending on the model, and comes front-wheel drive or all-wheel drive.

Some models include a traction management system like on the Ford Explorer, Jeep Grand Cherokee, or Land Rover Discovery, along with 7.3 inches of ground clearance. A properly equipped Pilot is rated to tow up to 5000 pounds, though we’d spring for a stouter truck if we were pushing that limit on a regular basis.

The 2016 Honda Pilot LX with front-wheel drive retails for $29,995 and comes with fabric upholstery, Bluetooth with audio streaming and touchscreen audio. Pilot LX AWD has an MSRP of $31,795. (All prices are MSRP and do not include $880 destination charge. Dealer prices may vary.)

The Pilot EX adds equipment for $32,430, while a top-of-the line Pilot Elite with all-wheel drive, navigation and rear entertainment system retails for $46,420. Upgrades include DVD, satellite radio, and leather.

The 2016 Honda Pilot’s organic rounded shape has an elegance to it, more so than the square 2015 model. The new Pilot balances its glass to metal better than others that size. It’s sculpted without looking either dressy or too muscular.

The low front end and horizontal grille work well together, playing handsomely. From some points of view the Pilot looks like it was conceived by the mating of a Subaru Forester and Chrysler Pacifica. It also has styling in common with the Hyundai Santa Fe, Nissan Rogue and Chevy Traverse, while its rear end avoids the pitfalls of understyling on the Traverse.

Inside, the new Pilot is very well finished, with attention to detail everywhere. There are elements from the Honda Accord and touches from the CR-V. Styling details and soft-touch surfaces have transformed the Pilot, making it as luxurious as the Buick Enclave. For the Pilot EX-L and upper models, there’s an acoustic windshield to reduce noise. Pilot Touring and Pilot Elite models add acoustic glass on the front doors.

The three rows of seats have room for eight passengers. The front seats have an ideal shape with better bolsters and more support than previously for improved driver comfort. The driving position is not too high while delivering commanding visibility, and the step-in is fairly low. Our only complaint comes from where the dash joins the center console, there’s a wide seam where we wanted to support our knee.

The controls are thoughtfully located, with useful cubbies in front including a phone bin. We especially liked the steering-wheel controls for audio and phone. The console’s best feature is its deep bin that will hold an iPad or a small camera bag.

The second row is adult-friendly, a split-folding bench. The third row is reached (EX-L and above) by pressing a button that folds the second-row seat and slides it forward. It can hold two adults with decent head and leg room, making it actually useful, which is rare for that size of three-row vehicle. That makes the Pilot a great carpool vehicle, especially when the available panoramic roof opens the cabin to a flood of natural light.

New for 2016, Pilot offers a middle row with two seats and a pass-through. The seat has its own tray table and cupholders, and reclines for comfort on long trips.

Cargo space is abundant when the third row is folded flat, with nearly 56 cubic feet, and with both rows flat there’s 109 cubic feet. Even with the seats up there is 18.5 cubic feet, about as much as the trunk on an Acura RLX, and enough for an 82-quart cooler.

Pilot rides on an independent suspension. Its dual-path shocks dampen small bumps to a gentle thunk and round off the edges of potholes. The electric power steering is quick, and the turning circle is a fairly small 39.4 feet.

Pilot’s handling is beautifully composed, although it changes somewhat with wheels and tires on different models. We felt a difference between the 18-inch wheels and 20-inch wheels with all-season low-profile tires; the 18’s delivered tauter handling, despite the fact that it should have been the other way around. A Honda engineer suggested that might be from shock tuning on the pre-production model we drove.

The all-wheel-drive system is front-wheel-drive based, but can send up to 70 percent of the power to the rear wheels using hydraulic clutches. Stability in corners is enhanced by the car’s ability to apply the brakes to individual wheels, an impressive feat that no driver can perform.

The engine has a pure and lovely note when wound up toward redline. In Sport mode, it delivers energetic acceleration with either the 6-speed or the new 9-speed automatic transmission, although there’s some surging as it downshifts to a stop. We liked the 6-speed better, even though the 9-speed comes standard with paddle shifters and the 6-speed uses a lever. We felt the 9-speed hanging too long in gear, as the computer was trying to figure out what to do; and sometimes it chose a gear lower than we wanted.