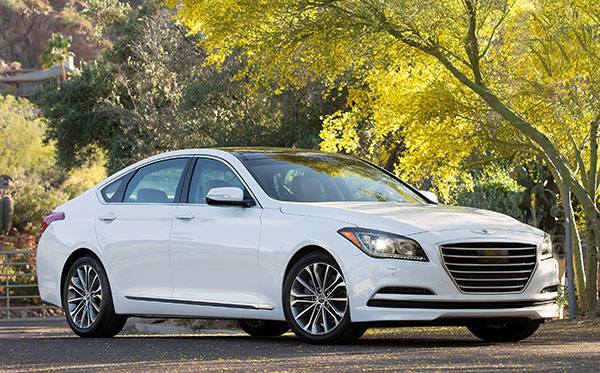 Hyundai Genesis offers just about everything you would expect in a world-class luxury car, if not the most prestigious badge. Perceptions aside, the Genesis has earned its place as a legitimate contender in the world-class luxury field.

The Genesis is now in its second generation, which was introduced as a 2015 model. It’s more prestigious and distinctive than its predecessor, designed to compete with the Mercedes-Benz E-Class, BMW 5 Series, and Cadillac CTS. The Genesis is loosely styled along the lines of those rivals, incorporating attractive elements of each. There are key differences, though, like the Genesis’s full-size footprint and sleek fastback profile.

Genesis continues into 2016 with minor equipment revisions only.

The Genesis features rear-wheel-drive architecture and comes standard with a 3.8-liter V6 good for 311 horsepower. The available 5-liter V8 delivers a massive boost to 420 horsepower. All-wheel drive is available with the V6 only. Both engines incorporate an 8-speed automatic transmission and selectable driving modes.

The Genesis starts out with a significant price advantage in this class, which becomes only more apparent as you add options. A fully equipped V8 Genesis is priced about the same as entry-level midsize sedans from the big luxury brands. While the Genesis doesn’t offer the same level of athleticism as those models, it’s obviously a lot of luxury sedan for the money.

Genesis 5.0 ($53,850) steps up to the V8 engine and all of the 3.8’s options as standard, plus enhanced interior trim and a driver-adjustable suspension system. (All prices are MSRP and do not include destination charge.)

The Genesis doesn’t wear a Hyundai badge, but gets its own winged logo that appears inside as well. This subtle rebranding makes sense; the Genesis bears a stronger resemblance to its luxury competitors than its own brothers. That’s not to say the Genesis suffers from a case of copycat styling. Its coupe-like roofline and gaping hexagonal grille provide plenty of distinction. The look is softer and more elegant in the back, if less eye-catching. The long hood with its pronounced power dome appears perfectly suited to housing a V8 engine.

The Genesis follows a clean and simple design theme inside. Shapes are mostly linear, but softened at the edges for an integrated look. The dashboard features a relatively flat face and strong horizontal orientation. Controls are neatly arrayed in the center stack and buttons are kept to a minimum, a welcome departure from the complex interfaces found on some luxury cars. Gauges are of the traditional analog type, which means they’re easy to read.

The Genesis also offers a color head-up display that shows vehicle speed as well as safety alerts and navigation prompts as needed. Safety warnings are also communicated through the steering wheel, which vibrates when a potential hazard is detected. The Genesis is the only Hyundai to offer this feature.

Interior fit and finish are fully up to the standards of the luxury brands. The combination of wood and aluminum trim looks high-class, but not glitzy. The Genesis feels large inside, with good visibility and plenty of wiggle room at the hips and elbows. Surprisingly, rear headroom doesn’t suffer a bit at the expense of styling. Adults can climb in and out of the back without contortions.

Trunk space, however, is only average at 15.3 cubic feet. That would be less of an issue if the rear seat folded down, but all you get is a narrow pass-through for long items.

The Genesis has been engineered with intense focus on passenger comfort. Ride quality is plush. Road and wind noise are almost non-existent. But that doesn’t mean the Genesis is a big softie. Movements are well-controlled, and the electric-assist steering system is surprisingly responsive. The V6 Genesis actually feels nimble around town, no doubt because it weighs 400 pounds less than the V8 model. The optional all-wheel drive system adds just 165 pounds, so there’s no adverse effect on handling.

Both engines are paired with a selectable driving mode system that tailors the car’s performance to four different settings: Eco, Normal, Sport, Snow. Whether in Normal or Sport mode, the transmission is quick to downshift, providing more than enough power when you need it. The air suspension on V8 models has its own modes (Normal and Sport) that deliver your choice of maximum cruising comfort or tauter handling.

Just keep in mind that the Genesis isn’t a sports sedan, and there are limits to what it can accomplish on twisty roads. As with other comfort-tuned cars, the brake pedal is on the soft side, and nosedive is pronounced during panic stops.

Despite its size, the Genesis moves out swiftly when you hit the accelerator. The 3.8 with all-wheel drive runs from zero to 60 mph in 6.6 seconds, while the V8-powered 5.0 does the sprint in a quick 5.3 seconds. The real advantage to the V8 is its hushed and silky operation, even under full throttle. Shift paddles are standard across the board for a greater control of transmission performance.

In terms of luxury and power, the rear-wheel-drive Genesis competes on equal footing with midsize, rear-wheel-drive luxury sedans from Europe and America. While it trails them in handling and overall performance, the Genesis responds with more interior room and thousands in savings, two things that matter a lot to buyers.

Driving impressions by The Car Connection.