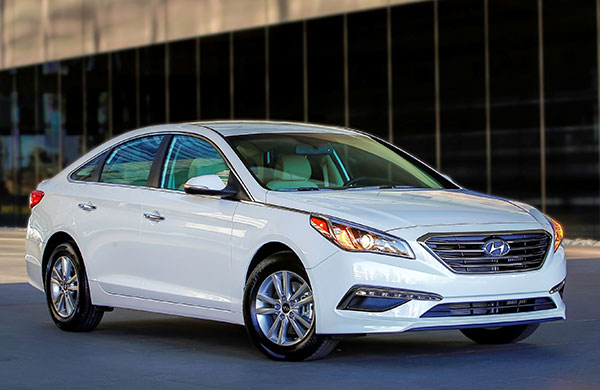 The Hyundai Sonata is spacious and fuel efficient, making it a worthy rival to America’s best-selling family sedans, from the Toyota Camry and Honda Accord to the Ford Fusion and Mazda 6. That’s a tough list of competitors.

Redesigned for 2015, the seventh-generation Sonata adopted more conservative looks and greater refinement. Flamboyant styling of the previous generation is replaced by a more subdued look inside and out.

Changes for the 2016 model year include the use of some aluminum suspension components, which should help both ride and handling. Emergency braking has been added to the forward collision warning system on 2016 Sonata models. A new 7-inch color touchscreen audio system for 2016 includes an Android Auto smartphone interface. The 2016 Sonata Limited gets the Sonata Sport model’s more aggressive front bumper.

Hyundai continues to offer a Sonata Hybrid sedan, with similar updating for 2016, but also has added a new Sonata Plug-in Hybrid, capable of traveling up to 24 miles on battery power alone.

One of the lighter cars in its class, Sonata was among the first to adopt a lineup with nothing but four-cylinder engines. The base 185-horsepower, 2.4-liter four and the turbocharged 245-hp 2.0-liter four are free-revving engines that deliver power fairly quietly, nearly free of vibration. Both mate with a 6-speed automatic transmission that provides smooth, quick shifts and has manual controls. Sport 2.0T models have paddle shifters.

Defined by the EPA as a large car, Sonata is marketed as a midsize. All Sonatas get a three-mode selector that alters shift timing, throttle operation, and power-steering assist through Eco, Normal, and Sport modes. Eco mode really impedes downshifts.

In crash testing by the National Highway Traffic Safety Administration, Sonata has earned five-star scores all around. All categories except the small-overlap test were rated Good by the Insurance Institute for Highway Safety.

All have seven airbags, including a driver’s knee bag.

With its more conservative exterior, the Sonata looks more sophisticated while lacking some of the prior generation’s exuberance. Some, however, say Sonata has become too bland.

Hybrids differ from regular Sonatas in several ways. Each change tends to be subtle, and was made largely to improve aerodynamics. Headlights have a different shape, as do the rocker panels. The Hybrid’s front end gets differently contoured fascias and horizontal grille bars. Eco-spoke alloy wheels are mounted, and an aero-style back bumper is installed.

Inside, the Sonata adopts a formal, attractive look, trimmed in satisfying grades of plastic and leather. Controls are grouped in specific zones, and the center stack is loaded with buttons and knobs. Trim pieces that resemble carbon fiber and aluminum fit in nicely. We can do without the available woodgrain trim.

Sonata is one of the roomiest midsize sedans, making better use of its interior dimensions than, say, a Honda Accord. Front seats offer plenty of space for six-footers. Seats are comfortable, too, helped by abundant bottom cushioning and bolstering, especially in the Sport 2.0T. Rear-seat occupants get ample knee room, though leg space isn’t quite as sizable. Rear headroom is fine for riders under six feet, if a little snug with a sunroof installed.

Storage bins abound, and the generous trunk holds 16.3 cubic feet of luggage, with handy seat-fold levers inside. Even at highway speeds, the relaxed cabin is quiet enough to permit front-seat conversations without straining to hear. Hyundai’s navigation system includes a split-screen view and the ability to record up to 22 minutes of satellite radio.

Light weight and a stiff structure help give gas-engine Sonatas a controlled, settled ride, neatly damped when rolling over bumps. Cross a train track at highway speed, and the Sonata’s suspension complies to the assault with little drama.

Hyundai’s 2.4-liter engine lets the Sonata wind out eagerly and smoothly, though it’s not especially swift. Undeniably stronger than the base engine, the 2.0T four-cylinder is smooth for a turbo four, and nearly vibration-free.

Performance is surprisingly spirited with the Eco, which can strain a bit but still feels eager. You barely notice shifts from the dual-clutch transmission, except at very low speed, but steering feel is significantly lighter than in a Sonata Limited.

Hybrid drivability and smoothness have improved considerably. The Plug-In Hybrid delivers especially good performance, and a useful charge-restoring mode, though it cannot be locked into EV mode.

Using a conventional 6-speed automatic transmission, Hyundai’s Hybrids, despite extra weight, now accelerate and respond more like gas-powered sedans. The gasoline engine has shrunk to 2 liters in this second Hybrid generation, and capacity of the lithium-ion polymer battery has increased. Total system output is 193 horsepower. In electric mode, the transmission shifts up and down in the usual way, and if climate control is on, it’s not so easy to tell when the gas engine is starting or stopping.

Hybrids are close to silent. Ride quality leans toward the soft side; but well-damped and free of bounciness. You can check state of charge via a smartphone app. Plug-in Hybrids also have a dash-top charging light. Charge time is under three hours at 240 volts (Level 2), or nine hours at 110 volts.

The electric steering on the Sonata Hybrid is light and has no feel, like steering a wheel on a video game.