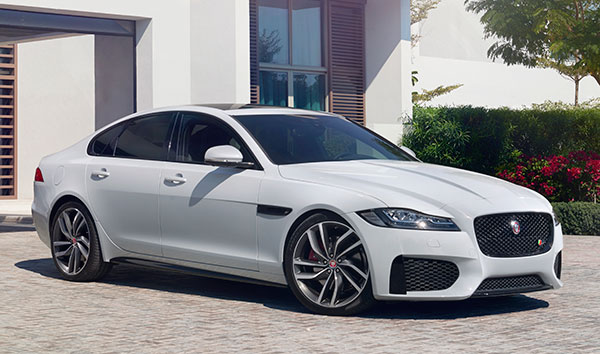 The all-new 2016 Jaguar XF is a luxury midsize sedan that competes with the Mercedes-Benz E-Class, BMW 5 Series, Audi A6, and Cadillac CTS. The first generation ran from 2009 to 2015, and was well received, often called the most beautiful in its class, but it was still a step below the Benz, BMW, Audi and Cadillac.

Like other Jaguars, in particular the F-Type sports car, the new XF is made of aluminum glued and riveted together. Strong and light, this structure enables the car to be quick and nimble. The XF weighs about 250 pounds less than before, with 50-50 balance. It supports a twin-wishbone front suspension for supple dynamics. The aluminum chassis allows other improvements, for example a roomy back seat and big trunk, in a car that’s a bit shorter than before.

There are two specs for the engine, either 340 horsepower and 332 pound-feet of torque, or 380 hp with the same torque. The latter is an all-wheel-drive hot rod that can do zero to 60 in 5.0 seconds, with a top speed you can only imagine what might be, since it’s electronically cut off at a mere 155 mph. (Coming soon are a couple of four-cylinder engines, one of them a turbodiesel promising 40 highway mpg.)

Fuel economy with the standard supercharged V6 engine is an EPA-rated at 20/30 mpg City/Highway, or 24 mpg Combined. With all-wheel drive, it’s 20/28 mpg, or 23 mpg Combined.

The XF had not been crash tested when this was published, but the bonded-riveted aluminum chassis has proven to be safe. And the XF offers solid safety technology, with surround-view cameras, LED headlamps and head-up display, as well as adaptive cruise and blind-spot monitors, and autonomous braking.

All-new, the 2016 Jaguar XF is spare and elegant in appearance. The extended rectangular grille is flanked by slim headlamps that arc upward to air intakes. It looks a lot like the smaller, all-new 2017 Jaguar XE, but with a longer roofline and forward-sloped pillars, allowing a big rear window. Steep fascia slims the rear end, with twin circular taillamps.

Inside, the elegant and boat-like curve of the dashboard draws the driver in, to a display that is dominated by touchscreens to manipulate Jaguar’s new interface called InTouch. More expensive models use a TFT display behind the steering wheel, instead of gauges. The air vents are slim, in order to make room for that 10.3-inch touchscreen atop the center stack. The standard touchscreen is 8.0 inches. The upscale instrument panel is like the Range Rover’s, and hugely upgrades the infotainment system, including a WiFi hotspot in the car.

The screens are clean and rectilinear, sharing the space with spartan switches organized in small strips and clearly identified for climate and audio. It’s a blessing, as the Germans keep adding clickers and chrome to their instrument panels.

There’s lot of room inside, especially in the back seat and trunk. The Jaguar XF seats four comfortably. The trim options are broad, so you can make your British Jaguar feel German, Scandinavian, or bawdy in lipstick red leather.

We drove the Jaguar XF in Spain for hundreds of kilometers over smooth roads in the Basque country, and on the pristine Circuito de Navarra racetrack. The XF is composed and clear headed, instantly comfortable, reassuring at speed. The XF has hardcore talent glued and riveted into its aluminum. The handling is sublime, more supple and forgiving than the Cadillac CTS VSport and Audi S6 or S7.

The available adaptive suspension helps, with electronically controlled air dampers. So do the driving modes, which set the aggression level for the throttle, transmission, steering and suspension. There’s Economy, Normal, Sport and Track modes, plus Launch mode.

The new XF might be way better than before, but we still want the vivid acceleration of a V8, in the R model. We want it all. It’s not that we don’t like superchargers, whose soft whine helps hide the grotty V6 rumble. It’s a British world of noise and vibration, but neither of much, with a balance shaft in the engine and a lot of insulation to blot up the sound that’s neither evocative nor objectionable.

We also drove the upcoming turbodiesel in Spain. It’s quick enough, at 7.7 seconds to 60 mph, and the torque comes on from 1750 and 2500 rpm, but it only revs to about 4500. You have to work those paddle shifters in the 8-speed. It just doesn’t feel like a Jaguar. We wonder how it will be received.

The all-wheel drive is chain-driven. The traction control is novel. The stability control has torque vectoring, which brakes an inside wheel in corners for better response.

If you like touchscreens and supercharged V6 engines, the Jaguar XF brings it all, because the rest is all good, with beauty, speed, sublime handling and a spacious interior.