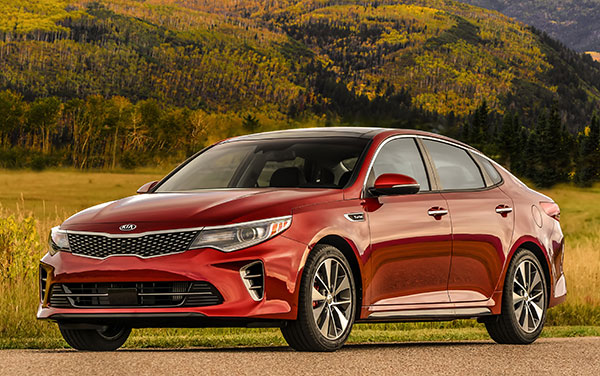 The Kia Optima is all-new for the 2016 model year. Road and engine noise have been quelled and the 2016 Optima boasts one of the most refined interiors in the midsize sedan class.

Though improved by nearly any measure, the 2016 Kia Optima is not distinctive in appearance. Its styling has evolved only mildly from the previous generation, so its form seems stuck in the past. While fine-tuning every detail of the sedan, Kia evidently preferred not to risk deviating too much from a car that had achieved impressive success. Underneath, however, the 2016 Optima qualifies as all-new.

Buyers can expect a quiet, nicely composed ride and a compelling value argument.

The 2.4-liter engine, available in Optima LX and Optima EX models, produces 185 horsepower and 178 pound-feet of torque. The 2.0-liter turbo generates 245 horsepower and 260 pound-feet. Both engines are slightly reduced in power, but retuned for better drivability for 2016. Each comes with a 6-speed automatic transmission. A powertrain switch has Eco, Normal, and Sport settings.

The 1.6-liter turbo, available for Optima LX, makes 178 horsepower and 195 pound-feet of torque, and comes with a 7-speed dual-clutch transmission that works like an automatic. Kia claims greater fuel-efficiency and a sportier feel, but we recommend 2.4-liter models for most buyers. Of course, we prefer the most expensive engine, the 2.0-liter turbo, which we found especially strong and smooth.

Building upon its superior safety reputation, the Optima has a huskier structure and way more high-strength steel, and may be equipped with new active-safety features.

Optima LX 2.4 ($21,840) comes with the 2.4-liter engine, a rearview camera, air conditioning, six-speaker audio, Bluetooth, and satellite radio compatibility, as well as 16-inch alloy wheels. Optima LX 1.6T ($23,990) upgrades to the dual-clutch automatic transmission and 1.6-liter turbocharged engine. (All prices are MSRP and do not include destination charge.)

(The Optima Hybrid has been dropped, but it’s expected to return as an all-new 2017 model.)

While most midsize sedans have grown more interesting visually, the 2016 Optima stands out less sharply. For its fourth generation, designers appear to have followed a careful, mildly evolutionary path.

Despite modest visual change for its 2016 redesign, Optima continues many design themes that were formerly forbidden in sedans. Consider the curvaceously swoopy, coupe-like roofline, the rear-tapering greenhouse, and proportions that echo a rear-wheel-drive sports sedan.

Front/rear styling touches and softer-looking sheetmetal result in a design that’s matured. Modestly longer, taller and wider, the 2016 Optima is slightly more spacious and comfortable than before. Long rear doors make entry/exit easier than in most midsize sedans.

Evidence of the 2016 redesign is more noticeable inside. The front seats have improved, due to better use of space. Seating comfort is quite nice, courtesy of a new seat design with longer lower cushions and greater side support.

The rear seats aren’t the most comfortable. Cushions are a tad short and flat, as well as low, leading to knees-up posture and taller folks’ heads hitting the headliner.

Trim pieces, buttons, and switchgear are markedly improved. Less segmented than before, the instrument panel isn’t as slanted toward the driver.

In addition to abundant space, Kia offers one of the quietest and most refined interiors in the midsize sedan class. That’s quite a change, as the prior generation’s cabin was among the noisiest.

Rotary knobs are used for audio volume and tuning, as well as temperature settings. Gauges are legible, and touchscreens are comparatively intuitive.

Compared to rival sedans, the 2016 Optima feels responsive and nimble. Ride quality has been improved by moving suspension mounting points outward, on the stiffer body. Therefore, the 2016 Optima feels more compliant over mild bumps, as well as less bouncy over potholes and train tracks. Though not sporty, the Optima boasts an appealing ride/handling compromise.

Most enjoyable of the three powertrains is the 2.0-liter turbo, in Optima SX and Optima SXL trim. Its 6-speed automatic upshifts smoothly and downshifts promptly, with paddles to change gears manually.

Turbocharged performance mixes with thriftier fuel economy in the Optima LX 1.6T, but hesitation in the dual-clutch transmission interferes with drivability. On curves and hills, that version tends to struggle. Parking is clumsy and frustrating.

Optima LX and Optima EX models get the 2.4-liter direct-injected four-cylinder engine, mated to a 6-speed automatic. Most buyers should welcome this team’s smooth responsiveness, though the transmission will tend to downshift more often than with either turbo.

Value is a strong point. Each Optima contains more standard features than some prime rivals.