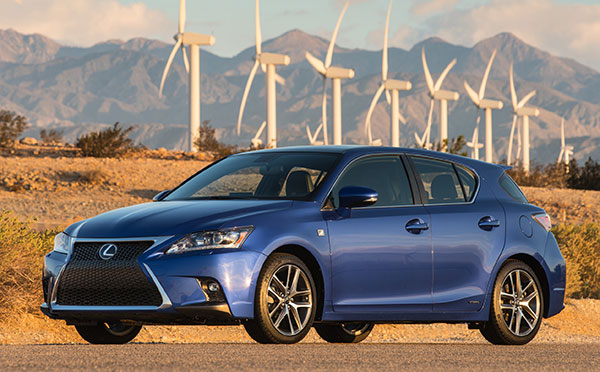 The Lexus CT 200h compact five-door hatchback hybrid has changed little since its 2011 debut, and it carried into the 2016 model year with minor feature updates, a newly optional moonroof, and a new chrome grille surround.

The Lexus CT 200h is a rarity in today’s market: a small luxury hybrid hatchback. It’s the smallest, lowest-priced model in the Lexus lineup, blending impressive gas mileage with a sporty character.

Fun to drive in Sport mode, the CT 200h is a likable and practical hatchback that handles decently. In real-world driving, 40-mpg fuel economy is easily achievable.

Sitting low on 17-inch wheels, the CT 200h has an assertive profile, with appropriate chrome trim and a long, flat roof that ends in a spoiler. Next to the CT 200h, many similar-size economy cars look drab and dull.

Gas mileage is where the CT 200h shines brightest. No other luxury compact comes anywhere close to its EPA estimate of 42 mpg Combined city and highway driving.

Stylish two-tone interior trim, bolder than in other Lexus models, may be accented by bamboo, black wood, or ash burl. In addition to the base model, an F Sport edition features special suspension tuning, as well as a variety of appearance extras.

The CT 200h gets top scores from the Insurance Institute for Highway Safety, which named it a Top Safety Pick Plus.

When introduced, the CT 200h came across as a slab-sided five-door hatchback with a handsome, sporty appearance. Front-end freshening for 2014 added a spindle-style grille, but changed nothing in the CT’s straightforward profile. All the styling elements seem to work together effectively.

With its low roof and thick pillars, the CT 200h blends two concepts: the company’s flowing L-finesse design language, and a saucy, semi-aggressive hatchback shape. Wrapping into the rear pillars, the back window has a particularly curious appearance. A long spoiler pushes the roofline above the abbreviated tailgate, while thinly tapered taillights convey a taut impression.

Attractive and functional, the CT 200h cabin is largely luxurious as well. Just a glance at the wealth of knobs, switches, and display screens demonstrates that the CT is a feature-packed luxury car, despite its compact dimensions.

Front seats are thick, supportive and spacious, helped by generous headroom. Because the CT is lower and shorter than a Toyota Prius, the driver gets a low seating position, though that can enhance the sporty feel. Legs wind up extended farther than they would be in an upright-oriented vehicle.

Back seats offer acceptable, but hardly expansive, space. Taller riders may struggle for comfort. Cargo space is limited by the high load floor, which covers the battery pack. Stuff in one too many grocery bags and the rearward view through the slit-like tailgate window starts to shrink.

Only a few bits of hard plastic detract from the rich materials quality on the wide console and well-laid-out dashboard. Lexus provides ample storage for miscellaneous items, but back-seat occupants lack cupholders.

Driven gently, in Normal mode, the CT feels neither sporty nor energetic. In Sport mode, it feels more animated; but that extra energy is accompanied by startling engine roar. Even when pushing lightly on the accelerator pedal, Sport mode provides full electric assist. As a result, the CT 200h feels friskier than its 10-second 0-60 mpg acceleration time might suggest.

If you can ignore the engine sound at higher speeds, it’s surprisingly fun to drive. Not only does Sport mode alter and improve powertrain behavior, it transforms the basic power gauge into a red-encircled tachometer for the gasoline engine. At lower speeds, with a light load, the electric motor can operate the CT 200h independently of the gas engine, at speeds up to 25 mph.

Except for engine noise, along with periodic steady-speed droning, the CT 200h is quiet on the road. Virtually no wind or road sounds enter the cabin. A continuously variable transmission sends power to the front wheels, with no paddle shifters to simulate the gears in a conventional transmission.

Even shorter drivers get a good view toward the front. Despite a shallow back window and thick roof pillars, rearview visibility is good, too.

Fuel economy is hard to beat, EPA-rated at 43/40 mpg City/Highway.

Lexus cut the base price for 2016, making the moonroof a $1,100 option, and the CT 200h is nicely equipped for just past $33,000 (including destination charge). Options are numerous, though, and can easily boost the total to $40,000 or more. For buyers who demand excellent economy, but dislike the drab nature of many hybrids, the stimulating CT 200h can be a revelation. A redesign is expected in the next year or two.