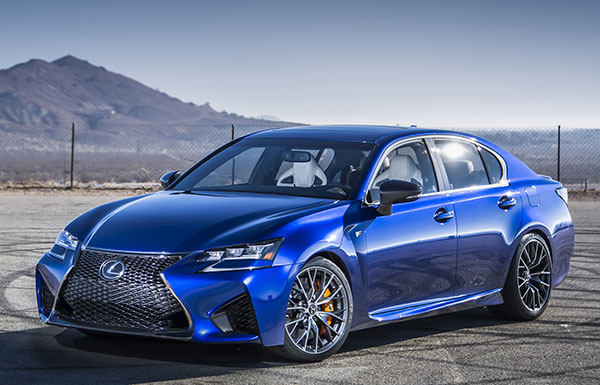 Introduced at January’s North American International Auto Show in Detroit, the 2016 Lexus GS F will be the latest manifestation of the F series strategy when it rolls into Lexus showrooms in late summer or early fall.

Having made its bones as a purveyor of first class luxury vehicles, Toyota’s Lexus division is now working to achieve recognition as a player in the luxury performance slice of the business. That’s what the F designation is all about. It’s the Lexus answer to AMG operations at Mercedes-Benz, where standard models get the go-faster treatment. And it’s also a response to a market segment that’s highly profitable and growing steadily.

The upcoming Lexus GS F will be the latest, but not the first member of the mid-size GS sedan lineup to wear the F badge. That distinction belongs to the GS 350 F Sport. But if high performance is the objective, the GS F promises to provide a much more compelling experience.

The key distinction between GS 350 F Sport and GS F can be found beneath their hoods. The GS 350 F is propelled by a 3.5-liter V6 generating 306 horsepower and 277 pound-feet of torque. Allied with the new 8-speed automatic that became available in 2014, a GS 350 F Sport can be expected to reach 60 mph in a little over 5.5 seconds. That’s respectable, but not enough to challenge in the realm Lexus wants to invade, exclusive high performance turf populated by rides like the BMW M5, Cadillac CTS-V, Jaguar XFR, and Mercedes-Benz E63 AMG.

Appropriately, the Lexus GS F brings a much bigger punch to the free-for-all: a 5.0-liter V8 rated for 467 hp and 389 pound-feet of torque, channeling thrust to the rear wheels via the new 8-speed automatic. It’s essentially the same powertrain that propels the formidable RC-F coupe, which joined the Lexus lineup for 2015.

We found this a very willing powerplant in the RC-F, and it’s sure to lend urgency to the GS F’s forward progress. (The RC-F has been clocked from 0 to 60 mph in 4.3 seconds.)

Other upgrades include structural stiffening, according to Lexus, and firmer suspension tuning. Also, the Lexus Torque Vectoring Differential (TVD) is standard equipment, enhancing transient response and reducing the anxiety that goes with arriving a little too hot at a decreasing radius corner.

There isn’t much to distinguish the GS F from the more prosaic members of its family. Specific aluminum alloy wheels, tweaks to the front fascia, F badging, and it’s fair to say the orange brake calipers are unique.

Will the sum of the upgrades add up to a luxury sports sedan capable of contending with the established players in the game? Although most of the benchmark competitors bring more power to the game, Lexus claims the GS F will be about 300 pounds lighter, give or take, than its rivals.

Will price be an advantage? That seems unlikely, since the MSRP for the RC-F is similar to that of its targeted rivals, the BMW M4, Mercedes C63 AMG, and Audi RS5. The would be in the mid-$60,000 range.